Are You a Candidate for Donald Trump's Coronavirus Vaccine? 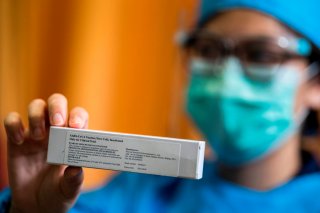 There are reports that coronavirus vaccines might be available in a few months. Thus, there must be deliberations over who will first have access to the vaccines. The Centers for Disease Control and Prevention is consulting with the Advisory Committee on Immunization Practices (ACIP) on how the first 1.2 million vaccine doses should be distributed. The ACIP includes fifteen representatives from consumer groups, vaccinology, immunology, pediatrics, internal medicine, nursing, family medicine, virology, public health, infectious diseases, and preventive medicine. The ACIP is reported to recommend medical and national security personnel be granted first priority, then other essential workers, and then high-risk individuals such as the elderly and those with underlying medical conditions.

This high-power panel has not considered a rather elementary question, namely, what the vaccine will cost—and who will pay for it. Some corporations have informed Congress that they would sell the vaccine at no higher price than needed to cover their costs. One notes that costs are notoriously open to rather wide interpretations. Other corporations stated that they would seek profits, although they promised to take into account that these are extraordinary times. Among the corporations that announced that they will seek to profit from the vaccine is Moderna, which received $483 million from the government to cover, at least in part, the costs of developing the vaccine.

The coronavirus vaccine will be provided free of charge to Americans who cannot afford it, according to the Trump administration. The administration states that a free vaccine will be available to any American who is “vulnerable, who cannot afford the vaccine and desires the vaccine.” The administration claims to be working with insurers, who—a Trump official suggested—expressed “eagerness” to cover the vaccine without a co-pay. This still means that all other people will compete in the marketplace for scarce vaccines, at prices to be set by the pharmaceutical companies, known for seeking very hefty profit margins, allegedly to cover research and development costs, but often also covering very high promotion costs. Moreover, in this case, a good part of the research and development outlays are paid for by very generous grants from the government, keen to have vaccines before the election.

Consumers must note what happened with Remdesivir, a drug that mitigates the effects of the coronavirus. Gilead, which makes the drug, first donated a number of vials to the government, but then started charging $520 for each vial, amounting to $3,120 for each needed treatment. And one must recall that, when the Federal Emergency Management Agency gained medical supplies for fighting the coronavirus from overseas, the Trump administration turned these supplies over to private companies to sell to the highest bidder.

As I see it, if the federal government is to purchase the vaccines, it would be the only domestic buyer, and a truly massive one, so it should be able to gain a fair price (unless the lobbyists prevail again). Then, the federal government should provide the vaccines to Americans without any charge. In effect, the administration has made one such deal with two drug manufacturers. It awarded $2 billion to Pfizer and a German drug manufacturer, with the understanding that if they come up with a vaccine, the government will get the first batch for $1.95 billion, and these vaccines will be distributed for free to the public. However, no such deal is in place with many other companies that are rushing to make vaccines. It should be. The government could set a price for the vaccine according to a sliding scale or a means test, but this raises ethical and implementation issues. Instead, the government could provide the vaccine free for all Americans, while also setting a value for it, requiring recipients to report it as taxable income. Hence, people in higher tax brackets would in effect pay some for the vaccine, reducing the costs of the program to the public.

The most contested issue is whether minorities, such as Blacks and Hispanics, should be given priority over white people in getting vaccines. These groups experience an infection rate that is three times higher than that of whites and a death rate almost twice as large. These differences are largely attributed to socioeconomic inequities; that many members of these groups have jobs that do not allow them to quarantine safely; live in crowded homes, and must rely on public transportation, all of which will increase their exposure to the virus. Furthermore, they suffer from a high prevalence of underlying health conditions, such as diabetes and obesity, which also increase their risk.

Those who oppose placing minority groups in a preferred position are worried that relying on race and ethnicity as a criterion for allocating the first vaccines would lead to legal and political challenges. The Trump administration would surely not consider such an approach in the first place. A Biden administration will have to consider the political backlash from those large White groups who already feel that they are routinely discriminated against, those who feel that “The System” favors minorities and immigrants.

Dr. Tia Powell, Director of the Montefiore-Einstein Center for Bioethics, raised another concern. Participating in a recent zoom dialogue titled Health Care Rationing and End of Life Decisions: Who and How?, she warned about the wariness of African Americans, who are still smarting from the memory of the notorious Tuskegee study, in which the United States Public Health Service observed hundreds of African American men with syphilis for forty years, under the guise of providing free health care, letting them go untreated for decades, even after a cure became widely available. New vaccines can sometimes turn out to be “bad,” Powell said, hence specifically steering a potentially risky new vaccine to black Americans could have dire consequences not just for their health but also for their trust in public health authorities.

Dr. Harald Schmidt, assistant professor of medical ethics and health policy at the University of Pennsylvania, notes that “Whether we are rationing ventilators or vaccines, the allocation has to be sensitive to social justice. We can’t pretend that the huge disparate impact we have seen across racial and income groups in terms of coronavirus-related unemployment, illness and deaths hasn’t happened. We have an opportunity to move more towards valuing lives more equally, and we shouldn’t pass this opportunity up-prioritizing worse off communities.” To proceed, he favors using measures such as the Area Deprivation Index to create an allocation scheme that is both feasible and legal. The ADI combines income, education, employment, and housing quality data and can be used to identify priority groups. While courts would likely bar prioritization on race alone, similar approaches have been used in related settings, for example, in making college admission more equitable. In this way, a poor White person may get it while a Black billionaire may not. Still, most of the doses of the first viable vaccine (beyond those to healthcare workers and national security personnel and essential workers) would flow to those whose socioeconomic conditions indicate that they are most in need, effectively prioritizing many people from minority backgrounds while avoiding the legal challenges race-based allocation would face, and—maybe –the political backlash.

In an op-ed published by the Washington Post, a group of leaders, including the prime ministers of Canada, Spain, Sweden, Tunisia, and New Zealand and the Presidents of Ethiopia, South Korea, and South Africa, called for “equal access” to the vaccine for people of developed and less developed nations. This may seem very unlikely to happen, especially for the first million vaccines. However, Dr. Joanne Lynne, a policy analyst for the Program to Improve Eldercare at Altarum, pointed out that we do not know which nation will be the first to come up with the vaccine. Hence, now is the time for all nations to commit themselves to a fair international distribution system. Such an approach would delight the followers of John Rawls, considered the greatest liberal thinker of his generation, who called for ethical decisions to be made from behind a “veil of ignorance,” arguing that we should make choices as if we did not know which gender nationality, race, etc. we would be born into.

These are complex and hefty issues. The time to face them is now before the first million vaccines are rolled off the assembly lines. The deliberations should not be limited to a small group of specialists but should involve the public at large, through a series of virtual town hall meetings and congressional hearings.