Argentina Staggers to Another IMF Agreement 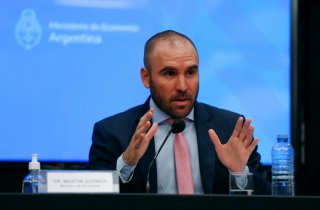 Argentina has reached an accord with the International Monetary Fund (IMF) to restructure the enormous debt which it owes the institution. An agreement in principle was reached on January 28, 2022, just before a series of large payments were due, which would have put enormous strain on the country’s depleted reserves.

For weeks, Buenos Aires newspapers had covered meetings leading up to this agreement between IMF officials and the Argentine economy minister. The views of various officials at the IMF and the U.S. Treasury Department were meticulously parsed; Economists invoked reports from Wall Street analysts, government officials sought to project calm, and politicians thundered warnings, while ordinary Argentines sought to lead their lives and protect themselves from economic turbulence.

While the crisis played out, the exchange rate for dollars on the street climbed to over twice the official rate. Inflation rose to 51 percent, one of the highest in the world. Restrictions have been maintained on using dollars for vacations outside of Argentina—in the middle of the Southern Hemisphere summer. Price control programs on key consumer products were tightened, then loosened, and then tightened again.

As Argentines now catch their breath, it is worth asking how it came to this. This has been a chronicle of a crisis foretold, as this will be Argentina’s twenty-second agreement with the IMF since 1958. The immediate causes date back to the previous government of President Mauricio Macri. A businessman (and heir to wealth) and former president of leading soccer team “Boca Juniors” (no small thing in sports-crazed Argentina), he had led a center-right coalition to power in 2015, promising major reforms to restart Argentina’s sluggish economy.

Macri inherited a relatively clean slate financially from his Peronist predecessors, Nestor Kirchner (and after his death) his wife Cristina. Nestor had masterfully managed Argentina’s previous debt crisis, forcing private creditors to take a “haircut” on the debt Argentina owed. Like her husband, Cristina maintained payments on the reduced debt burden. But she made no effort to solve Argentina’s underlying economic difficulties—maintaining the complex and corruptly managed welfare state which had developed since the era of Juan Peron and persisted through both military and civilian governments. With a poorly performing economy burdening the Peronist candidate, Argentines seemed ready for the change that Macri promised.

A change was also welcome in Washington, which had opposed the Kirchners on issues both hemispheric (Cuba, Venezuela, Nicaragua) and global (in particular Iran, with which Argentina sought a rapprochement, despite evidence of Iranian involvement in the 1994 bombing of the AMIA Jewish community center in Buenos Aires which had left eighty-five people dead). Once in office, however, Macri had problems governing. He made payments to “vulture funds,” which had bought Argentine debt and refused to accept any “haircut” on payments. U.S. courts supported these efforts as well and held jurisdiction over the collection efforts. Further, prices for Argentina’s main exports—wheat, soya, and beef—fell while the country suffered from drought. Capital flight increased.

In 2018, Macri negotiated a huge bail-out package with the IMF—$57 billion, of which 44 billion were ultimately disbursed and spent to keep current with creditors and support Argentina’s currency. The IMF’s motivation to make its largest loan ever stemmed from a global desire to help Argentina achieve the sustainable growth that its rich natural resource endowment and well-educated population had always promised.

Also, the United States government wanted to support a rare friendly government in Buenos Aires after a long period in which Argentina was seen as little more than a regional troublemaker. Some also asserted that Macri’s personal relationship with Donald Trump, a fellow member of the international business elite, played a role.

But while Macri got his money, he was unable to revive Argentina’s economy. Commodity prices remained low and support for any drastic economic surgery was lacking both in Congress and the public at large, forcing him to maintain policies of very slow gradualism in reform. Accordingly, Macri’s popularity sank, and in 2019 he lost his bid for reelection to the Peronist-led coalition, which had nominated veteran politician Alberto Fernandez as president with Cristina Kirchner as vice president and, to a large extent, the power behind the throne.

The new government had to deal with the huge IMF debt overhang, the chronically under-performing economy, and the public health and economic crisis of the Covid-19 pandemic. Unfortunately, it bungled its handling of the pandemic by relying on Russian vaccines—which were slow in arriving—and reports that senior political leaders received priority vaccine treatment in addition to the fact that a birthday party was held for Fernandez’s wife in the Presidential Palace in the middle of a nationwide lockdown further undermined public confidence.

Debt management was placed in the hands of Economy Minister Martin Guzman, an MIT-trained economist and protege of IMF-skeptic Joseph Stiglitz. Guzman quickly negotiated a restructuring deal with Argentina’s private creditors. However, he was slow to strike a deal on the much larger debt owed to the IMF. Periodic payments were maintained, but with Argentina’s current repayment schedule clearly unsustainable over the long haul, negotiations began again.

However, instead of seeking to strike a deal quickly, Guzman let talks drag on for months at the technical level without presenting a formal, detailed plan—until recently. For his part, this may have been a strategy based on the theory that the longer he waited, the more obvious the country’s problems would be, and thus the better the deal he could get. Or it may have been simply a political decision that any new IMF program would be unpopular and should wait until after the November 2021 midterm congressional and gubernatorial races.

With time, however, the politics of negotiating with the IMF only became more complicated. The Peronist-led coalition fared poorly in the midterms, meaning that Fernandez and Guzman will need the support of the center-right opposition as congressional approval of the IMF deal will be required. Such support should ultimately be forthcoming as the opposition knows that the price of failing to approve an agreement would be high—further capital flight, disinvestment, loss of short-term credits used to import inputs for agricultural and industrial production, and ultimately even worse inflation, currency devaluation, and unemployment than the country faces now. Patriotic feelings aside, the prospect of winning the presidency in 2023 only to face a country in ruins cannot appeal to it.

That said, opposition leaders have said that while they support the agreement in principle, they will want to see “the fine print.” Doubtless, they will want to make sure that the government, which has consistently blamed the opposition for the debt crisis, will take its full share of responsibility for any of the pain which will be associated with complying with the IMF program.

At the same time, the politics among the Peronists may be equally messy. Vice President (and former president) Cristina Kirchner, who commands a powerful faction, has consistently played her own game. She is close to Guzman and, as a former president and senator, she is fully aware of the consequences of a break with the IMF. But populism in the tradition of party founder Juan Peron is her calling card. After the midterm loss, she stressed that any responsibility for reaching a deal with the IMF would rest with the current president and the congress, not with her.

More recently, she has gone after the opposition in harsh terms, saying that the “Macri pandemic” of borrowing from the IMF cost Argentina more than the Covid-19 pandemic. But she kept silent in the immediate aftermath of the deal’s announcement. While she is probably not in a position to oppose it frontally, she will likely distance herself from it and leave Fernandez and the opposition to take the heat.

The tortuous path to an agreement has failed to create confidence among either the international financial community or Argentina’s own public but probably does not affect the final outcome. The government argued that the IMF was at fault for making a huge loan in the first place to such an irresponsible government as Macri’s and demanded that it issue a report acknowledging its errors. The IMF subsequently released a report, something that it routinely does in such circumstances. However, it described its principal mistake as having overly relied upon Macri’s promises of reforms, as well as past Argentine promises.

The Argentine government also suggested that the IMF should abandon the surcharges it has made on especially large loans such as those to Argentina, as premiums for the greater risk. When the theme of such surcharges appeared on the agenda for its last board of governors meeting, this was ballyhooed as a triumph for Argentina’s financial diplomacy. But ultimately, the board made no change in its surcharge policy.

A trip by Argentina’s foreign minister to Washington to meet with Secretary of State Antony Blinken and National Security Council officials was extensively reported locally as an effort to get “political” officials to temper the views of Treasury Department “hawks.” But the U.S. agenda revolved around human rights and support for democracy. The Argentine government strained to find something new in the final U.S. press statement which called for Argentina “to put forward a strong economic policy framework that will return the country to growth.”