Armenia and Azerbaijan: On the Brink of War? 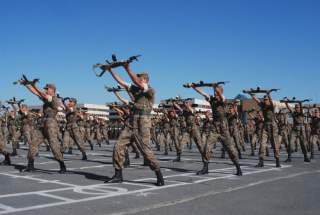 The messy business of post-imperial disintegration is not over. The eruption of Russian-Ukrainian hostilities is not the only case in point. The former Soviet republics of Armenia and Azerbaijan are at it again, too. And there may be a connection between the two conflicts, experts say.

After fighting a bloody war in 1988-1994, followed by “secession” of Nagorno-Karabakh (unrecognized by everyone, including Armenia), the occupation of seven Azerbaijani districts, known as the Lachin Corridor, and an uneasy cease-fire, the two countries have now been exchanging fire for over about ten days.

In a news environment dominated by much bigger and bloodier conflicts, such as the Islamic State (formerly known as ISIS), Syria, Gaza and Ukraine, the deadly news from the Caucasus is barely noticed.

However, the killing of fifteen Azerbaijani soldiers along the “line of contact” July 29-August 1 signified an escalation in hostilities. Casualties from retaliatory action, Azeri multiple-rocket launcher fire and overflights by the Azerbaijani air force, indicate that the situation may deteriorate quickly.

While the United States and the EU “expressed concern”, Russia’s Vladimir Putin decided to play peacemaker. He will meet with Azerbaijani president Ilham Aliyev and Armenian president Serzh Sargsyan in Sochi August 8-9 for separate talks. Despite a meeting between Aliyev and Sargsyan in Vienna in November of 2013, there is no progress in getting a permanent settlement—nor should one hold his breath over the Sochi summit.

UN resolutions and declarations to the contrary notwithstanding, the Armenian position remains implacable: no territorial concessions to Azerbaijan in Karabakh. Nor is Yerevan eager to return the seven non-Karabakh districts back to Baku.

Thus, despite the mounting frustration, the current status quo serves Armenia. Azerbaijan, flush with oil cash, has been building its military forces for years. Yet it is still insecure after the defeat twenty years ago.

With a $40 billion investment in onshore and offshore oil and gas, including the Baku-Tbilisi-Ceyhan oil pipeline spanning the Caspian and the Mediterranean, and the Trans-Anatolian Gas Pipeline, which will export over 30 billion cubic meters of gas to Europe, and will become operational in 2018, Baku is not seeking a new war.

However, the hostilities may not be accidental. Armenia is a faithful Russian ally. Recently, it rejected an Association Agreement with the European Union it painstakingly negotiated for three years, and signed up for membership in the Moscow-led Customs Union. In the future, Armenia is likely to join the Eurasian Union. Russian military bases remain on the Armenian territory through 2043, and Russian troops guard Armenia’s borders with Iran and Turkey.

Moreover, Armenia voted in support of Russia in the UN General Assembly regarding the annexation of Crimea. It may use Russia’s action towards the peninsula as a model for occupation and annexation of Karabakh. After all, Armenians may think, “if the Moscow metropolis expands its network of unrecognized, secessionist satellites or annexed territories (Transnistria, Abkhazia, South Ossetia—and now the Crimea), why can’t Armenia annex Karabakh?”

Azerbaijan, on its part, cast its lot with the West—for now. Not only has it allowed unprecedented access to its hydrocarbon resources to BP and other Western energy companies, it has strong economic and military ties with the United States.

Baku allowed its airport to become a massive trans-shipment point in the Northern Distribution Network, which supplied Afghanistan, and Azeri troops were deployed there side-by-side with NATO troops. Azerbaijani soldiers also were deployed to Iraq. Azerbaijan, a secular, majority-Shiite country, has close relations with the Sunni Turkey and with Israel, and imports tens of billions of dollars’ and euros’ worth of Western goods, including Boeing airliners.

Yet, it is energy exporting that defines Azerbaijan’s geopolitical importance. The border clashes between Azerbaijan and Armenia are likely to remind the West that Russia’s oil- and gas-sector sanctions, imposed because of the occupation of Crimea and the support of pro-Russian separatists in eastern Ukraine, may have “unintended consequences.” The distance from the Armenian border to the Baku-Tbilisi-Ceyhan oil pipeline can be covered by a day or two of a successful tank corps thrust. Even recurrent rocket and artillery barrages can threaten the BTC and the TANAP gas-pipeline development.

The diplomatic tool to resolve the hostilities between Armenia and Azerbaijan, the “Minsk Group,” which includes the United States, Russia and France, is now obsolete. It was created in the 1990s, when diplomatic cooperation between the United States and Russia was a norm, not an exception. Alas, times have changed. Hostility between Moscow and Washington, and for that matter, Russia and the EU, unfortunately makes joint diplomacy all but impossible.

With U.S. attention split from China to Ukraine and between Al Qaeda, Hamas, the Islamic State and Al Shabab, there is only so much Washington has the bandwidth to do. Putin’s peacekeeping in Sochi is likely to put a Band-Aid over the current hostilities, while it is not in Russia’s interest to bring the sides to permanent resolution of the conflict, pack up the military base in Gyumri and go home. Nor would Armenia want that, facing Turkish hostility, the unacceptable Turkish narrative over the 1915 tragedy and a closed border with Ankara.

The Obama administration, seeking a diplomatic achievement, may decide to pursue a complex diplomatic scenario, in which Armenia returns the seven occupied Azerbaijani districts to Baku. This can be done in exchange for opening the blocked border for trade with Turkey and the EU, and the regional infrastructure integration for Yerevan, including connections of its energy and transportation grids to Azerbaijan-Georgia-Turkey networks of pipelines and railroads.

Without trade and investment, Armenia is doomed to underdevelopment and mass emigration to Russia, Europe and the United States. Unfortunately, today, Russia is unlikely to approve such a win-win solution, dooming the long-suffering neighbors to further strife.