Armenia Prepares a Red Line in the Caucasus 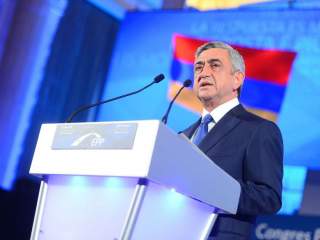 The Armenian government has approved a bill recognizing Nagorno-Karabakh’s independence, sending it to the parliament. This decision has raised concerns among leading international and regional powers. Azerbaijani state media suggested that the recognition of Karabakh’s independence would lead to the resumption of large-scale hostilities. In turn, Secretary of State John Kerry and Russian Foreign Minister Sergey Lavrov said that the resolution of the Karabakh-Azerbaijani conflict must be found through negotiations within the OSCE Minsk Group. Meanwhile, the Armenian side has announced that it is not afraid to recognize the Nagorno-Karabakh Republic (NKR), and that it is determined to take this step under certain circumstances. Thus, Yerevan’s officials are pushing a diplomatic ultimatum on the international community for the first time in the last twenty years, painting its own red line for the OSCE Minsk Group.

Many Armenian politicians and experts say that recent clashes along the Karabakh-Azerbaijani line of contact demonstrated the one-sided and passive attitude of the permanent cochairs of the Minsk Group—France, Russia and the United States. For a long time, Yerevan turned a blind eye to the passivity of the intermediaries, and made successive statements of its commitment to the peaceful resolution of the conflict within the Minsk Group. Today, the situation has changed. Yerevan is dissatisfied with the fact that the international community has not given a clear political assessment regarding Azerbaijan’s aggression, preferring instead to appeal carefully to both sides. The Armenian side believes that Baku regards such an approach as a green light for further escalation. In such a situation, Yerevan needs to take more decisive steps. That is strongly demanded by Armenian society and influential organizations in the diaspora. President Serzh Sargsyan understands that showing weakness at this stage may lead to unpredictable consequences, both for the country and for the ruling regime.

The logic of the Armenian public stems from the fact that any bad head of state can be forgiven for economic or social problems if the leader firmly defends the country’s national interests in the international arena. In the current situation, any territorial concessions will be perceived as a national betrayal that will lead to the inevitable fall of the existing regime. In the case of Azerbaijan, the situation is different. For President Ilham Aliyev’s clan, Karabakh has an exclusively political value that allows them to maintain the internal legitimacy of their regime. On various international platforms, Ilham Aliyev has always stressed that nobody in the world recognizes the independence of Karabakh, including Armenia itself. In fact, for Baku it is not the territory of Karabakh that matters, but the legal opportunity to call it a part of Azerbaijan with the support of the international community. Such a situation would suit the Armenian side de facto, and satisfy the Azerbaijani side de jure. However, some adjustments have been made since the beginning of April.

Recognition of the NKR at the local level in the United States began in 2012. As of today, seven U.S. states—Maine, Rhode Island, Louisiana, Massachusetts, California, Georgia and Hawaii—have adopted resolutions “in support of the independence of the Nagorno-Karabakh Republic.” On one hand, foreign-policy resolutions of individual states are advisory in nature, and do not reflect the official position of the United States. On the other hand, the adoption of these acts could not be possible without the consent of official Washington. For example, the White House has long blocked all of the Armenian lobby’s repeated attempts to hold a resolution on Karabakh recognition in California, out of fear of worsening relations with Baku. Thus, the United States officially supported the territorial integrity of Azerbaijan, but neither did it hinder the development of local recognition of the Nagorno-Karabakh Republic’s independence.

The Azerbaijani authorities, using their lobbyists in different states, have also tried to carry out a resolution on “support for territorial integrity,” to devalue the importance of pro-Karabakh resolutions. However, all the pro-Azerbaijani lobby’s attempts turned out to be failures, except for a resolution on strengthening cooperation with Azerbaijan, which was adopted by Arizona. These failures are now accompanied by an economy decline, due to the fall in oil prices and the mass arrests of journalists and political opponents of President Aliyev. The United States criticizes the human rights situation, and the most significant figures of the world’s leading powers declined attendance at the European Games in Baku.

Facing such difficult conditions in domestic and foreign policy, Aliyev should be more active on the Karabakh front, proving his viability and decisive nature. Provoking aggression on the line of contact with the Nagorno-Karabakh army, Aliyev’s regime receives domestic dividends while checking reactions from the Minsk Group and Armenia’s allies in the Collective Security Treaty Organization (CSTO), especially Russia.

Once again, Azerbaijan has managed to solve a number of political objectives. The level of trust in President Aliyev increased substantially. At the same time, Armenia has not received the support it expected from its partners and allies in the Collective Security Treaty Organization and the Eurasian Economic Union (EEU). Moreover, the United States and France have not applied any political sanctions to Baku.

Of course, in such a situation, the Armenian side has to act more decisively. Its allies in the CSTO and EEU hinted that their lack of support to Yerevan was due to the fact that Karabakh is not a part of Armenia. This logic is also guided by the fact that Moscow supplies Azerbaijan with modern offensive weapons worth up to four billion dollars. Russian politicians and experts believe that they fully kept their promise, as Russian weapons were not used directly against the Republic of Armenia.

Therefore, Yerevan has no choice but to recognize Karabakh’s independence, with its ensuing inclusion into Armenia. Under these circumstances, any future war will be held not on the territory of Karabakh, but in Armenia itself. What will Russia choose to do in that situation? It will have to intervene, or else lose its crucial and sole ally in the Caucasus. Yerevan did not take such drastic steps before, in order to avoid putting its allies and partners in an unpleasant situation, and still hoping for support in times of crisis. Armenia’s recognition of Karabakh catches the two other cochairs of the Minsk Group, the United States and France, by surprise. Washington and Paris will have to become more actively engaged in this process, taking into consideration the powerful, rich and well-organized Armenian lobby.

Thus, Yerevan, in recognizing Karabakh, demands that Russia, the United States and France be more active in the negotiating format, giving objective political assessments in certain situations and applying appropriate sanctions for failing to comply with the existing conditions.