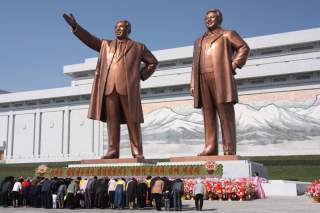 Asia might be becoming the center of economic gravity, but not every nation is sharing in the boom. While each have their own problems, these top five Asian economies that will be in trouble by 2030 all share a dependency on commodities, which, barring another boom, could place them in the economic danger zone.

No surprises that the “hermit kingdom” gains the unwanted ranking of Asia’s most troubled economy. Ruled by a despotic communist dynasty, North Korea ranks last on most measures, including the Heritage Foundation’s 2016 Index of Economic Freedom, where it earned a mere 2.3 points out of 100 (even second-lowest Cuba had 29.8 points).

In addition to being the worst country in the world to do business, citizens have no property rights, and private enterprise is largely frowned upon in a nation with estimated per capita GDP of only $1,800.

To curb hyperinflation, in 2009 the state revalued its currency, the won, by moving its decimal point two places to the left, wiping out the savings of the entire population.

Even its friends are deserting the regime. In April, China, which receives an estimated 90 percent of North Korean exports, announced it would participate in UN sanctions against North Korea, barring further imports of resources such as coal and gold.

Barring a regime change, the nation ruled with an iron fist by supreme leader Kim Jong-un is unlikely to climb up the economic rankings anytime soon.

However, the recent commodities downturn has reversed the picture for the Pacific nation with per capita GDP of $2,700. The Asian Development Bank (ADB) expects Papua New Guinea’s growth rate to fall from nearly 10 percent in 2015 to 2.4 percent in 2017, while the IMF sees this slowing further to only 1.4 percent in 2018.

The downturn in commodity prices, unchecked government expenditure, insufficient investment in infrastructure and protectionist monetary policy has left the country with high debt, low liquidity and a rising budget deficit. Corruption is another challenge for the nation of seven million, with the prime minister himself currently subject to an investigation into the misappropriation of public funds.

Like Papua New Guinea, Mongolia recently experienced a period of rapid growth, thanks to high commodity prices. Benefitting from the rapid industrialization of neighboring China, so-called “Minegolia” earned the title of the fastest-growing economy in 2011, with GDP growth exceeding 17 percent.

But a dispute with foreign investors over the massive Oyu Tolgoi copper-gold mine sparked a slowdown in investment and the eventual dismissal of the prime minister in 2014. Growth slowed to 7.8 percent in 2014 and only 2.3 percent last year, while just 0.8 percent GDP growth is expected for 2016, according to the World Bank.

With around one-fifth of the population below the poverty line, Mongolia needs to reduce its reliance on China, which receives an estimated 90 percent of its exports, mainly commodities.

Azerbaijan experienced a rapid increase in income and a reduction in poverty over the last decade, however with the crashing commodities of oil and gas accounting for 40 percent of GDP, the tightly ruled Caucasus nation faces an economic and budgetary emergency.

The former Soviet state faces the prospect of negative GDP growth this year, with only a modest 1 percent expansion expected in 2017. Like Mongolia and Papua New Guinea, Azerbaijan needs to diversify its economy beyond commodity exports to avoid an overreliance on high oil prices.

The ADB suggests strengthening financial institutions and encouraging lending to small- and medium-sized businesses as the most likely method of diversifying the Azerbaijani economy. However, structural changes, including market-based economic reforms and moves to counter pervasive corruption, will be essential if it is to join Asia’s winner’s list.

Much like Azerbaijan, the former Soviet state of Kazakhstan has been hit by plunging oil prices and a slowdown in Russia, with economic growth of just 1 percent in 2015 and with just 0.7 percent growth expected for 2017.

Ruled by Nursultan Nazarbayev since independence, the authoritarian leader has placed high hopes in investment from China under its “Silk Road” policy. The government has devalued its currency and announced business and labor reforms aimed at spurring investment, but concerns remain over bureaucracy, corruption and arbitrary law enforcement.

While the president’s “Kazakhstan 2050” strategy aims to position the nation of eighteen million among the top thirty global economies by 2050, citizens of the world’s most landlocked nation will be hoping it does not take that long.