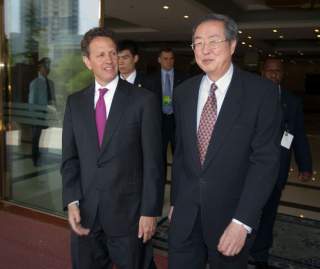 Central banks are not waging a currency war. Their actions, which may seem warlike on the surface, arise from far more benign motives. Many Central Banks have mandated inflation targets, and in most regions inflation is below target. With a slowing global economy, there had been few ways to keep inflation up to code. But a turn in U.S. monetary policy has made it possible for Central Banks to meet their policy goals by reflating their domestic economies.

Part of the issue is that the central banks who have missed their goals are the global economic heavyweights, whose policy shifts have a more potent effect on global markets than others. Europe is struggling with high unemployment, deflation, and a Greek epic with seemingly no end.  Japan has been stagnant for most of the 21st century and faces a truly horrific demographic profile. China is fighting to avoid the consequences associated with rising wages, slowing growth, and increasing deflationary pressures. The central banks of these nations are forced to take actions to thwart domestic economic catastrophes.

There are few reasons for global central banks to competitively devalue their currencies against the U.S. dollar. After all, the U.S. is the world’s buyer of first resort, and (with the Federal Reserve mulling a “lift-off” from the zero bound later this year) the U.S. Dollar’s value is likely to rise. Instead of waging a currency war, central banks embarking on new or additional quantitative easing (QE) packages—Japan and the EU—may be making a legitimate attempt to meet their mandates.

QE tends to increase the prices of domestic assets and lower yields on sovereign debt. Under the U.S. program, prices of assets from equities to housing moved higher, inflation was steadily positive, and employment increased. Seeing how the U.S. withstood much of the global deflationary pressure (though it never quite reached its target of 2 percent inflation) and created jobs, it is reasonable that facing similar circumstances, other central banks would make a similar determination to increase domestic asset prices.

There is another issue at play here—namely, the U.S .dollar has not strengthened significantly in a long time. For the better part of the 21st century, the U.S. maintained a low exchange rate for an extended period of time to enhance economic competitiveness—which is to say—it acted like a developing country and waged its own quiet currency war. The current devaluation of global currencies is less of a currency war and more of a rush to benefit from something much of the world has been waiting for—the revaluation of the U.S.dollar. It is worth recalling the time that Japan spent dealing with the prolonged Yen revaluation. Now, the global economy, and the U.S., must come to grips with a dollar revaluation after it spent a decade holding down the dollar’s value.

In many ways, the U.S. dollar is acting as though it is emerging from a sort of “pegged currency regime.” The Fed maintained this “peg” marvelously well too—even without an explicit mandate or target. Essentially, the Greenspan/Bernanke Limbo Peg (how low can it go) ensured low interest rates and an active Fed. Now, the Fed has begun to abandon its peg, and central banks around the world do not know how to react.

No one has declared monetary war—yet. If there is the potential for one, China is likely to initiate it. As the U.S. economy was about to hit the Great Recession, many economists were calling for China to revalue the Yuan. China was building foreign currency reserves, and the America’s inability to compete was causing many politicians to cry currency manipulation. The weak dollar essentially allowed U.S. jobs to slowly bleed overseas—instead of flood. Now there is an increasing consensus that China will devalue its currency to spur exports. This would be the first true battle in a currency war. But it would be a reaction to appreciation versus the Euro and Yen—not the U.S. Japan would likely retaliate, but Europe would be unlikely to engage. The war would remain regional, but other players—namely the ASEAN nations—would be willing combatants.

At the moment, there is no currency war. While there is the risk that China devalues and, in doing so, spurs a competitive devaluation in Asia, the revaluation of the U.S. dollar and central banks acting in their own domestic best interest does not imply something more sinister. There may have been a few skirmishes, e.g. Japan’s Halloween announcement of an easing package was strategically timed. But central banks have few options to spur domestic inflation and growth in economies facing slowing global demand and lower commodity prices. If U.S. monetary policy is persistent in deviating from the direction of the rest, other monetary authorities with easing policies will appear hostile.

But they are not. Instead, the world’s reserve currency is reversing years of loose monetary policy and China, the world’s driver of economic growth, is slowing. This forces economies to make all attempts to reflate their domestic economies and assets. It may appear to be a currency war, but these are the best efforts by institutions under-fire to meet policy targets. Competitive easing would give Japan and Europe an alternating advantage over each other, but the gains against the dollar would not be worth the trouble. There may be a currency war coming, but—for now—the markets are witnessing a violent return to dollar normalcy in a slower inflation and low growth world.