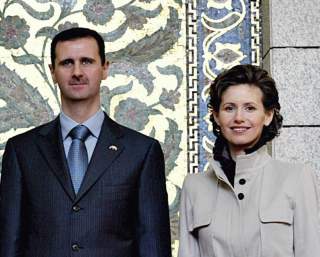 Last decade, Bashar al-Assad’s regime fooled Washington into believing that he would bring about reform. He did not. The lack of institutional and economic reforms led to the uprising and civil war in Syria.

It is a shame then that Assad is fooling Washington a second time, now arguing he is the lesser of two evils compared to ISIS, an argument that has influenced Secretary of State John Kerry, who is now calling for negotiations. Assad’s regime is just as bad as ISIS. If Washington falls for Assad’s manipulation and deceptions again, what will be the result?

The stakes are greater now than in the last decade and the security situation more tenuous, so why would anyone put trust in a regime that has not only failed its own people, but also blatantly conned Western leaders not once, but twice?

Assad’s “reforms” were nothing more than a thin cover for further corruption. There was never a real intention to improve economic or living conditions. Not only was the international community fooled, but many Syrians bought into the lies. It did not take long for the “ophthalmologist” to be proven short-sighted as protesters took to the streets in Damascus in February 2011 chanting “Syrian people will not be humiliated!” Forty percent of Syria’s population was living under the poverty line and more than twenty-five percent of young men were unemployed. Consequently, many Syrians were immigrating to neighboring countries looking for work and a better life.

According to United Nations Development Programme (UNDP), between 2003-2004, two million Syrians could not obtain basic needs. Fifty-six percent of Syria’s rural population depend on agriculture for survival, and in 2004, more than seventy-seven percent of them were landless. Today, the situation is substantially worse despite Assad’s June 2014 referendum campaign dubbed “Sawa” to “improve” Syria’s economy. In fact, the overall poverty rate has now reached eighty percent.

Shopping malls and high-rise hotels were purposely built in Damascus to fool tourists, journalists, celebrities, and goodwill ambassadors. Even elites and upper-class families found shopping at these malls too expensive. The middle-class was crushed during Assad’s “reform era” and the gap between rich and poor was growing ever wider. In contrast, the families of the regime and its allies were making billions. The era of pseudo-reforms led to a mass exodus of the population to the cities, which only became more acute during a drought last decade.

With the rise of ISIS and its open brutality, the United States has stopped calling for the overthrow of Assad and is actually now working together with Assad to “defeat” ISIS. This is the height of delusion. From the beginning of the uprising, the regime portrayed non-violent protesters as terrorists even though they were not. Assad needed to create the atmosphere, which would lead to the rise of more radicals in order to serve his narrative and “prove” that the choice boiled down to either him or the “terrorists.” Assad has been the godfather of ISIS and other jihadis. The regime guessed correctly that Washington would fall for this.

The regime is one of the key reasons why radicals were able to flourish post-uprising. It is true that elements within the mainstream rebellion did not push back against the rise of radicals, in part due to short-sighted leadership and Islamist co-optation, but Assad was the one that put many of the radicals back out onto the battlefield after he released numerous radicalized individuals from Sednaya prison in mid-2011.

Ninety percent of those in the prison had been accused of previously fighting in Iraq and key Jabhat al-Nusra, Ahrar al-Sham, and Jaysh al-Islam leaders were part of this “amnesty.” Their subsequent actions were the logical conclusion of a radicalization process that occurred over the previous decade due to the regime's treatment of prisoners. Besides heavily-documented physical torture, the regime mentally and emotionally abused prisoners through burning, urinating, and stepping on the Qur’an. Additionally, the prison was located in a Christian town known for large-scale religious ceremonies and partying. These carefully orchestrated actions created the setting for the incubation of radicalization.

This type of manipulation is nothing new, and the regime helped facilitate and train members of al-Qaeda in Iraq last decade as well as enabled Fatah al-Islam in Lebanon. Once these radicals were freed in 2011, Assad’s military focused on mainly fighting the mainstream rebels while only occasionally targeting the radicals. This is because the regime knew that jihadis would also move against the rebels, indirectly helping the regime. Both were mutually benefiting from one another even if there was no coordination. Because of this, the Assad regime can now claim that he is fighting terrorists as the pool of moderates has shrunk due to the regime and jihadi onslaught.

This policy got more out of control than the regime would have predicted: the consolidation of three provinces (Jabhat al-Nusra in Idlib and ISIS in al-Raqqa and Deir al-Zour) under jihadi control. Even with the assistance of the Iranian Revolutionary Guards, Hezbollah, and others, Assad cannot roll back these groups due to a lack of capacity, illustrating the inability of the regime to have true sovereignty over Syria. And this is without even mentioning that mainstream rebels also control parts of the north and south, Israel’s airstrikes against Hezbollah, coalition airstrikes against Jabhat al-Nusra and ISIS, and Turkey sending tanks into Syria to protect the tomb of Süleyman Şah.

Closer to the regime, the power of the jihadis has grown, demonstrating it is not just a periphery issue. ISIS gained the allegiance of the Rijal al-Haq rebels in Wadi Barada area in Rif Dimashq (Damascus countryside). It has also taken control of Hajr al-Aswad, fifteen minutes from the center of Damascus--about the distance from Silver Spring to downtown Washington, D.C. Additionally, Jabhat al-Nusra conducted a suicide bombing of a bus of alleged Shia pilgrims outside the Citadel of Damascus. Another group, Jaysh al-Islam shelled the core of Damascus. If the regime cannot keep the peace where it is based, how can one expect it to do so in the rest of the country?

Even with help of outside forces, Assad has still been losing territory. His regime is more reliant than ever on Iran and Hezbollah. The Revolutionary Consultative Council released a statement saying that Iran is occupying Syria. This shows that Iran is able to gain hegemony over yet another Arab state and put itself in a better position to challenge its rivals in the Gulf. Iran is already consolidating its grip over Iraq, building up proxies in Bahrain, and obtaining closer relations with the Huthis in Yemen. Iran is de-facto surrounding its nemesis Saudi Arabia, which would potentially lead to more brazen policies on its part that would go against American interests and embolden more radicals.

Iran and its Shia-proxy networks in Syria have caused not only the radicalization of the local population, but is the original reason why so many Sunni foreign fighters began to come to Syria. This pushed many moderates into the hands of radicals. As demonstrated in spring 2013 when Hezbollah announced its presence in Syria, Sunnis will most likely side with radicals over Assad, and even more now that they feel they have fewer options. Since Sunnis perceive that Washington is on the side of the regime and Iran, what is there to lose? Furthermore, special envoy Staffan Domingo de Mistura’s “ceasefire” plan is nothing but surrender as it hands back rebel areas to the regime so that Assad may further slaughter his people as he made it clear that he will keep on “fighting terrorism.” Teaming up with Assad and Iran will not only exacerbate underlying problems, but will make it even more difficult to solve the conflict. It will strengthen groups like ISIS or Jabhat al-Nusra. Assad is no silver bullet.

On a moral level, the regime’s crimes are just as bad as jihadis’. The difference is that they are not bragged about on video or in pictures like ISIS’ crimes. However, torture videos are leaked by the regime to purposely spread fear locally. There is ample evidence of Assad’s crimes against humanity since 2011. Snipers, who were placed on rooftops, were ordered to target childrens’ eyes and heads. Protests broke out in Daraa as a result of detention and torture of fifteen children who wrote freedom chants inspired by events in Egypt on their school walls.  Atef Najib, political secutiy chief of the city and Assad’s cousin, took pleasure in hearing the screams of children tortured during their arrest; their fingernails were pulled out and their bodies and faces were burnt with cigarettes.

According to the Local Coordination Committees (LCC), by June 2011 more than seventy children were killed in demonstrations and under torture. On May 25th 2011, the corpse of Hamza al-Khateeb, a 13 year-old from Daraa, was sent to his family after being tortured to death by electric shock devices; his genitals were cut off, his bones and neck were broken, and cigarette burns covered his body. Ibrahim Qashoush, a poet from Hama who mocked Assad and the Baath Party in his songs and led huge protests, was found dead in July 2011 in the Orontes river with his vocal cords ripped out. In September 2011, Ghiath Matar, a symbol of peaceful resistance who led a campaign that gave roses to soldiers in his town of Daraya, was killed by security forces and his body was also sent to his family with severe torture scars.