The Assault on Tom Brokaw 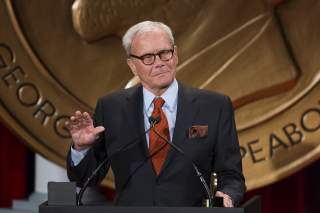 Tom Brokaw found himself in hot water this week after he aired his thoughts on immigration issues on last Sunday’s Meet the Press:

“And a lot of this, we don’t want to talk about. But the fact is, on the Republican side, a lot of people see the rise of an extraordinary, important new constituent in American politics, Hispanics, who will come here, and all be Democrats. Also, I hear, when I push people a little harder, ‘Well, I don’t know whether I want brown grandbabies.’ I mean, that’s also a part of it. It’s the intermarriage that is going on and the cultures that are conflicting with each other. I also happen to believe that the Hispanics should work harder at assimilation. That’s one of the things I’ve been saying for a long time. You know, that they ought not to be just codified in their communities but make sure that all their kids are learning to speak English, and that they feel comfortable in the communities. And that’s going to take outreach on both sides, frankly.”

“The Greatest Generalization,” replied a witty tweet. Others went into overdrive to make sure the viewing public saw Brokaw’s words as not just wrong, but downright deplorable. NBC was quick to distance itself from its longtime Nightly News host, calling Brokaw’s words “inaccurate and inappropriate.”

At least the first portion of Brokaw’s statement wasn’t widely criticized; two-thirds of Hispanics consistently vote Democratic, and it takes an exceptional Republican politician to get close to the 50 percent mark. If demographics are destiny, that means an increasingly large Hispanic population will disproportionately vote Democrat, moving the country in a leftward direction.

What received the most pushback was Brokaw’s opinion that Hispanics needed to worker harder at assimilating towards the wider American culture. “‘Hispanics’ are learning English just fine. The problem is that white people are doing a crappy job of assimilating into the increasing diversity of the country. The problem isn’t Hispanic assimilation. It is white racism,” read part of a tweet from Associate Professor Nelson Flores of the University of Pennsylvania.

Is this really the case?

“What Tom Brokaw said was completely unexceptional and assimilation used to be one of the things that mainstream Hispanic advocacy organizations encouraged and advocated. Apparently no more. It’s a shame the Brokaw subsequently apologized, it was a teachable moment to assert that the only way immigration will strengthen the United States is if it's accompanied by assimilation, which historically has never been an uncomplicated process,” says the conservative writer and author Scott McConnell.

It’s also the case that this whole conversation could not have taken place without the predominant use of the “R” word. As W. James Antle III, editor of The American Conservative, puts it, “The point of immigration is not getting new workers or voters but the making of new Americans. Tom Brokaw's comments were inarticulate and not the way I would have phrased them. But the idea that assimilation is a racial slur is nonsense. It is not exclusive—it is integrationist and inclusive.”

But racism is indeed the charge that’s being flung about. “What Tom Brokaw said last Sunday on @MeetThePress about Hispanic Americans was racist. As with anyone, what matters is not what is in his heart, but what came out of his mouth. What he said met the definition, and I am tired of having to debate facts. Nothing to add,” tweeted senior writer at Rolling Stone Jamil Smith. Black Lives Matter activist DeRay Mckesson added, “Tom Brokaw’s racist statement was pretty clear—it requires no interpretation.” Actually, it does.