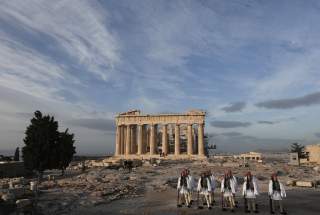 Australian universities have rebuffed Australia’s former Prime Minister Tony Abbott and the Ramsay Centre for Western Civilisation for wanting to endow programs that are actively pro-Western civilization. Yet, America’s top schools and universities have been doing that for one-hundred years.

Universities don’t often turn down money. But the Australian National University recently rejected a multimillion-dollar offer from the Ramsay Centre for Western Civilisation to fund Western Civilization course that would be “not merely about Western civilisation but in favour of it, in the words of Ramsay board member and former Prime Minister Tony Abbott.

It all goes back to World War One. In the first weeks of the war, German troops murdered thousands of Belgian civilians for resisting the German advance. Some of the most infamous German atrocities were committed in the university town of Louvain, which German troops systematically burned to the ground.

In a vain attempt to justify the complete destruction of that town, and its ancient Belgian university, a group of ninety-three German professors signed an open letter to their colleagues in “the civilized world” laying out the case for German militarism. The signatories included fourteen Nobel Prize winners, one-fifth of all those living at the time.

The esteemed professors lamented that in Louvain “our troops with aching hearts were obliged to fire a part of the town as a punishment.” They pleaded that “were it not for German militarism, German civilization would long since have been extirpated.”

Shocked by such unabashed barbarism, American public opinion turned against Germany. When the United States ultimately joined Australia and the Western world in the “war to end all wars,” the U.S. Army commissioned Columbia University to develop a humanities class to teach student officers about the Western civilization they were tasked with saving.

The class, called “War Issues,” was founded on the idea that “an understanding of the worth of the cause for which one is fighting is a powerful weapon.” When the war ended, Columbia made the class a requirement for all students under the title “Introduction to Contemporary Civilization in the West.”

Thus the American educational tradition of “Western Civ” was born.

John Erskine, the pioneer of Columbia’s course in the Western classics, insisted that “students should approach the works directly, not through secondary articles and books about them . . . the classes should be conducted as discussions, not lectures, to ensure that students would be thinking for themselves.”

The idea that students should come to their own conclusions, without scholarly interpretations to guide them, was highly controversial among Erskine’s fellow professors. But the idea caught on. For the last hundred years, most top American schools and universities have offered Western Civilization programs based on direct student engagement with the great books of the world.

The point of these programs is not the “greatness” or “Westernness” of the books. It is the greatness and Westernness of the civilization that reads them. Western Civilization and great books programs are premised on the great Western idea that we are a civilization of people who think for ourselves.

Australia needs more of this. Australian schools and universities are good at teaching students to master the disciplinary expertise of their chosen subject areas—they are less good at tolerating the independence of mind that people develop by thinking for themselves.

Image: Greek Presidential Guards stand in front of the Parthenon temple during the flag hoisting ceremony at the Acropolis hill in Athens November 21, 2013. Known in Greece as Evzones, the Presidential Guards stand still outside parliament even as violent clashes break out between police and protesters, conjuring an image of stoicism in a country struggling to pull itself out of a crisis. The role of the Presidential Guard, which was founded in 1868, is purely ceremonial, but the Evzones are drawn from the Greek army. They wear a traditional uniform, which includes a pair of heavy, red-leather clogs with black tassels, and a white kilt with 400 pleats, one for each year the country was under the Ottoman occupation up to 1821. They are tasked with raising and lowering the Greek flag, on the top of the Acropolis hill. Picture taken November 21, 2013. REUTERS/John Kolesidis