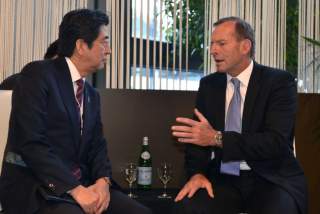 Japan’s premier Shinzo Abe has a reputation for policies and gestures that are offensive to World War II victims, but his recent speech to the Australian parliament was anything but. With his sensitive and gracious handling of the two countries’ troubled past, he showed a promising awareness of how history must be handled in service of his diplomatic agenda in East Asia.

A government’s remembrance of the past is strongly driven by its political agenda in the present. Countries with clashing political goals mobilize their people, economies, and soldiers using divisive memories of past violence. For example, Beijing builds support for military spending and territorial claims with a narrative of China’s “century of humiliation” at the hands of the European great powers, the United States, and Japan. Palestinians in the West Bank showed their hostility toward Israel when they named a square in honor of one of their heroes, Dalal Mughrabi, whom Israelis consider to be a terrorist. (Mughrabi in 1978 led the deadliest attack in Israel’s history, killing 38 Israelis, 13 of them children.)

By contrast, countries that share strategic goals in the present, craft reconciliatory memories of the past. In their holidays, ceremonies, monuments, and statues they highlight shared, rather than divisive, events and themes. They demonstrate empathy for each other's suffering. They show respect for each other's heroes.

Accordingly, in Western Europe after World War II, formerly bitter combatants had to create a narrative that would support European union and NATO partnership. Thus French fear and resentment of the Germans—widespread among its people and politicians—was transformed within the span of a decade. As historian Marc Trachtenberg wrote in his book, A Constructed Peace, to support shared strategic goals, “Political relations would have to be recast and put much more on a basis of equality and mutual respect.”

NATO and European Union partners continue to embrace a narrative of forgiveness, democracy, and shared political goals. At the recent seventieth anniversary of the Normandy landings, President Barack Obama’s speech described Normandy not as a landmark of Germany’s defeat, but as “democracy’s beachhead.” At the fortieth anniversary, French President Jacques Chirac did the same when he spoke of “the winds of freedom blowing across Europe.” He had invited the German chancellor to attend the anniversary that year because, he said, “I wanted Germany to remember with us those hours when the ideal of freedom returned to our continent.” In this narrative, Normandy is not about defeating the German enemy; it is about the rise of democracy. This is a theme that Germans too can celebrate, and one that today bands NATO together in operations against authoritarian governments.

When editorial pages and op-ed writers discuss Japanese leader Shinzo Abe’s handling of history, they generally emphasize his divisiveness. Indeed, Abe has on many occasions outraged Japan’s wartime victims with the ways that he has dealt with the past. His visit to Yasukuni shrine—a shrine to Japan’s war dead that is associated with Japanese emperor-worship, imperialism, and war crimes—alienated and offended neighbors and the United States. Gaffes and insensitive statements about Japan’s past by some of Abe’s appointees further create suspicions that he would prefer to obscure the darker events of Japan’s twentieth-century history.

In particular, Abe is widely criticized for his handling of the memory of the sexual slaves of the Imperial Army. Though Abe has underscored previous admissions of Japan’s guilt, his government announced it was investigating the facts underpinning a landmark 1993 apology, suggesting that it believed the facts untrue. Seoul deserves much blame for the deterioration of the two countries’ relations in recent years, but Abe’s handling of the sex-slave issue—an issue particularly salient among South Koreans—has also fueled discord between the two countries.

In his recent speech in Australia, however, Abe showed that he understands how the past must be handled in order to further important strategic goals. Like the NATO leaders at Normandy, Abe followed the playbook for reconciliation. Abe addressed the topic of Australia and Japan’s wartime history, but framed it in terms of shared suffering. He acknowledged the suffering of Australians and expressed his condolences.

Like Obama at Normandy, Abe focused on the people-to-people level: he recounted a story about a Japanese mother who lost her son and was later invited on a friendship visit to Australia. Abe also recognized and thanked Australians who volunteered in Japan after the 3.11 disasters. He tipped his hat to an Australian hero (Olympic swimmer Dawn Fraser, in attendance) and recognized Australia’s indigenous people and their leaders. Abe’s speech was a respectful, deftly crafted shared narrative of two countries that were once enemies, but now reconciled.

Abe’s speech was adroit in another way: though he did not mention the word “China,” the speech featured a palpable anti-Chinese subtext. Abe spoke of Japan and Australia's shared values of "peace," "democracy,” "human rights," and "rule of law" (attributes that, by implication, China lacks). Abe also implicitly criticized Beijing—which frequently discusses Japan’s wartime atrocities and lambasts Tokyo as impenitent—by emphasizing Australia's generosity and forgiveness toward Japan: its "tolerance," "friendship," and "open-minded spirit.” The speech thus silently condemned China for lacking the noble qualities of Australia, and the same values as the two emergent partners.

As noted, Abe deserves criticism for his clumsy handling of some issues, and many critics will continue to urge him to be more forthright and contrite about Japan’s past. But it is getting harder and harder to paint Abe as a fire-breathing nationalist. The Economist previously commented that “On issues involving Japan’s wartime past, Mr. Abe often seems torn between his nationalist instincts and diplomatic necessity.” However in Australia, those so-called “nationalist instincts” appeared well under control and astutely mobilized in service of his strategic agenda in East Asia.

Jennifer Lind is associate professor of government at Dartmouth College, and the author of Sorry States: Apologies in International Politics (Cornell Univ. Press, 2008). Follow her on Twitter: @profLind