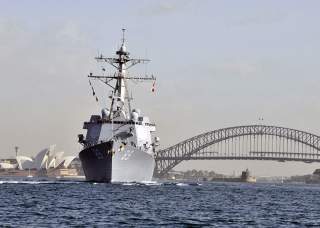 Former Australian prime minister Paul Keating has been criticized for suggesting Australia “cut the tag” regarding the U.S.-Australia alliance. Australia can pursue its strategic interests and reaffirm its resolve to the U.S. alliance without following the United States into another ill-conceived war in the Middle East.

Australia needs to reassess its commitment to the fight against ISIS for two reasons. First, the election of Donald Trump ushers in a new era of transactional global politics. Second, the dynamic rise of Asia means that Australia should prioritize its regional strategic objectives above now dubious alliance commitments in the Middle East.

Is Defeating ISIS a Strategic Objective for Australia?

Australia has historically based its strategic policy off the British Empire’s policy. The Empire’s policy produced one thousand years of impenetrable sea defense. Britain did so by securing its shores and ensuring that no sole power dominated Europe. Australia saw this as a successful model for a strategic defense.

Similarly, Australia has secured its shores and established itself in a region of strong middle powers, such as Indonesia and India. China exhibits great-power status, but the regional balance of power is kept in check by global U.S. dominance.

Australia has no continental threats. It is intimately linked economically, if not strategically, with all its immediate neighbors, and has no direct hostility with any state in its periphery or beyond. Australia’s operations against ISIS as part of Operation Inherent Resolve do not align with its strategic objectives.

But power politics are complex, and unlike the twentieth-century British Empire, Australia relies on alliance assurances to layer its strategic objectives.

Canada has completely withdrawn its military from the fight against ISIS. This has had little to no effect on its alliance with the United States.

Before the Paris Attacks of 2015, Australia was widely considered the second largest military contributor of all coalition forces. This was despite the fact that no major ISIS attack had been carried out on Australian soil.

The U.S. alliance is an indispensable element of Australia’s global security policy. But without the immediate threat of an ISIS attack, and no comparable military commitments from other nations with security assurances from the United States, the status quo cannot be justified as a necessary alliance concession.

The ambiguity surrounding Trump’s transactional foreign policy may be worrisome to some countries, but should it worry Australia? Australia has the chance to cross two T’s with one stroke of the foreign-policy pen.

First, Australia can drawdown its commitment to the Middle East. Second, and most importantly, it can coalesce its U.S. alliance commitment with its strategic objectives.

The Trump administration has made clear its desire to renegotiate and reinvigorate bilateral deals both economically and militarily. So, with the change of U.S. administration, the resolve of Operation Inherent Resolve is looking less inherent, and more quid pro quo for nations historically aligned with the United States.

For Australia, it presents an opportunity to kick the habit of joining far-flung missions that have ill-defined objectives and take place in culturally foreign regions. This allows Australia to reaffirm its resolve to the United States alliance through support of U.S. primacy in Asia. This can be done all whilst Australia simultaneously distances itself from a restive region in the world.

The country’s strategic interest of regional stability and prosperity can be actualized through its U.S. alliance rather than despite that alliance.

If Not ISIS, Where Do Australia’s Strategic Interests Lie?

The future of Australia’s strategic interests lies in the Asia-Pacific region. The dynamic rise of multiple Asian nations will test the waters of U.S. dominance in Asia.

Whilst Australia’s military operations in the Middle East may be consistent with its historic approach to foreign policy, the paradigm of new security threats that Australia face are not comparable to those of the past. Australia’s U.S. alliance won’t be tested in a desert in Mosul, it will be tested in murky international waters.

Australia can kick the habit without cutting the tag. The persistence of U.S. dominance in Asia is crucial to Australia’s broad strategic objectives and maintains stability in the region.

Aidan Parkes is a research associate at the Embassy of Afghanistan and an honours candidate at the Strategic and Defence Studies Centre, Canberra.