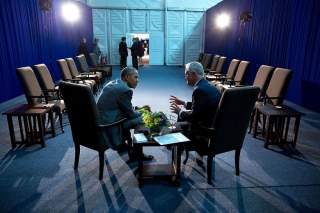 A senior U.S. Army officer recently generated headlines on both sides of the Pacific by highlighting the strategic and economic challenges facing Australia today. Keen to maintain close ties with both their American ally and their chief economic partner in China, Australian officials are today conscious of the potential tensions that lie ahead.

According to Col. Tom Hanson, the time has come for Australians “to make a choice.” The Assistant Chief of Staff at U.S. Army Pacific, Hanson noted that “it’s very difficult to walk this fine line between balancing the alliance with the United States and the economic engagement with China,” adding that “there’s going to have to be a decision as to which one is more of a vital national interest for Australia.”

A Pentagon spokesperson immediately dismissed the comments as personal views and stressed that “the idea that Australia, or any country” needs to choose between the United States and China “presents a false choice.”

Yet the notion that there is a looming “China choice” facing Australia is gathering support among portions of its strategic elite. Some foreign policy leaders hold that, faced with such a dilemma, their country should double down on the U.S. alliance, whatever the economic costs. Others believe that Canberra would do well to be on better terms with Beijing in light of its trade and investment, China’s regional ascendance, and doubts about American staying power in Asia. And still others advocate a more neutral Australian course in the future, neither aligning with China nor signing up for every American effort to resist Beijing’s assertiveness.

The reality is more complex. An all-or-nothing China choice would damage both Australian and American interests, and in Canberra such a dilemma should be viewed as a policy failure rather than the inevitable outcome of economics and geopolitical competition. Rather than single, stark option, Australia will instead face a series of “China choices” on discrete issues that require Canberra to balance its economic and security risk. And therein lie the challenges.

Australia’s close and growing commercial ties with China have fueled its domestic economy but created worrying asymmetric vulnerabilities. A third of Australian exports now go to China, a higher percentage than any other G20 country, and China buys more than half of its exported iron ore. Chinese investment in Australia is on the rise and the government recently rejected, on national security grounds, a Chinese bid for a major electricity grid in New South Wales. Nearly 50,000 Chinese students started courses in Australian universities and schools over the past year, boosting the country’s “education export” industry. China is the largest buyer of Australian government debt and a million Chinese tourists visited Australia in 2015.

Foreign Minister Julie Bishop points out that never before has Australia’s chief ally and top economic partner existed in a highly competitive relationship. Complicating matters significantly is Beijing’s habit of employing economic tools to punish perceived foreign policy transgressions. In the past several years, for instance, China stopped exports to Japan of rare earth materials during the Senkakus crisis, banned the import of Philippine bananas around the time of the Scarborough Shoal flare-up, and promised trade and commercial benefits to Seoul if rejected Washington’s proposed deployment of theatre missile defenses.

The result, however, is not Australia’s forced selection between a binary outcome in Asia: a continuing alliance with an America that may or may not maintain regional primacy, or continued good economic ties with a China that aspires to regional dominance. Such an overarching strategic choice is not one that even the United States would make. Washington too has a complex relationship with Beijing that mixes areas of cooperation, such as trade and investment, climate change, and Iranian nuclear diplomacy, with issues of fierce competition, such as in the East and South China Seas and in the cyber domain.

The Australian aim, as is the American objective, should be not to choose or to contain but to hedge and balance. In that sense, economic dependency on China enhances rather than diminishes the rationale for a closer security relationship with the United States and others. A neutral, quiescent, or China-leaning Australia would undermine both the regional balance and the conditions necessary to ensure Australian foreign policy independence, while a stronger and more regionally connected Australia reduces the risk associated with its Chinese economic ties.

Yet it is also untrue that Australia can avoid choosing at all. The likely scenario is that Australia will face many, relatively modest choices about how to balance its economic dependence on China, its alliance with the United States, and its desire to bolster the regional rules that Beijing increasingly transgresses.

The first of these challenges may be close at hand. Australia’s view on Chinese behavior in the South China Sea has been clear across multiple governments. Officials routinely urge all claimants to resolve their disputes peacefully, and note that Australia will continue to exercise its rights to freedom of navigation and surveillance overflights. It followed naturally when Canberra called on China to respect the recent Permanent Court of Arbitration’s judgment on the South China Sea.

Yet after it did so, a Chinese foreign policy spokesman pronounced his government “shocked” by Australia’s “wrong remarks.” China’s notoriously jingoistic Global Times went further, calling Australia a “paper cat” and warning that if it “steps into the South China Sea waters, it will be an ideal target for China to warn and strike.”

The exchange has thus far generated little more than rhetorical heat, but it represents the kind of difficult trade off that Australia may well face in the future. It might, for example, wish to conduct freedom of navigation exercises in the South China Sea, as Washington would like, but risk Chinese economic retaliation if it does so. It might seek to fly through any air defense identification zone established by Beijing in the South China Sea; China has already protested even existing Australian P-3 surveillance flights out of Malaysia.

A second kind of challenge could arise amid a significant disagreement between the United States and Australia over China. Already, Washington has expressed displeasure with the decision to grant a 99-year lease for the port of Darwin, located near the deployment of U.S. Marines, to a Chinese firm. Similarly, Australia and the United States found themselves on opposite sides of the debate over whether to join the China-led Asian Infrastructure Development Bank. None of these differences amounted to much, but disagreement on a more important matter – for example, whether to impose economic sanctions on China over its South China Sea activities or its cyberattacks and intellectual property theft – could produce a cleavage.

A third set of challenges could result from Canberra and Washington’s shared enthusiasm for giving ever-greater concrete meaning to the alliance. Australia might, for instance, one day express openness to the Pentagon’s interest in rotating new bombers and tankers through Australian air bases – already, nuclear-capable B-2s and B-52s take off from Australian airfields. China has warned Australia against new deployments, and it is conceivable that Beijing could object even to the continued rotation of existing bombers.

In any of these scenarios, Australian policymakers would undoubtedly weigh the potential economic punishment that might result from appearing to side against China or with the United States; indeed, it would be irresponsible not to take such matters into consideration. And in a vibrant democracy like Australia’s, it would be natural for some domestic business leaders to press on Canberra a policy of distancing itself from the United States in order to preserve good commercial ties with China.

The task before Australia and the United States today is neither to make an all-or-nothing China choice nor to deny that choices of any kind lie ahead. Instead, they should focus on mitigating the risks that such dilemmas pose to an alliance that has done so much good over the decades.

There are a number of starting points. Washington and Canberra should endeavor to prevent the kind of flare-ups with China that would force such choices in the first place, by broadening the application of existing rules for handling potentially dangerous incidents at sea. They should remind the Australian public and business sector of non-Chinese commerce to the economy; the country’s top foreign investor, for example, is not China but the United States. Australia should couple a better understanding of its specific economic vulnerabilities with an honest conversation about how much risk its leaders are willing to assume in order to help push back against unwanted Chinese actions.

Above all, policymakers and business leaders should understand that Australia does not, in fact, face a singular and nearly existential choice between security and prosperity. The country’s leaders have a task that is at once less consequential but more difficult: to make many choices, on many issues—and for years to come.

Richard Fontaine is president of the Center for a New American Security and recently served as the inaugural Alliance 21 Fellow at the University of Sydney’s US Studies Centre. You can follow him on Twitter: @RHFontaine.