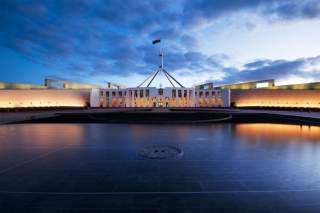 The ghostly appearance of a former king inspired the famous line from Shakespeare’s Hamlet, “There is something rotten in the state of Denmark.” With five leaders in just five years, something appears decidedly rotten about the state of affairs in Australia, after the reappearance of former Liberal leader Malcolm Turnbull as the nation’s new prime minister.

Yet with opinion polls published after the bloodless coup quickly turning in the ruling party’s favor, Turnbull’s elevation has sparked optimism of a change in direction for the world’s twelfth-largest economy, which has struggled to adjust to the end of a China-driven mining boom.

On the evening of September 14, sixty-year-old Turnbull overthrew his younger rival, fifty-seven-year-old Tony Abbott, securing the leadership by 54 to 44 votes in a meeting of Liberal Party lawmakers. Under Australia’s Westminster system, the leader of the ruling party can become prime minister even without a national election, a fact noted by Abbott when he said before the vote that the leadership should be “earned by a vote of the Australian people.”

Ironically, Abbott had challenged and beaten Turnbull by a single vote in a party room poll for leadership of the center-right party in 2009, with Abbott narrowly failing in 2010 but later delivering his party a landslide election victory in 2013.

But with the Australian economy slowing, the jobless rate rising and business confidence sinking, Turnbull convinced his colleagues of looming defeat in next year’s scheduled poll, should they stick with the unpopular Abbott.

“If we continue with Mr Abbott as prime minister, it is clear enough what will happen. He will cease to be prime minister and he’ll be succeeded by [Labor Party leader Bill] Shorten,” he said. Turnbull pointed to Abbott’s inability to provide economic leadership, his controversial “captain’s picks” such as awarding a knighthood to Britain’s Prince Philip, and the Coalition Liberal-National party government’s track record of losing “30 Newspolls in a row” to the center-left Labor.

Despite Turnbull’s liberal leanings, including his previous support for an Australian republic, gay marriage and an emissions trading scheme, the new leader has pledged to build consensus for reform while steering the conservative party in a more centrist direction.

“This will be a thoroughly Liberal government committed to freedom, the individual and the market. It will be focused on ensuring that in the years ahead, as the world becomes more and more competitive and greater opportunities arise, we are able to take advantage of that,” he said in his postelection victory speech.

"My firm belief is that to be a successful leader in 2015, perhaps at any time, you have to be able to bring people with you by respecting their intelligence in the manner you explain things….[New Zealand Prime Minister] John Key for example, has been able to achieve very significant economic reforms in New Zealand by doing just that."

Economists said the new leader would revive consumer and business confidence, even though reforms could take longer to materialize.

“Turnbull’s past statements and his more liberal approach suggest he will have some policy differences to Abbott, although we do not expect a significant shift of policy in the short term,” ANZ Research said. The Australian bank said policy papers currently being drafted on taxation and federal-state relations could form the basis of Turnbull’s reform efforts, giving the potential for a boost to productivity growth.

With an estimated wealth approaching A$200 million, Turnbull ranks as the nation’s second-richest lawmaker behind independent lawmaker Clive Palmer. Yet unlike Palmer’s resource riches, Turnbull earned his wealth from successful investments in internet and media businesses—a technology switch that the “Lucky Country” would dearly love to replicate in current circumstances.

Prior to his elevation, Turnbull served as communications minister, where he wrestled with reforming the previous government’s multibillion dollar National Broadband Network (NBN), along with the money-losing postal service, Australia Post. Media policy also came under scrutiny, although Turnbull failed to gain consensus on proposed changes to media laws that divided some of the nation’s wealthiest businesspeople.

The technology, media and renewable energy sectors are expected to benefit from Turnbull’s focus on innovation, with commentators stressing his mandate to reform amid sluggish economic growth.

According to Credit Suisse analyst Hasan Tevfik, Abbott’s downfall began with its 2014 budget, “which was regressive and austere at a time when Australia needed fiscal expansion to bolster growth,” the Australian Financial Review reported. The investment bank suggests “counter-cyclical” policy, such as increased government spending, is urgently needed to prevent the “Lucky Country” from snapping its twenty-five-year economic winning streak and falling into recession.

“The sudden elevation of Malcolm Turnbull to prime minister could provide a much needed boost to both business and consumer confidence in the months ahead—if he is successful in outlining a more positive economic ‘narrative’ as promised,” BetaShares chief economist David Bassanese said.

“The China-Australia Free Trade Agreement will open the door to the largest economy in the world offering thousands upon thousands of jobs in every industry. Labor and the unions think they can frighten people about the free trade agreement. If they succeed they will only frighten people into poverty,” Turnbull said.

Abbott’s gaffe-prone treasurer, Joe Hockey, failed to deliver a clear message on fiscal reform and will likely be replaced by Social Services Minister Scott Morrison, a conservative whose backing was considered essential to Turnbull’s leadership coup.

However, the new leader’s vaunted communication skills will be sorely tested by an obstructionist upper house of parliament, which blocked major spending cuts proposed by Hockey.

In foreign policy, Deputy Prime Minister Julie Bishop has retained the post of foreign minister after backing Turnbull’s putsch. While Australia cemented its U.S. alliance during Abbott’s tenure and drew closer to Japan, which Abbott described as a “new special relationship,” Turnbull’s personal ties with China have sparked speculation of a greater focus on Beijing.

Turnbull’s son Alex resides in Singapore and is married to Yvonne Wang, the daughter of a former Chinese government-linked academic and Communist Party member. Turnbull has also had previous business interests in China, including establishing a joint venture mining business in 1994, while his comments concerning the Second World War have been welcomed by Beijing.

Following Abbott’s praise for the fighting qualities of Japanese soldiers, Turnbull reportedly told an Australia-China function: “We should never forget that China’s war against Japan was not just their war, but our war too and without China we may not have won it at all.”

In a 2011 speech to the London School of Economics, Turnbull said it made “no sense for America, or its allies, to base long-term strategic policy on the contentious proposition that we are on an inevitable collision course with a militarily aggressive China.”

Nevertheless, according to the Australian Financial Review’s China correspondent, Lisa Murray, Turnbull “is not expected to be an apologist for China. He has called on Beijing to be more transparent about its aims in the region and he is unlikely to roll over on human rights issues and the rule of law, both important small ‘l’ liberal values.”

Turnbull now faces the politically contentious decision of awarding the nation’s multibillion dollar submarine contract to French, German or Japanese bidders. While Abbott and his defense ministers have previously praised Japan’s Soryu submarines and the potential for increased defense cooperation, South Australian lawmakers have campaigned strongly for the subs to be built in their state, giving a potential edge to the Europeans who have promised more local jobs.

After the rock-solid support of Abbott for the U.S. alliance and its key Asian ally of Japan, Turnbull may favor a more conciliatory path toward resolving U.S.-China tensions and Beijing’s growing military presence in the South China Sea.

However, Washington would ultimately benefit from an economically stronger ally, regardless of Turnbull’s China policy. Should Turnbull deliver on his promised reforms, Australia could be set for a longer spell of economic sunshine than previously considered possible.