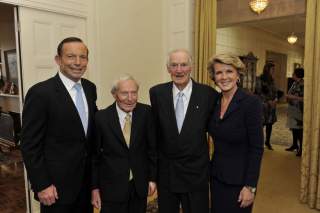 Earlier this week, Australian Prime Minister Tony Abbott beat back a vote to decapitate the center-right Liberal Party of his leadership. The question now is how many more antagonists can he fend off.

There’s Australia’s Labor Party, once moribund after two chaotic prime ministerships, is now surging in popularity. Its only question is whether they should strike Abbott now or let him limp into the next election. There’s Malcolm Turnbull, the environmentalist communications minister who was considered the most likely replacement for Abbott, and is now said to be biding his time, backed by a bloc of moderate Liberals distrustful of their PM’s conservatism. There’s Julie Bishop, the enigmatic Liberal foreign minister, who is officially standing shoulder-to-shoulder with Abbott, but whose support of his leadership is tepid to say the least.

If all this calls to mind a certain HBO show minus the full-frontal nudity, Abbott has a denial ready. He recently promised that his government would never degenerate into a “Game of Thrones circus, which the Labor Party gave us.” But it’s hard to watch the power struggles without thinking that, as Australian memes and T-shirts cheekily responded, “winter is coming” for Abbott. A recent News Corp poll found mammoth margins of voters preferring both Bishop and Turnbull to Abbott, and the prime minister’s approval rating bottoming out at 24 percent. Abbott has often been called an Australian George W. Bush; now the comparison is complete.

And while Abbott did indeed “kill the spill”—Down Under dialect for a party leader not getting canned—his popularity problems began long before any serious chatter of mutiny. His Liberal Party was elected by a landslide margin in 2013 in a sharp rebuke of the Labor Party. From there the Liberals easily formed a coalition with several smaller right-leaning parties and Abbott became the first Liberal prime minister since John Howard.

Early on there were tremors of scandal in Abbott’s government, including two frontbenchers embroiled in a travel expense flap and alleged corruption by his assistant treasurer. But it was ultimately policy that nosedived Abbott’s numbers, specifically a fuel tax increase and a winnowed budget that slashed health and education line items, both pushed in spite of a campaign pledge not to raise taxes or cut many types of spending. A poll taken only eight months into Abbott’s prime ministership found that 48 percent of voters opposed the budget and 56 percent supported Labor over the Liberals, a dramatic turnaround.

Tension reportedly began to build within the Cabinet and intensified when the coalition lost an off-year election in Victoria. It finally bubbled over when Abbott made the baffling decision to award Prince Philip, the Duke of Edinburgh and husband of British Queen Elizabeth II, a knighthood. It was Abbott who had resurrected Australian knighthoods after they’d been abolished nearly thirty years earlier. But the decision to honor Philip, whose authority many Australian republicans disputed in the first place, sent the Cabinet into a panic. Ministers complained that they hadn’t been consulted. “There is an old saying that when you are in a hole, you should stop digging,” one said. “Well, we’ve just punched through the earth’s crust.”

Another off-year election loss, this one in Queensland, furthered Abbott’s subterranean trajectory and made a leadership challenge inevitable. He passed that test, of course, but even greater challenges lie ahead. As Paula Matthewson wrote at the ABC: “Now there is blood in the water, an off-the-radar battle is taking place between the right-wing conservatives who want to protect the Government’s current agenda and the moderates who seek to change it.” Abbott must either play peacemaker or quietly squash the moderate rebellion, without making any sudden movements that catch the eye of the Australian electorate. It’s an unenviable position, to say the least.

All of this is distressing to many of us across the Pacific pond saw Abbott as the great conservative hope of the Five Eyes. Britain might have had a blow-dried, carbon-neutral, compassionate conservative in David Cameron, but Australia had the real deal, a traditionalist so nourished on red meat that he once threatened to “shirtfront” Vladimir Putin (look it up, and use the Macquarie Dictionary). “Tony Abbott is the real thing like no one since Margaret Thatcher,” trumpeted the American Spectator in 2013.

So what happened? One potential culprit, fingered by the Council on Foreign Relations Senior Fellow Joshua Kurlantzick, is incompetence. “Abbott has proven so incapable of clear policy thinking, so unwilling to consult with even his own ministers and advisers, and so poor at communicating that he has to go,” Kurlantzick writes.

Certainly Abbott has tripped over his shoelaces a number of times and has been criticized for his top-heavy leadership style. But slagging him off as incompetent glosses over his record of genuine policy success. He struck free trade deals with Japan and South Korea, which are expected to ease prices on everything from beef to electronics. He repealed Australia’s mining tax and carbon tax, fulfilling two of his key election promises. (Too-cute-by-half proponents of an American carbon tax take note: shortly before it was repealed Australians supported axing their carbon tax 53 percent to 35 percent.)

Abbott is no moron. More likely, this is old-fashioned, first-term overreach by a politician who likes to grin at himself in the mirror, the sort that usually balances out as governance becomes more of a slog. Still, it’s rare that you see a first-world leader’s popularity plummet so quickly. Earlier this week, Julie Bishop popped up and said the prime minister needed to address party concerns over his insular chief of staff, Peta Credlin. The foreign minister is flexing her muscles, and others will too if the Liberals’ grip on power becomes any more precarious. Abbott’s days of unilaterally commanding his ministers are over.

Can Abbott survive? For now, yes. But his woes should send a message to conservative candidates here in America: fiscal conservatism, though necessary, isn’t always as popular as we’d like—and the best ideas in the world won’t matter if you can’t govern effectively.

Matt Purple is an assistant editor at Rare Politics.