Authorization for Use of Military Forever 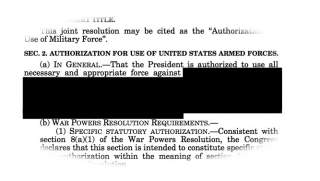 Last month, when the United States began conducting limited air strikes against the Islamic State in Iraq and the Levant (ISIL), with the stated goals of preventing a humanitarian disaster and protecting U.S. personnel abroad, the legal basis for those actions was the president’s Article II powers as commander in chief. But the question of what the legal basis would be if Washington chose to launch a broader campaign against ISIL remained unanswered—until last night. Around the same time that President Obama gave his speech laying out his approach toward fighting ISIL, an unnamed administration official stated that the operations to come would rely on the 2001 Authorization for Use of Military Force (AUMF), passed immediately after September 11. He explained the rationale for this as follows:

The 2001 AUMF authorizes the use of “all necessary and appropriate force against those nations, organizations, or persons” responsible for 9/11 and those who “harbored such organizations or persons.”  The Administration has interpreted the 2001 AUMF to authorize the use of force against AQ, the Taliban, and associated forces.  Based on ISIL’s longstanding relationship with al-Qa’ida (AQ) and Usama bin Laden; its long history of conducting, and continued desire to conduct, attacks against U.S. persons and interests, the extensive history of U.S. combat operations against ISIL dating back to the time the group first affiliated with AQ in 2004; and ISIL’s position – supported by some individual members and factions of AQ-aligned groups – that it is the true inheritor of Usama bin Laden’s legacy, the President may rely on the 2001 AUMF as statutory authority for the use of force against ISIL, notwithstanding the recent public split between AQ’s senior leadership and ISIL.

This is . . . highly dubious. Critical reactions from experts in national-security law flew in fast. At Lawfare, Benjamin Wittes dubbed this reading “extremely implausible,” Wells Bennett called it “quite a stretch,” and Robert Chesney said he was “astonished” to hear it. At Just Security, Jennifer Daskal said that it represented “a colossal failure of our democratic process.” The official quoted above mentions but glosses over the main difficulty with applying the 2001 AUMF to ISIL, which is the well-publicized split that took place between Al Qaeda’s leadership and ISIL earlier this year. The administration has been clear, in its previous public explanations of what constitutes an “associated force,” that it is not simply “any terrorist group in the world that merely embraces the al Qaeda ideology.” The group in question must actually “be aligned with al Qaeda,” as then Pentagon general counsel Jeh Johnson put it in 2012. ISIL, at this stage, does not meet that criterion. Interpreting the AUMF to cover it now would seem to redefine “associated forces” to mean “anyone who was ever once an associated force.”

This episode encapsulates nearly all of the problems with the current state of the 2001 AUMF. I described a number of them in more detail in our most recent print issue of The National Interest, but three in particular are worth highlighting here. The first is the incredible elasticity of the legislation. Critics of the AUMF have often alleged that it has become the basis for using force in situations far removed from those that its authors envisioned in September 2001. In using that law now to combat ISIL in Iraq and Syria, the White House is providing yet more evidence that those critics are correct.

Second, this sort of far-reaching interpretation of the AUMF serves to further weaken the already-weak role of Congress in issues of war and peace. It represents a clear ploy to circumvent the current Congress and avoid having to go back to it for a new authorization. Congress, for its part, has been completely acquiescent in this trend. With a few rare exceptions—such as Senator Tim Kaine, who insisted that Obama did not have the existing authority to conduct this mission and that Congress get a chance to vote on it—members of Congress appeared perfectly content to avoid a difficult vote in the lead-up to the November midterm elections. As long as this dynamic continues, Congress will only continue to become less and less relevant to the process of deciding when and where America uses military force.

Third, there is the extreme degree of secrecy that continues to surround the AUMF. If there is a single piece of information that describes the absurdity of the situation that we are in now concerning the AUMF, it is this: the fact that the list of “associated forces” that the U.S. government believes itself to be at war with is classified. It should not have been a surprise to interested observers when it was announced yesterday that the executive branch believed that ISIL was covered under the AUMF and would therefore use the law as the basis for a military offensive against it. That should have been public knowledge long ago. And last night, we saw some of the consequences of this secrecy. As the reactions of Wittes, Bennett, Chesney and Daskal above indicate, the government’s reasoning is highly questionable at best. But because the list has been classified, there has been no opportunity for informed public debate regarding who is on the list and who really ought to belong on it.

In one week, the AUMF will be thirteen years old. According to some Pentagon planners, the campaign that they envision against ISIL may last at least three years. Obama famously pledged in May 2013 to work with “Congress and the American people in efforts to refine, and ultimately repeal, the AUMF’s mandate.” Since then, however, it is hard to think of a single tangible step that the Obama administration has taken toward that end. The project of AUMF reform is still very much a worthwhile one. If the White House and Congress aren’t interested in pursuing it, however, they may as well instead just choose to rename the law to reflect what it is rapidly becoming: an Authorization for Use of Military Forever.