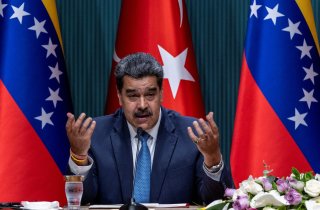 The COP27 climate conference drew to a close this week on much the same lines as the previous meeting: calling on the world’s richest polluting nations to cover the costs of climate change being borne by poor nations, a concept known as “loss and damage.” These discussions are certainly important considering the scale of the threat posed by climate change. Yet in their zeal to clinch headline-grabbing deals with major powers like China, climate change envoys often ignore the woeful record of autocratic governments on environmental issues. This history does not bode well for a climate strategy grounded on securing the cooperation of these governments.

The fact this year’s conference was hosted by the repressive Egyptian dictator Abdel Fattah el-Sisi is an unfortunate reminder of the way in which these assemblies provide a public forum for autocrats to launder their reputations while presiding over some of the world’s greatest environmental abuses. Latin America’s autocrats are particularly adept at this game too. Venezuela’s Nicolas Maduro never misses the chance to use events like COP27 to blame capitalist democracies for the scourge of climate change, conveniently omitting his own country’s record as one of the world’s largest producers of fossil fuels. A recent United Nations (UN) report showed that Maduro’s regime may have committed crimes against humanity associated with strip mining projects in the arco minero (mining arc), making the Maduro regime perhaps the region’s worst abuser of the environment as well as human rights.

In Nicaragua, Maduro’s ally Daniel Ortega has also been abysmal on these issues. In April 2018, students gathered peacefully to demand action to control wildfires in the Indio Maíz Biological Reserve. Instead of taking action to protect the reserve—one of the largest and most important for Nicaragua and the region—Ortega sent police and para-police thugs to break up the protests and failed to address any of the issues raised.

Bolivia’s democratically elected but authoritarian government has overseen one of the highest deforestation rates globally. Forest fires, illegal mining, and land grabbing in eastern indigenous territories have taken place unabated under several governments, Left and Right. The current government, like the previous Movement toward Socialism (MAS) government of Evo Morales, promoted extractive activities with little regard for their environmental impact while suppressing information on the damage this has caused and persecuting NGOs and activists.

Similarly, Mexican president Andres Manuel Lopez Obrador (also known as AMLO) has consistently attacked environmental activists and journalists. Meanwhile, his administration has bulldozed domestic criticisms of the Maya Train, a massive infrastructure project in the Yucatán peninsula, and shown little regard for environmental impact studies and objections from local indigenous communities on the project’s impact on the region’s fragile ecosystem. Environmental watchdog group Global Witness rated Mexico as the most dangerous country in the world for environmental activists in 2021.

Of course, environmental issues are not just a problem for left-wing governments or autocrats. Jair Bolsonaro presided over an unprecedented assault on forests in the Brazilian Amazon; Ecuador’s Guillermo Lasso has earned the opprobrium of indigenous communities threatened by the expansion of extractives industries; and Colombia remains one of the most dangerous countries for environmental activists. The key difference is that all three countries have undergone a democratic course correction. One of the reasons Bolsonaro was voted out of power was his handling of the environment; the Lasso administration is in talks with indigenous communities; and in Colombia, Gustavo Petro won a historic election campaigning on a platform with a heavy emphasis on environmental issues.

It all comes down to incentive structures. Without the accountability inherent to representative democracy, why undertake the difficult and costly work of addressing environmental issues? Without the rule of law, who will stop kleptocratic governments and their cronies from doing as they like to the environment without regard for the consequences? And without independent journalists and civil society to expose these crimes, how will the perpetrators ever be exposed?

COP27 provided an important forum for building consensus around concrete measures to reduce and mitigate the effects of climate change. Yet to achieve any lasting progress on this issue, the connection between democratic governance and environmental stewardship must be acknowledged and incorporated into climate change strategies.

Beyond elections, this means strengthening strong democratic institutions, including an independent judiciary, robust civil society, vibrant and free press, and political checks and balances needed to hold governments accountable. The Biden administration’s plans to engage a cross-section of society in initiatives tackling climate change are a step in the right direction but there is much work to be done to ensure that democratic governance is fully embedded into our understanding of what a long-term sustainable approach to this problem should look like.

Casey Cagley is the resident program director for Colombia at the International Republican Institute.