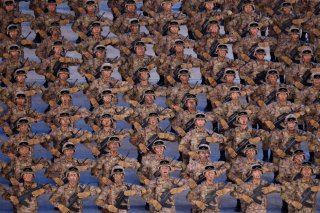 Shortly after its victory over the Axis Powers in World War II, the United States found itself rapidly shifting gears and adapting new strategies to confront fundamentally different challenges in the postwar threat environment. Likewise today, after decades of focusing on reducing and dismantling terrorist networks around the world, senior American defense leaders have recently directed the U.S. military to adopt a “laser-like” focus on confronting a new and fundamentally different threat: China. On the heels of over thirty years of sustained and unrivaled economic growth and newly armed with an assertive foreign policy reflecting a concomitant military and economic confidence, China poses a unique challenge to American power that will likely define great power relations in the twenty-first century. Given these stakes, effective American responses to Chinese challenges require a vivid understanding of both China’s approach to competition as well as the traditional and enduring American strengths that should be brought to bear in competitive strategies. For the United States, successful competition requires a commitment to the classically successful American “counterpunch”; namely, the ability to decisively adapt and respond when threatened. Such an approach reflects the inherent and traditional strengths of American institutions but, in the modern context, now requires American leaders to rediscover the advantages of emphasizing “power protection”—versus “power projection”—in great power competition.

Analysis of China’s long-term strategy for dominance—specifically against the West—reveals important aspects of the Chinese approach to competition that should inform the U.S. framework for countering (and punching) Chinese objectives aimed at degrading U.S. power and influence. In a celebrated Chinese manual describing the nature of emerging competition, Chinese military leaders identify a paradox from Cold War-era competition in which the drive to continually sustain the costs of a power projection arms race end up incurring unsustainable economic costs that ultimately bring down great powers. In their analysis, the former Soviet Union serves as the example par excellence of this destructive paradox. While the decisive and contributing causes for the Soviet Union’s collapse in the Cold War are both many and debatable, the important aspect here is not whether or not the paradox is true but that the Chinese apparently believe it is true and believe that they hold decisive economic advantages over the West to bring its consequences to fruition. To that end, they have formally adopted such an approach into their competitive strategy against the West. Legacy evidence from the Cold War and contemporary evidence from economics suggest both Chinese assumptions regarding the paradox may be valid in emerging competition. Accordingly, U.S. competitive strategies need to be cautious and wary of playing into China’s hands by initiating and attempting to sustain costly arms races featuring power projection weapons and capabilities.

Rather than falling into the power projection arms race “trap“ that China desires, U.S. competitive strategies addressing China should adopt a framework based on “counter-punching.” As its name suggests, the counterpunch incorporates both defensive (“counter”) and offensive (“punch”) elements. Additionally, it is an adaptive maneuver that requires disciplined understanding and controlled strength that, effectively employed, offers better alternatives towards protecting and preserving U.S. power in the face of challenges from China. The defensive element of an American counterpunch towards China involves adopting military restraint and a revamped examination of deterrence. Classic deterrence strategy involves presenting the credible threat of force to adversaries to create undesirable risks for would-be aggressors. The key to deterrence, as Kenneth Waltz famously argued, is determining how much deterrence is “enough” to dissuade aggressors. That is, deterrence does not necessarily require the presentation of power projection assets capable of completely destroying an adversary, but only enough assets to make the risks of aggressive behavior not worth the projected losses involved. Seen in this light, a strategy that diligently examines how much deterrence is “enough” potentially eliminates the impulse to sustain the ever-increasing stakes in costly arms races while, critically, offering a chance to reinvest excess “deterrence” resources into areas that will preserve and protect U.S. power.

The national resources freed up by foregoing an arms race with China represent the potent offensive element of the counterpunch. These resources can be reinvested in other areas such as the private sector which, besides being the hallmark of American prosperity and thus the critical reason for protecting American power in the first place, has historically played a decisive role in the United States’ successful war efforts. Buoyed by a strong and vibrant private sector where the United States remains a desirable global hub for innovation and technology, the needed capabilities for war (or intense competition) can be adaptively produced and rapidly called forward to tip the competitive (or combative) scales towards victory when required. Of course, the “punch” loses its effectiveness without clearly articulated triggers for employment. If China seeks to induce the United States into an uncontrolled arms race, then the current U.S. obsession with China—which seems to interpret every Chinese action in any sphere as a threat requiring a U.S. response—must be viewed as very encouraging in Beijing. An effective U.S. counterpunch requires clearly defined red lines that regulate and set behavior expectations between great powers and indicate when a Chinese competitive action warrants a U.S. response.

Detractors of the counterpunch framework will immediately note the call for military restraint and interpret it as a reactive recipe for military weakness at precisely a time requiring proactive military strength. But military restraint does not imply weakness any more than eating fewer calories implies malnutrition. It simply means making smarter decisions that play to U.S. strengths and away from Chinese strategy. It also entails properly viewing the risks inherent in competition with China. The counterpunch skeptic incorrectly perceives greater risks in short-term military restraint (traded for economic investment and fortification) than in long-term arms races (traded for potential economic collapse). The counterpunch skeptic also fails to appreciate the United States’ historic strengths in adopting this approach. In fact, America has demonstrated exceptional skill as an adaptive counter-puncher—reacting and adapting to adversity and setbacks to rise above them and create positive effects preserving U.S. power and ideas. U.S. institutions have counter-punched their way to success in the political (from the failed Articles of Confederation to the Constitution), social (from abhorrent slavery to civil rights), and military (from disastrous Pearl Harbor to WWII victory) arenas to produce the stable and prosperous nation that exists today.

As John Mearsheimer points out, China has the population size and economic capacity (the “sinew of power”) to pose unique and unprecedented challenges to U.S. power. Additionally, wasteful military exploits—often employed as a means of competing with rivals—have contributed to bringing down world powers again and again throughout history. China understands this apparent axiom and has woven its truth into its competitive strategy to displace the United States as the world’s preeminent power in the twenty-first century. U.S. competitive strategy against China must, therefore, resist the powerful (but seemingly prudent) urge to continually increase the stakes projecting power against China. Rather, the United States needs to adopt a disciplined counterpunch framework focused on protecting and preserving (not projecting) power. This framework leverages the elements of a successful counterpunch: it demonstrates a superior understanding of adversary strategy (China’s desire to economically exhaust the United States with power projection), it leverages smart defensive elements (adopting only “enough” deterrence to influence China’s actions), and it fortifies conditions of economic strength to ensure offensive actions can be brought to bear when required in competition or conflict (re-investing resources into a globally-leading private sector). Employing a counterpunch framework asks Americans to trust its institutions—which is a difficult task in the face of a rising China. But the ask is not for blind trust. As a country with less than one-sixth of the world’s population, the United States as a superpower has been punching above its weight for decades and has historically counter-punched successfully to muster adaptive and superlative responses whenever challenged with adversity. America must follow these historical impulses to remain a superpower in the twenty-first century.

Scott J. Harr is an Army Special Forces Officer and Ph.D. Candidate at the Helms School of Government, Liberty University. He holds an undergraduate degree in Arabic Language Studies from West Point and a Master’s degree in Middle Eastern Affairs from Liberty University. A trained Arabic and Farsi speaker with over four years of cumulative deployment time in the Middle East, his work has been featured in The Diplomat, RealClearDefense, The Strategy Bridge, Modern War Institute, Military Review, The National Interest, and Joint Force Quarterly among other national security-focused venues. The opinions here are solely those of the author and do not represent those of any official U.S. government organization or entity.