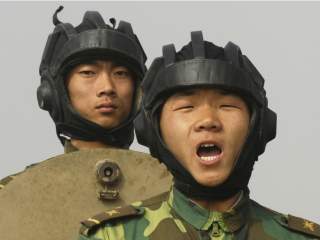 I want to thank Harry Kazianis for taking the time to rebut my recent article in which I argued that, in order to avoid a clash with a rising China the United States should abandon its strategy of primacy in the Asia Pacific. Containment of China is a costly and risky strategy, I claimed, and one that is not necessary to secure America’s vital national interests. Crucially though, the core of my argument came down to this: the prospect for such apparently belligerent policies to successfully dampen China’s regional ambitions is very dim. That Beijing will grow more assertive in response seems more likely.

Kazianis decided not to address the essential core of my argument in his rebuttal. He says that China is the real troublemaker in the region, not us. China has provocatively expanded its military budget and has acted out on its overly expansive maritime and territorial claims in the East and South China Seas, which its neighbors dispute. Our allies in Japan, South Korea, Taiwan and the Philippines, he argues, quoting a Taiwanese official, “want more America, not less” because “Washington is the only thing that ensures China’s rise is not Asia’s nightmare.” Finally, he claims that Americans have an obligation to maintain our predominant military position in the region for the sake of “the international order in Asia.”

Citing government officials in East Asia who argue for “more America, not less” is hardly an argument in favor of continuing our current strategy. It’s not difficult to understand why that is their view—after all, we carry the burden for their security. Few states would reject “mutual” defense guarantees and massive subsidization of their military power by a distant country when the alternative is doing all that hard work themselves. Moreover, it’s difficult to put too much stock in their hysteria about China’s nefarious rise when it’s supposedly vulnerable and terrified neighbors are reluctant to spend more than 1-2 percent of their GDP on defense. As long as Americans continue to underwrite the defense of China’s rivals, they will continue to free-ride on our offerings. Meanwhile, the gap between our foreign policy and our vital national interests widens.

China’s U.S.-backed neighbors also, according to John Mearsheimer, “have an incentive to provoke crises over disputed territorial claims now, when China is relatively weak, rather than wait until it becomes a superpower.” Barry Posen calls this “reckless driving.” Relatively weak states that have the backing of the world’s only superpower are likely to be emboldened to act out in ways that are far more daring than they would otherwise be.

Kazianis quotes former Under Secretary of Defense for Policy Eric Edelman, who says U.S. primacy “provide[s] the collective public goods that have upheld the security of the international system and enabled a period of dramatically increased global economic activity and prosperity.” That’s not obvious. According to Michael D. Swaine, a senior associate at the Carnegie Endowment for International Peace, “the notion that unequivocal U.S. predominance in the Western Pacific constitutes the only basis for long-term stability and prosperity across the Asia-Pacific is a dangerous, increasingly obsolete concept” that is “deeply rooted in both American exceptionalism and beliefs about the benefits of hegemonic power in the international order” that do not stand up to scrutiny.

Insisting on the indefinite perpetuation of U.S. primacy in Asia can be explained in part by this dubious belief that American power is inherently benign and, if other states don’t see it that way, that’s their failing. However benevolent Kazianis believes U.S. hegemony to be, when such formidable power is concentrated in a single state, it is difficult to reassure potential adversaries of its benign intentions.

As Robert Jervis wrote, “The inability to recognize that one’s own actions could be seen as menacing and the concomitant belief that the other’s hostility can only be explained by its aggressiveness help explain how conflicts can easily expand beyond that which an analysis of the objective situation would indicate is necessary.” U.S. statesmen in the postwar era, Jervis explains, “have displayed a similar inability to see that their country’s huge power, even if used for others’ good, represents a standing threat to much of the rest of the world.”

Kazianis writes that China has “[cast] aside the idea of a ‘peaceful rise’” and others similarly depict China as a rapacious expansionist that must be contained. But Beijing’s intentions are, at best, opaque. It’s true that China has employed a more assertive foreign policy in recent years. But many scholars see China’s foreign policy as fundamentally defensive.

Swaine writes that “Beijing’s de facto attempts to limit or end U.S. predominance along its maritime periphery are motivated almost entirely by uncertainties, fears, insecurities, and a certain level of opportunism, not a grand strategic vision of Chinese predominance.” Even scholars who advocate containment, like Princeton’s Aaron L. Friedberg, admit that “It is largely because they see the United States as the most serious external threat to their continued rule that they feel the need to constrict its military presence and diplomatic influence in the Western Pacific.”

This brings us to my concluding point and the core of my initial argument, which Kazianis disappointingly failed to address in his rebuttal. For the present strategy against China to be effective—or, for that matter, coherent—there must be an explanation of how we expect containment to work. In what scenario can we imagine China, whose relative power in the international system is rising, to give up its regional ambitions, overcome its fears of encirclement, and cede regional hegemony to the United States, whose relative power is declining? To use Mearsheimer’s more succinct formulation, “why would a powerful China accept U.S. military forces operating in its backyard?” And, furthermore, how high are we really willing to let this impending security competition escalate, especially when the U.S. can maintain its own unparalleled safety and security without a predominant military presence in the Pacific?

Mr. Kazianis is correct in one sense. He calls my proposal a “fantasy.” That is true. There is something fantastical about my policy preferences. But that is not because they don’t make good strategic sense. Rather it’s because we have built up an entire national security state, bureaucracy and political class that is committed to primacy for both ideological and economic reasons. Maintaining a global military presence and a defense budget that dwarfs the rest of the world is great for the political, bureaucratic and lobbying interests in Washington. They have little incentive to narrow the prevailing conception of U.S. interests, in which every nook and cranny of the globe is perceived to be of great strategic significance. People in government tend not to scrutinize the source of their wealth and power.

That said, the hope that a foreign policy of restraint will soon come into vogue in Washington is no more fantastical than believing that China will be easily pacified in response to America’s forceful reassertion of military hegemony in East Asia.

John Glaser is studying International Security at George Mason University. He has been published in CNN, Newsweek, the Guardian and the Washington Times.