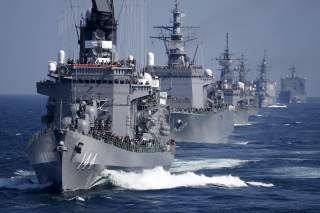 World War II still hasn’t ended, yet World War III already looms. When China and Japan agreed to normalize relations in 1945, it was stipulated that the disputed Senkaku/Diaoyu Islands (a string of uninhabited rocks equidistant from Japan, China and Taiwan) would not be militarized and the dispute would be put off for future generations. That future is here. The recent discovery of large oil and gas reserves under the islands has heated up the situation dramatically, with military budgets surging, and warships, coast guards and fighter jets scrambling to assert control over the commons.

Meanwhile, tensions on the Korean Peninsula have drastically escalated into the world’s most dangerous flashpoint over the past seven decades precisely because the Korean War itself was never formally ended in 1953. Despite the recent summit between Moon Jae-in and Kim Jong-un, neither South nor North Korea has yet to formally recognize the other’s existence, each claiming to be the sole legitimate government of the entire Korean Peninsula. Similarly, the unresolved status of the princely state of Kashmir at the time of the partition of South Asia into independent India and Pakistan in 1947 has been the direct or proximate cause of three major wars and a near nuclear standoff in 2001 between the postcolonial cousins.

These three major Asian fault lines are a reminder that the biggest risk of conflict in the twenty-first century stems from unsettled conflicts of the twentieth century. Asia is awash in other still-disputed territories and boundaries such as Arunachal Pradesh (between India and China, which Beijing calls “South Tibet”), the Spratly and Paracel Islands in the South China Sea (claimed by numerous Asian countries) and the southern Kuril Islands (where there is Russo-Japanese friction, with Tokyo calling them the “Northern Territories”).

The world has been lucky that deterrence, economic integration and a shared distaste for the past two centuries of Western domination have prevented Asia’s major powers from crossing the Rubicon. But rather than simply hope luck does not run out, the solution to these tensions is to immediately seek permanent settlement on peaceful terms.

Ending interminably hot or cold wars requires a different approach to diplomatic mediation than the ad hoc crisis management that has been the norm in these and other conflicts. Indeed, there is a significant leap from traditional mediation to outright settlement. Mediating conflict without a settlement is like turning down the temperature on a pressure cooker without switching it off: the food inside will eventually burn and rot. The temperature can also be turned back up, causing the top to eventually blow off. By contrast, settling a conflict is like turning the stove off, removing the pressure cooker and getting on with sharing the meal. Strategists focused on alliance management and force posture would be well served to take a step back and remember that military maneuvering is not an end in itself. More fundamental than preparing for war is eliminating the need for it in the first place.

In the 1990s, as Western scholars celebrated the “end of history,” a number of scholars advanced the idea that democratic societies do not wage war against each other—what came to be known as “democratic peace theory.” Drawing inspiration from Immanuel Kant’s On Perpetual Peace, which advocated a world of liberal republics, scholars like Michael Doyle, Bruce Russett, Bruce Bueno de Mesquita and others demonstrated this significant historical correlation over time.

Democratic peace theory is both inspirational and aspirational: we should seek to build a world of peace among liberal regimes and societies. But at this moment in history, the theory is of limited applicability. Our purpose is not to test for peace among mature Western democracies but to generate peace among unlike regimes from dissimilar cultures—factors which further complicate strategic communication. We do not live in a liberal global order but a multipolar and multicivilizational one. Adversarial states do not view each other as democratic or peaceful. The structural landscape today lacks the cultural affinities of a world led by Western societies—which did, despite their shared roots, produce two World Wars. Additionally, absent are the domestic institutional constraints of checks and balances that have tended to slow democratic countries from going to war. There is an exception for nondemocracies since democracies declare war on them rather enthusiastically—the 2003 Iraq War just one recent case of how neoconservative values can belligerently weaponize ideas. Simply put: democratic peace theory helps explain why some countries enjoy peace but is not a route to peace.

If we want global peace, then, we need a more culturally neutral and hard-headed approach that I call “technocratic peace theory”: a hypothesis that independent arbitration is better suited to resolving last century’s conflicts among hostile states. This is not, of course, a predictive model. The underlying suggestion, however, is that in a world of diverse regimes, conflicting interests and rising tensions, the best safeguard against war is direct diplomatic negotiations aimed at lasting settlement—not a blind faith that either political evolution or American military balancing will forestall conflict in perpetuity.

Technocratic negotiations must be held away from public scrutiny, even though publics (democratic and otherwise) may be fully aware they are occurring. Furthermore, they must include not only credible official representatives from disputant parties but also neutral international mediators. The solutions they conclude must be considered formal and binding on all parties.

Direct bilateral negotiations of this kind have resolved numerous boundary disputes since the end of the Cold War. In the early 1990s, China settled a half-dozen border demarcations with ex-Soviet neighbors (often in their favor) as a precursor to launching shared institutions with them such as the Shanghai Cooperation Organization. Norway and Russia, as well as Malaysia and Indonesia, also resolved longstanding tensions over resource-rich bodies of water through bilateral agreements involving joint exploration and extraction.

The Balkans also provide an important precedent for the virtues of technocratic peacemaking. The fragmentation of Yugoslavia and wars between its republics—combined with the proxy civil war in the rump Bosnian state—were prolonged by the nationalist democratic politics in Serbia and Croatia. As Edward D. Mansfield and Jack Snyder argued in an important 1995 essay titled “Democratization and the Dangers of War,” immature transition democracies mixed with authoritarian politics can give rise to belligerent behavior, as was certainly the case in the Balkans of the early 1990s. Only with the multinational Dayton process, spearheaded by Richard Holbrooke, were the warring parties cajoled into ceasefire and settlements that gave the region its present political formation. The former Yugoslav republics—now that boundaries have been settled and recognized—have forged a customs union and each has joined, or is on the cusp of joining, the European Union. If every collective agreement had to be subject to national referenda, the Balkans might still have found itself in unending cycles of conflict, remission and relapse. This is the likely fate for the many so-called “frozen” conflicts from Palestine to Nagorno-Karabakh to Kashmir unless more decisive diplomacy is undertaken.

Why is a technocratic peace approach possible now among suspicious major powers?

First, Asia’s leaders have rarely if ever been so strong at the same time. Xi Jinping, Shinzo Abe, Narendra Modi, Vladimir Putin and other regional heads of state are more or less at the top of their games. They are riding high domestically and have political capital to spend. At the same time, none can unilaterally dominate their adversaries (either materially or ideologically), as each pursues an equally nationalistic program aimed at restoring historical greatness. Last summer’s standoff between New Delhi and Beijing on Doklam, a small plateau between China and Bhutan, is a case in point: it was China, not nominally weaker India, that blinked first. Rather than escalate further, Xi and Modi met face-to-face for two days in late April to resume a range of bilateral cooperative mechanisms (including between their militaries) and discuss a framework for resolving their disputed boundaries.

This is also a reminder of the prevailing pragmatism among Asia’s leaders. The political psychology of Asian leaders is not well understood; they are referred to as authoritarians or strongmen, but what they share with even democratically elected leaders, such as Donald Trump, is a survival instinct. Even as they probe for advantages, they are not suicidally aggressive like Hitler or Saddam. In addition to their positive economic interdependence, they all have more important domestic reform programs underway that a costly international conflict might derail.

The fact that many Asian countries have leaders who enjoy high public trust, such as Xi Jinping and Narendra Modi, should play in favor of conflict settlement, for they more or less hold public opinion in their hands. Very often, the excuse for not pushing for outright conflict resolution is the lack of political will or unprepared public—or each used as an excuse for the other. Today neither excuse is valid in Asia. To the contrary, what Asians now have in common is a desire to prove that they can resolve their own disputes without foreign intervention. What has been missing is a process suited to taking advantage of these propitious conditions.