From Bad to Worse in Syria 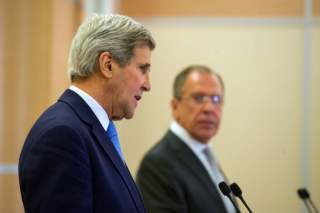 Why are we surprised that the ceasefire brokered between the United States and Russia as a way to end (or at least suspend) the fighting in Syria is unraveling? Washington and Moscow may use the same diplomatic language in crafting joint statements, but they often operate on very different interpretations.

For the American side, the recent cease-fire effort was an attempt to show that Washington, despite its continued unwillingness to escalate its involvement in the Syrian morass, that it has not ceded the initiative on Syria to Russia (and by extension, Iran). U.S. diplomatic power would bring about a temporary cessation of hostilities, allow for the provision of humanitarian assistance to opposition-controlled parts of Syria that are increasingly being squeezed between the Syrian government and the forces of the Islamic State, and perhaps even get a political process started that might, in the long run, validate the Obama administration's demand that "Assad must go."

Suffice it to say, none of the above were critical concerns to the Kremlin. But Moscow's willingness to engage Secretary of State John Kerry's push for a diplomatic process was grounded in the Kremlin's assumption that, perhaps the United States was taking its first gingerly steps down the same road as Turkey's president Recep Tayyip Erdogan: the grudging recognition that Bashar al-Assad was no longer the primary threat in the Syria conflict. While humoring Washington's continued insistence that Assad's departure from power at some unspecified date in time must still be part of any deal, Foreign Minister Sergei Lavrov and his team believed that the U.S. had accepted the reality of Assad's presence for the foreseeable future.

The run-up to the start of the cease-fire--with intensified fighting--also reflected the Russian approach to counterinsurgency. The goal of the cease-fire is not to give breathing room to the Syrian opposition. Instead, the massive campaign which continued right until the temporary cessation began was designed to erode the opposition's position, and solidify the Syrian government's stranglehold on Aleppo. The cease-fire was meant to provide a pause to allow for Syrian opposition figures to re-assess whether to continue fighting or to open talks with the Assad regime. Ideally, Moscow is looking for an Akhmed Kadyrov figure among the Sunni opposition--a rebel commander willing to change sides and ally the with regime in return for a guaranteed position of local autonomy. If the pause in fighting does not induce any defections, then its expiration will signal a resumption of the military campaign.

Of course, the ceasefire process was not welcomed in all parts of the U.S. government. The Russian Embassy--not to mention the Russian Foreign Ministry--can easily read the stories that appeared in the Washington Post and the New York Times exposing the fault lines within the U.S. national security establishment--particularly the opposition from within the Pentagon to the Syria deal, including the provisions for joint intelligence and targeting efforts against the Islamic State. So when U.S. airpower in Syria targeted government forces engaged in combat with Islamic State militants, the Russians, who are not inclined to view the strike as an unfortunate accident hours after stories about how the Department of Defense has misgivings about working with the Russians in Syria, are prepared to assume the worst. Some suggest that it may be payback for Russian strikes earlier this year on Syrian opposition forces trained and equipped by the United States. Beyond that, however, it is interpreted by many on the Russian side as a loud-and-clear signal that the U.S. still sees Assad as the principal problem and does not want his forces to be strengthened during the period of the cease-fire. It also suggests to the Russian side that the United States will not be prepared to entertain any pragmatic compromise on Syria or to put much pressure on the opposition groups that it can influence to be more prepared to compromise (which, in the Russian understanding of counterinsurgency, means a willingness to enter into a government-led political process).

The Russians may be willing to try and keep the ceasefire process alive, but with signs that fighting has begun to escalate, Moscow may also conclude that further diplomatic effort at this point are meaningless. If so, the Kremlin may be less inclined to undertake any effort to restrain Assad and instead encourage him to further improve his strategic position prior to the U.S. elections. Syria's agony is set to continue.

Nikolas K. Gvosdev, a contributing editor at the National Interest, is the incoming Jerome E. Levy Chair of Economic Geography and National Security at the U.S. Naval War College. He is also a nonresident senior fellow in the Eurasia Program at the Foreign Policy Research Institute. The views expressed are his own.