Bahrain Goes to the Polls 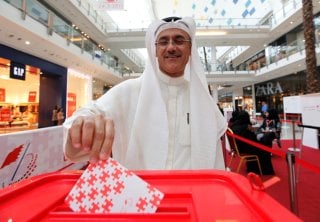 Voters in Bahrain and the United States will go to the polls during the second week of November to elect their legislative representatives. For citizens of both countries, this time-honored rite of democracy holds special meaning. For some, it presents an opportunity to support or rebuke their government. Others consider it a chance to shape the policies about which they feel strongly. All of them believe that their vote matters and that their decisions will shape their future.

The November 12 elections in Bahrain will produce the country’s sixth parliament since 2001. Citizens will choose forty representatives from a field of over 400 candidates in two rounds of voting. Candidates failing to secure a majority on November 12 will face run-off contests on November 19. This year, a record number of women (107) are running for elected office, and it looks likely that more women than ever will enter parliament.

The 2018 parliamentary elections witnessed a voter turnout of 67 percent, a clear indicator that Bahraini citizens wanted their voices heard. Those elected to office represented a full-cross section of society—Sunni and Shia, men and women, young and old. Driving the political enfranchisement of women is the appointment of Fawzia Zainal as the Arab world’s first female Speaker of Parliament in 2018.

Although it may not resemble that of the United States, Bahrain’s system of checks and balances is working. Almost every week that parliament was in session, cabinet ministers were summoned to testify before the people’s representatives. The minister of finance had to defend and adjust the government’s projects on taxation and pension reform. The foreign minister took it upon himself to brief parliament on the Abraham Accords, going so far as to leave Washington the day after the historic Rose Garden signing ceremony to appear before the deputies. He rightly recognized that to be sustainable, Bahrain’s historic peace agreement with Israel had to have public buy-in.

For Bahrain’s parliamentarians, like their American counterparts, the economy ranks at the top of the agenda. Balancing the country’s budget will require painful trade-offs, and the people’s representatives will have a substantive say in accomplishing this overriding imperative. The outgoing parliament forced the government to shelve proposed subsidy reforms, and the new parliament will play a central role in charting a phased approach to austerity measures.

Bahrain’s commitment to democratic pluralism is not just a matter of choice; it is one of necessity. Our national leadership understands that successfully managing today’s challenges requires the full and effective participation of all citizens of good will. Creating a cutting-edge, knowledge-based economy; confronting global pandemics and climate change; or facing down regional security threats must include the direct and active involvement of the entire population. Voting for their parliamentary representatives—and having the confidence that these choices accurately reflect their will—is an indispensable element of this construct.

For this reason, the government of Bahrain has given priority to the transparency of the voting process. Citizens twenty years or older, resident in the constituency of voting, and without criminal convictions are eligible to vote in one of fifty-tour polling centers nationwide. Voting for Bahrainis overseas takes place on November 8. Election monitors unaffiliated with any candidate or political association, as well as candidates or their designated agents, monitor all procedures throughout the voting and counting process. Voters, candidates, and monitors can report irregularities concerning registration, voting, or ballot counting, which are subject to review by the Supreme Civil Court of Appeal.

We have also strived to limit the involvement of religious establishments in politics and to ensure that voting districts guarantee one person, one vote. Allegations of unfair constituency sizes were one of the opposition’s main grievances. As a result of a process led by Crown Prince Salman bin Hamad, 90 percent of Bahrain’s constituencies were redrawn in 2014 so that each electoral district more accurately reflected its population size. The disqualification of clerics of any religious grouping from running for office ensures a clean separation between matters of faith and governance. At the same time, the appointment of Bahrain’s upper house, the Shura Council, provides an opportunity for all religious groupings—Muslim, Christian, and Jewish—to be represented.

As in the United States, there are those in Bahrain who claim that the elections are rigged and that their administration does not reflect the will of the people. My answer to such protests wherever they may occur is simple: work within the system to improve it. No electoral system is perfect, including Bahrain’s, and there will always be a vocal minority who question its legitimacy. While we cannot ignore them, we must nevertheless remain focused on the vast majority of our citizens who believe fervently in the right of representation and making their voices heard.

In the next few days, citizens of Bahrain and of the country to which I have the honor of being accredited will perform one of their most basic and fundamental civic duties. Their votes will determine the future trajectories of their respective governments. Irrespective of the outcome, we are both the better for having chosen this path and for heeding the will of the people.

Abdullah bin Rashid Al Khalifa is Ambassador of the Kingdom of Bahrain to the United States.