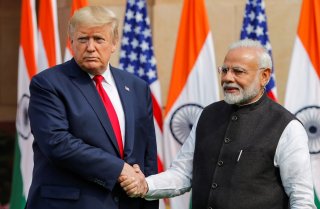 India seems ready to secure its Himalayan borders through an international alliance—the first military alliance aimed at protecting its boundary that New Delhi has joined openly in post-independence history. There is no doubt that a NATO-like Asian democratic “coalition of willing” countries or a global “D-10” grouping will have far-reaching implications for the Indian subcontinent and U.S. Indo-Pacific strategy.

For the United States to counterbalance an increasingly assertive China, President Biden has to push the India policy envelope conceived by the Trump administration while championing America’s founding values of freedom and democracy. By upholding these values on the world stage, Biden would at least be remembered as an authentic U.S. president who re-established the American narrative as the “shining city upon a hill” for the rest to emulate.

Dr. Antonina Luszczykiewicz, a specialist in political and cultural history of China and India at the Jagiellonian University in Krakow, Poland is currently a visiting research scholar at Tamkang University in Taipei. Both are Taiwan fellows of the Ministry of Foreign Affairs in the Republic of China. The views expressed in this analysis neither represent the official positions of the current or past institutional affiliations nor the respective governments.