Baltimore & Ferguson: Threats to the Rule of Law? 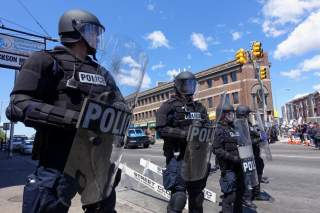 The violent mayhem in Baltimore, and Ferguson before it, reflects a dangerous new development for civil rights. The riots in Baltimore are not simply illegitimate acts inviting a legitimate discussion about the actions of the police in minority communities. Instead, the riots represent a boiling threat to civil rights and the legal architecture our nation has created to protect them. The burning, looting and destruction represents an effort to delegitimize the most effective process the world has known for reaching the truth—the American justice system and the rule of law.

Because of the robust, politically detached and effective grand jury process, the truth will eventually be found in the death of Freddie Gray in Baltimore. In Ferguson, that process eventually revealed that the “hands up, don’t shoot” narrative was a lie. In Baltimore, that process may yield convictions, or may not. Either way, the process works if you have the patience to let it work.

But the mob has no patience. America has developed a legal system with process rules, objective evidentiary standards and statutes designed to deal with police misconduct. These treasured institutions work, and bad cops routinely face justice.

America is far less able to absorb and manage violent racially motivated civil insurrection like what has begun in places like Ferguson and Baltimore. The legal system has the tools to deal with police brutality, but a destructive mob seeking to delegitimize that process is a whirlwind that threatens the rule of law and civil rights.

Consider that racially motivated violence is among the most destructive forces in human history. When mobs in Baltimore run amok and indiscriminately attack peaceful people because of their race, we witness an evil that knows a home in other corners of the world and in other bloody eras of human history. It is an evil far more difficult to combat than police misconduct.

The mob in Baltimore gave America a glimpse of why America exists—to contain the basest instincts of man and channel ancient passions into a calm, detached and objective legal process. When the mob attacks, that containment is lost. No civil right is safe when the containment is lost, when the legal system is delegitimized by a mob.

Of course our system of law does have one way to deal with a racially motivated mob, if the people with power had the courage to use it.

Federal civil-rights laws prohibit racially motivated attacks that deprive Americans of their civil rights. These are commonly known as hate crimes laws. The Justice Department routinely prosecuted street attacks on African Americans or Hispanics that had a racial motive. The theory is you enjoy a federal civil right to walk the streets free from such racial violence. If a black man walking down the street or dining at a sidewalk café is violently attacked by a white attacker because of his race, 18 U.S.C. 245 is implicated. The Justice Department may prosecute the attacker, if the Department has the will.

When I was an attorney at the Civil Rights Division at the Justice Department, hostility toward equal enforcement of civil-rights laws was open conventional wisdom at the Division. The vast majority of lawyers in the Civil Rights Division simply do not believe that civil-rights laws are intended to be enforced equally. At best, they believe prosecutorial discretion should be exercised to give some criminals a pass. Let the states prosecute them, they would tell me. This dangerous attitude was documented at length by the Department of Justice Inspector General in a public report.

If Attorney General Loretta Lynch wanted to differentiate herself quickly from her predecessor, she would also investigate and prosecute those who engaged in the racially motivated attacks on citizens during the riots while she investigates the death of Freddie Gray. That would be one way to bring Americans together, rather than continue policies of division.

The president has inferred that the lack of federal money in Baltimore influenced the riots. That’s laughable considering the billions poured into Baltimore since the launch of the Great Society a half-century ago. If anything, the flame-filled images from Baltimore are a bright reminder that the Great Society failed. Decades of money may have made the situation even worse.

While police brutality is a wicked behavior, the legal process is competent to respond to it. Yet violent racially motivated civil insurrection is far more dangerous. It is contagious. It is unfamiliar, and therefore our system lacks the means to contain it. Winston Churchill warned that “civilization will not last, freedom will not survive” unless those who respect the rule of law employ a “constabulary power before which barbaric and atavistic forces will stand in awe.”

The next time an American city burns, it is time to employ that constabulary power.

J. Christian Adams is a former attorney in the Department of Justice Civil Rights Division. He is the author of the New York Times bestseller Injustice: Exposing the Racial Agenda of the Obama Justice Department. (Regnery, 2011).