Bannon: Robespierre of the Right 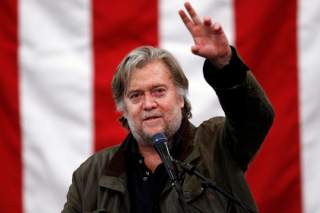 Events since Wednesday—when excerpts of journalist Michael Wolff’s new White House profile surfaced, prompting an unprecedented White House response—have roiled Bannonworld like never before. Since then, the former White House chief strategist has publicly lost his most generous financial backer, the secretive Mercer family, and is reportedly in the throes of surviving a coup attempt against him at Breitbart News.

“Yesterday morning, he was key,” eminent immigration hardliner Rep. Steve King (R-IA) told The Washington Post Thursday. “Today, I’m not sure.” For some on the Right, this has been a long time coming. “Bannon’s importance has always been overstated, especially on policy formation,” American Affairs editor Julius Krein, who supported the broader Trump movement before renouncing it last summer, told me last month. And allies of Mitch McConnell, the Senate majority leader, think they are nearing a rout of their old foe. Further, Matt Drudge, who hates Bannon, is certifiably out for blood.

The president is, of course, a day to day player. Earlier this week, the idea that Steve Bannon could successfully run for the nation’s highest office himself was treated as implausible, but not outlandishly so, among those who entertained the idea in Washington.

A sudden, Wednesday afternoon invective against his old ally replete with the letterhead “PRESIDENT OF THE UNITED STATES” abruptly shook all that up. Given the depth of personal criticism Bannon is said to have levied against the president’s family in this book, allies of the president insist the move was more than fair game.

It is clear inertia and reporting in recent weeks brought out in the open what was openly whispered in the former White House chief strategist’s orbit for some time: that Bannon doesn’t see himself as just the man behind the curtain.

Should the broader Russia matter, or fatigue, or political impossibility preclude a re-election bid by Donald Trump, an attempt by Bannon, his putative ideological heir, to succeed him seemed near-assured. More daunting would be a direct primary challenge to the president himself.

But should the president be vulnerable, or should the president drastically abandon nationalist-populism, would the former businessman, Hollywood producer, military man and Richmond, Virginia native attempt to vault himself to the world-historical significance he sees for himself? As one veteran political observer notes to me, Bannon’s barnstorming around the country for candidates of his choosing mirrors Richard Nixon’s approach in the run-up to 1968: “You’re officially there for someone else, but you’re really, in part, campaigning for yourself.”

“I’m a Leninist,” Bannon told the historian Ronald Radosh at a party several years ago. Bannon is said to have been recently reading a biography of Robespierre, not exactly dispelling the impression he has a penchant for this sort of thing.

Today, to much of the establishment, Bannon’s White House ambitions, and perhaps his broader ideology of nationalist-populism, look doomed. Rosie Gray and McKay Coppins conclude as much in The Atlantic: “The Death of Trumpism Without Trump.” “Bannon was delusional,” budding millennial conservative star, and Breitbart apostate, Ben Shapiro told the pair, “There is no Trumpist movement, there is just Trump.”

Others fervently disagree, including the influential Ann Coulter. “Unlike so-called conservative intellectuals, Trump’s base loved him BECAUSE OF HIS IDEAS,” she told the outlet.

Coulter’s influence has been laid bare by the Wolff book as well: she reportedly personally told President-elect Donald Trump to limit the White House influence of his family, to obviously mixed success.

“I always thought that Trump needed Bannon to provide some sort of ideological ballast and direction, and the split between the two men surely moves Trump towards the GOP establishment and Wall Street types,” Scott McConnell, founding editor of The American Conservative, tells me. “I dread the Trump administration without Bannonism.”

Bannon has mostly been the subject of a sort of perverse media fascination (bolstered by the portrayal of him as the literal grim reaper on “Saturday Night Live”) leading some, including conservative journalists such as former White House correspondent Alex Pfeiffer to argue he’s overrated—honestly near about as harsh a headline as Bannon has ever garnered. What Bannon has not been the subject of, unlike survivor Donald Trump, is rounds of media and political establishment obituaries. That’s all changed now.

Heading into Saturday, this could be, in short, Bannon’s own “Billy Bush weekend.” Bannon is fond of regaling those around him with the story of that October 2016 weekend after news of the Access Hollywood tape first broke. It’s how he took stock who was really on his side, and began, after their team hit rock bottom, to help vault Donald Trump into the White House shortly thereafter. Even Trump’s future chief of staff, Reince Priebus, had been urging Trump to call it quits. And Bannon claims Chris Christie, the almost vice president, was purged from the future Cabinet because he didn’t join the campaign on the plane that weekend.

For one, it’s possible Bannon is already well on his way to recovering some financial support. Drudge touted Miles Kwok, the exile Chinese financier, as Bannon’s new benefactor. Indeed, Bannon has highlighted Kwok’s plight personally to me before, and cited his case as partial rationale for his larger war on Susan Thornton, the State nominee he says is subservient to Beijing.

And in the meantime, one of two things—or both—could force the president and Bannon back into having to deal with each other. The first is policy. Bannonworld and Breitbart News provide much of the intellectual infrastructure for Trump’s program—unless he wants to abandon what he was elected on wholesale. They also share friends.

One example is John Bolton, the former UN ambassador—touted as a possible future replacement for National Security Adviser H. R. McMaster—who has butted heads with the president. Bolton is also the prominent political and financial sponsor for Kevin Nicholson, a rising star in Republican circles, running for U.S. Senate in Wisconsin, a critical brick of the “blue wall” Trump had to dismantle to become president. Bannon and Bolton’s relationship is close enough that the two funneled a plan for decertifying the Iran nuclear deal into conservative mainstay National Review and Bolton continues to meet with Trump at the White House.

A second possibility concerns history. Trump has excommunicated and lacerated people before, only to enthusiastically redevelop strong rapport later on. He once famously gave out Lindsey Graham’s cell phone number to a Republican primary crowd, and Graham fought tooth-and-nail against Trump—even endorsing Ted Cruz, who he called Satanic, as a means of trying to stop the New York mogul. Now the two are golfing buddies. “Lindsey. Used to be a great enemy of mine, now he’s a great friend of mine. I really like Lindsey. Can you believe that? I never thought I’d say that, but I do like him a lot,” the president said at the White House Thursday.

So what did Trump really do this week to Bannon? The president made the former White House chief strategist world-famous.