Bannon: Roy Moore Is a Bannonite on Foreign Policy Too 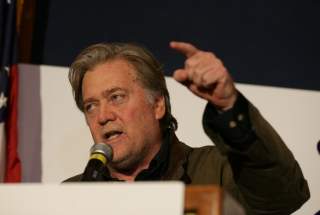 On foreign policy, Judge Roy Moore is a Bannonite. So says the ideology’s namesake. Moore, a staunch social conservative, has mainly developed a domestic political profile in his public career so far. But Steve Bannon told me Wednesday afternoon that he and Moore, who defeated Sen. Luther Strange (whom President Trump had backed) for the Republican primary nomination in Alabama on Tuesday, see eye to eye on global affairs, as well, and that, “yes,” he is every bit the Bannonite on foreign policy.

A request for comment to Judge Moore’s campaign was not immediately returned Wednesday.

Moore, the twice-ousted Alabama Chief Justice, is likely headed to the United States Senate. Bannon and the Trump movement have often been depicted as essentially non-interventionist. My recent reporting indicates a caveat to that, however. While Bannon and his cohort might differ with “the blob” on confronting Kim Jong Un in North Korea or Bashar al-Assad in Syria or Vladimir Putin in Russia, they are much more suspicious of the government of Iran. This distrust appears to be rooted in a distrust of the politics of the religion of Islam itself; namechecking “radical Islamic terrorism” remains a critical litmus test for the Breitbart crowd.

Moore’s victory “shows the depth of the discontent with the conventional party line. It’s a further indication that the Republican foreign policy of recent years, which is still associated with Republican leaders in Congress, has been discredited in the eyes of Republican voters,” Julius Krein, editor of American Affairs, tells me. “But, yes, whatever the new agenda is remains unclear and still needs to be negotiated, though I suspect some commentators are too quick to assume that ‘national-interest based foreign policy’ means paleocon anti-interventionism. The two are not the same.” Paleoconservatism was given a distinct boost by the presidential campaigns of Patrick J. Buchanan and his subsequent co-founding of The American Conservative magazine in opposition to the Iraq War. Buchanan and his allies, of course, seek a far more restrained, non-interventionist foreign policy across the board.

The judge’s website, Roymoore.org, features such language. “We should not be entangled in foreign wars merely at the whim and caprice of a President,” Moore writes on his site. “We must treat sovereign nations as we would want to be treated.”

But there are notable divergences from the paleocons. Like Bannon, Moore is a hawk for Israel. “We should pass the Taylor Force Act and move the U.S. Embassy to Jerusalem.” His writing that the U.S. “should not rely on nuclear reduction treaties which leave us vulnerable to foreign powers” and that it “should reject agreements or policies that undermine Israel's security” clearly alludes to the Iran deal. The pair would part company with Buchanan on that.

And like President Trump, Moore, a graduate of West Point, wants a bigger military. “More funding should be available to develop a missile defense system and to provide our Navy, Air Force, Army, Marines, and Coast Guard with the most modern technology including weapon systems. … Respect for our strength is the best defense. ‘Walk softly and carry a big stick’ is and should be our guide.”

The next move in Bannon’s game of chess may well feature another Iran hawk. Chris McDaniel, a former Mississippi state senator who ran a barnstorming campaign against Sen. Thad Cochran in 2014, is reportedly mulling another bid for the Senate in 2018, at Bannon’s urging, against Sen. Roger Wicker. Back in 2014, McDaniel, like many hardliners, opposed then-Secretary of Defense Chuck Hagel, a Republican, because he was “too soft on Iran.” And in state politics, he opposed Mississippi contracting with companies with investments in Iran.

“It's too early to tell whether the nationalist hawks will be more or less interventionist overall than the internationalist, neocon hawks were,” Daniel McCarthy, editor-at-large at the American Conservative, tells me. “My guess is that while the nationalists will speak more provocatively, abort diplomatic agreements, and ramp up `political warfare,’ they'll engage in fewer large-scale, nation-building interventions.” McCarthy adds that religion is important here, as well. Moore and Bannon are both on record as deeply religious. “Neoconservative foreign policy is sold as a scheme for secular salvation, bringing the blessings of liberalism and democracy and human rights to a world that eagerly awaits them,” says McCarthy. “Moore's religious convictions might help to immunize him against a belief in worldly salvation through American arms and advisers. The battles closest to his heart are the cultural battles at home.” As Moore’s victory demonstrates, it’s a battle that Bannon seems determined to accelerate. So far, he’s succeeding.