Bannon's Pugnacious Restraint May Be Missed 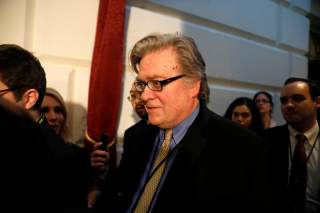 Steve Bannon is out and he’s taking his mass of paradoxes with him. He’s a genial guy and a bureaucratic infighter. He’s a conservative and a self-styled “Leninist.” He’s a brilliant thinker who was prone to cartoonish oversimplification. He’s a populist who worked in the most powerful office building on the planet. He’s Rasputin, he’s Jean-Paul Marat, he’s whoever Washington’s boring Game of Thrones fetish dictates that he be. He was called a white nationalist (unfair), an American nationalist (sure), an economic nationalist (true), and an anti-globalist.

In particular it’s that last one, his allergy to global elites and their Davos-brewed social-engineering projects, that made him an occasional ally of foreign-policy restraint advocates—even if his ideas differed substantially from our ideas. His thinking seems to proceed as follows: America must always put its own interests first, America’s primary interest right now is thwarting the incipient economic hegemon that is China, dotty protectionist policies must be implemented to that end, and a Middle East that’s resisted our designs can’t continue to distract us.

Bannon was probably the best manifestation of the Jacksonian foreign-policy strain in the administration. He had no tolerance for the gauzy nation-building idealism of the George W. Bush era, but he was also hardly an Obama-style missionary for peace: hence his bitter opposition to nuclear deal with Iran. Still, when Trump bombed a Syrian regime air base earlier this year, Bannon reportedly argued against it and his opposition was leaked to New York magazine. “Steve doesn’t think we belong there,” one Bannon confidante said. That Trump went ahead with the bombing anyway was interpreted by New York as a sign of Bannon’s waning influence, though it’s worth noting that the president didn’t follow up with further strikes as many worried he would.

While we don’t yet know why Bannon up and left, White House sources have been whispering for months that he’d lost some heft thanks to his choleric infighting with other administration officials. And no one crossed his ideological wires more than H. R. McMaster, the national security advisor and three-star general who ousted Bannon from his unlikely seat on the National Security Council earlier this year. The tension between the two men reportedly came to a head at a policy meeting about Afghanistan back in July, with McMaster demanding more American intervention and Bannon arguing for a withdrawal. The debate became so fiery that Gen. James Mattis, the secretary of defense, had to step in and play peacemaker. Bannon’s ideological zeal versus McMaster’s martial temper—that must have been quite a fight.

One reason for the strain between Bannon and McMaster was that the latter, sensitive to press coverage, was convinced the former was orchestrating a media campaign against him through the website Breitbart. Another reason is that the two really do have principled disagreements. Bannon still carries the torch of Trumpian nationalism, which, for all its flaws and jagged edges, has internalized the lessons of our calamitous Middle East interventions—that’s more than you can say about the neocons. McMaster, though no neo-Straussian, is probably the most hawkish major player in the administration, particularly on Russia. (Oddly, on the Iran deal, their roles are reversed, with McMaster calling for it to be recertified and Bannon trying to kill it.)

Now Bannon is gone and McMaster’s position appears secure thanks to Gen. John Kelly. Flames promptly erupted from the alt-right, with Breitbart editor Joel Pollak sending a tweet just after Bannon’s ouster that read only: #WAR. Meanwhile, Jonathan Swan of Axios reported that Breitbart was “going thermonuclear.” Expect the attacks on McMaster to continue and the pressure campaign to mount, but those things won’t change the fact that Bannon is now unable to wield influence in those principals meetings. We may come to miss his good sense on foreign policy, however much vitriol and ideological twaddle it was wrapped in.