Barack Obama Is Not a Realist 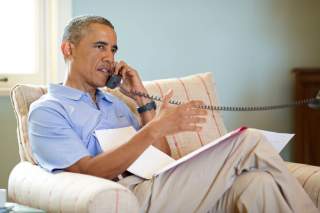 IS PRESIDENT Barack Obama a foreign-policy realist? For most of his time in office, both his supporters and his detractors have said that he is—and until very recently, Obama did not dispute it. On the contrary, the White House often aggressively cultivated the image of the president as a steely-eyed pragmatist judiciously making tough calls on both international and domestic policy. Nevertheless, in his May commencement speech at West Point, Obama finally distanced himself from this, saying that “according to self-described realists, conflicts in Syria or Ukraine or the Central African Republic are not ours to solve” and that this view is inadequate to “the demands of this moment.”

If we take President Obama at his word that he is not a realist—and there are good reasons to do so—his administration’s long flirtation with foreign-policy realism and especially with the Left’s “progressive realists” raises two important questions. First, why were the president and his advisers comfortable with longtime and widely held perceptions that he was a realist? Second, what changed their minds?

Answering these questions with any certainty would require a front-row seat in the White House Emergency Public Relations Bunker that one can too easily imagine the administration building immediately beneath the Situation Room for its most important decision making. Still, it is not difficult to see how the image of foreign-policy realism could appeal to the president and his communications team—it has provided superficial intellectual and political legitimacy to Obama’s frequently expressed desire to concentrate on “nation building at home.” It likewise helped the administration to justify avoiding undue involvement in complex and time-consuming international problems, especially those inherited from former president George W. Bush, whose legacy the White House has publicly repudiated but quietly continued in many respects.

Want to get out of Iraq? Pivot to Asia instead—it’s more strategically important. Need to withdraw from Afghanistan? We’ve done all we can there. Hope to stay out of further wars in the Middle East? Negotiate with Iran and use Congress as an excuse to stay out of Syria. Americans frustrated with Bush’s expensive choices were understandably tempted.

In the end, however, the White House public-relations operation was too clever by half. The administration could not really explain why it was prepared to use force in Libya but not Syria, especially after President Bashar al-Assad appeared to cross Obama’s “red line” by using chemical weapons. More recently, Obama’s carefully built reputation for caution became a growing liability after his oratorically strong but factually weak response to Russia’s annexation of Crimea. Iraq’s sudden vulnerability to the militant group branding itself the Islamic State—and the administration’s struggle to respond—made matters worse by simultaneously calling into question the abrupt U.S. withdrawal in 2011 and the bizarre policy of undermining stability on one side of the Iraq-Syria border while trying to preserve it on the other. The president and his team needed to come up with a new rationale for his policies that would sound reasonable, explain when his administration would use force and when it wouldn’t, and rebut interventionist criticism of his purportedly “realist” approach. Hence the West Point speech, with its dismissiveness toward “self-described realists” and its contorted attempt to establish retroactively useful criteria for using military and other foreign-policy tools.

BUT DID the Obama administration actually ever pursue a realist foreign policy? This question is more complicated, because it requires a definition of realism, but also easier, because unlike its motives (and with the exception of classified programs), the administration’s actions have been open and visible to all.

The principal reason that Obama’s critics and defenders considered him a realist for so long has been his administration’s generally pragmatic policies. But realism is much more than pragmatism; confusing the two is one of the most fundamental and enduring errors in America’s foreign-policy debates. Realism is pragmatism rooted in awareness of international anarchy, infused with a deep understanding of American power and in service of a strategy based on American national interests. Obama is not a realist because his policies typically start and stop with the pragmatic and even the opportunistic. He appears to have excessive faith in international norms, little real appreciation of power’s uses and limits, and minimal interest in foreign policy, much less American international strategy.

Obama’s repeated efforts to contrast the twenty-first century with the nineteenth century highlight his inordinate attachment to rules and norms in an environment of international anarchy where there is no supreme enforcement authority (and he is unwilling to seize the role of judge, jury and executioner for the United States, as many neoconservatives seek). International rules and norms have indeed evolved over the last two centuries, but have not advanced in a linear and progressive manner—far from it. In a fundamentally anarchic system, rules and norms are meaningful only to the extent that they are widely observed by key players. They are therefore inherently fragile and subject to constant interpretation and reinterpretation. They are not “laws” and can only shape state behavior, not regulate or restrict it. (The United States itself has been unwilling to accept such limits.)

At the same time, global rules and norms are in flux. America, the European Union, some components of the UN bureaucracy and progressive NGOs have attempted to redefine them, weakening state sovereignty and legitimizing force to right perceived wrongs. It is naive to expect others—especially dissatisfied major powers like China and Russia—to observe international rules and norms that we ourselves consider inadequate and are attempting to modify. This is a particularly daring assumption when we ourselves often try to change rules and norms through action and precedent rather than negotiation and consensus.

It’s also naive to think that once some major powers question rules and norms, others will not seek to modify them too—and in ways more suitable to their interests than to ours, whether in the South China Sea or in Crimea. Moreover, from the viewpoint of Beijing and Moscow, Washington often appears to go well beyond what its interlocutors believe has been agreed upon in international talks, as in Libya and in the former Yugoslavia’s successive conflicts. For them, the United States is violating the same international law it purports to uphold. Because rules and norms are inherently subjective and open to contending interpretations, these perspectives matter—and arguments about what is “legal” go nowhere. The fact that the U.S. Senate has not ratified agreements like the UN Convention on the Law of the Sea or the Rome Statute, which established the International Criminal Court, does not strengthen Washington’s hand.

Most perversely, however, the rules and norms that existed at the end of the Cold War—the ones that the Obama administration, the Bush administration and the Clinton administration have been trying to change—contributed enormously to America’s power, leadership and capabilities in defending its vital national interests. This was, after all, the system through which the United States won the Cold War. So trying to change the way the world works actually risks destabilizing an international system that is fundamentally to America’s advantage in managing rivals and adversaries. Realists understand all of this. Obama doesn’t.

OBAMA’S STATEMENTS about American power have been even more telling. After Iraq and Afghanistan, it is understandable that Obama—and other Americans—worry about the limits of power. But the president has gone well beyond this, renouncing military power to an extent unprecedented among post–World War II U.S. presidents. Perhaps most telling was his shocking statement in Brussels that Russia could not be “deterred from further escalation by military force”—a dramatic abandonment of a foundational principle of American foreign policy for seven decades.

More recently, Obama said, “Very rarely have I seen the exercise of military power providing a definitive answer.” But an answer to what? Military power will indeed very rarely be a definitive answer to nation building, but it is often quite sufficient in determining which nation owns what—as Ukrainians have painfully learned. (And, as they say, possession is nine-tenths of the law.) Coupled with credible troop movements, a stronger position on Ukraine could have created sufficient uncertainty for Russian president Vladimir Putin to moderate his conduct after his annexation of Crimea. Declaring Moscow’s conduct “unacceptable” and then tying our own hands in responding piles weakness on top of overreach; it is far more dangerous than either weakness or overreach alone and can encourage other challenges.

Even as Obama describes the limits of force, he seems to overestimate his personal rhetorical and persuasive power. How else could Obama think that declaring that “the time has come for President Assad to step aside,” without actually doing anything, would remove Syria’s brutal leader from office? Or that his declarations that Russia’s annexation of Crimea is “unacceptable” will produce real results? This is either outsized self-confidence or remarkable disinterest in the consequences of regularly failing to live up to one’s own explicit and implicit commitments. Neither has any place in a realist foreign policy.

The Obama administration’s lack of any clearly defined international strategy is in some ways the strongest argument against its supposed realism. Obama may often look for pragmatic approaches to individual foreign-policy issues, but in the absence of an overarching strategy, his pragmatism in isolated cases doesn’t build toward any larger objectives. At the same time, Obama’s pragmatism is politically driven at its core, often placing domestic struggles and standing ahead of foreign-policy outcomes. This distorts the decision-making process and produces policies that may sound pragmatic but are actually unlikely to succeed and thus largely unprincipled. His mutually contradictory policies on opposite sides of the Iraq-Syria border are one example; his approaches to China and Russia, which risk simultaneous and thus doubly dangerous confrontations with each, are another. The latter could have profound consequences for America.