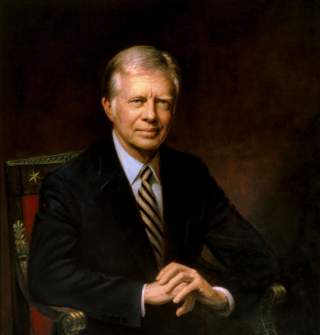 Throughout 2014, a number of articles emanating out of some of the less discriminate precincts of what passes today as serious thought have made play with the idea that President Obama is Jimmy Carter redux. The idea only continues to gain traction in the aftermath of the Republican Party’s big midterm win.

Not so fast. The problem with this comparison is that it’s unfair—to Carter. His record is a lot better than Obama’s. Here’s why.

On the foreign-policy side of the ledger, Obama would be lucky to match the number of concrete achievements Carter was able to rack up after only four years in office. Obama, entering his seventh year, has very little to show aside from the successful 2011 raid in Abbottabad. Obama’s foreign-policy blunders far outweigh his (slight) achievements.

Briefly: Obama was bullied by his Defense Secretary (Gates) into risking (and, more to the point, sacrificing) the lives of young American men and women for a “surge” in Afghanistan that he knew would not work (2009); he deployed American airpower in the service of a violent overthrow of a stable, though criminal, regime in Libya (2011), which then backfired in spectacular fashion at the American consulate in Benghazi (2012); he then acquiesced in the neoconservative strategy of his Assistant Secretary of State for European and Eurasian Affairs Victoria Nuland to foment regime change in countries that had traditionally been within Russia’s sphere of influence, thereby touching off an NCW—a new Cold War (2013-present). This development has already resulted in a renewed nuclear-arms race, which naturally does little to advance Mr. Obama’s purported wish to abolish nuclear weapons.

On the other hand, Mr. Carter, while often caricatured as a hapless chief executive (mainly thanks to the Iranian hostage crisis and the subsequent failure of Operation Eagle Claw) managed to: normalize relations with mainland China (1978); facilitate a peace treaty between Egypt and Israel (1978); successfully negotiate SALT II with Leonid Brezhnev (1979); sign the Panama Canal treaty (1977); and exhibit wise and prudential statesmanship toward the burgeoning Solidarity movement in Poland (1980). Further, unlike Obama, he managed to keep America out of any unnecessary Libya or Afghanistan-like adventures (1977-1981).

A word about the domestic side of the ledger is perhaps in order. The 2009 stimulus and financial-reform packages put together by Mr. Obama and his deeply unimpressive Treasury Secretary Tim Geithner have conspicuously failed to address the underlying causes of the American crisis of capitalism that began with the collapse of the subprime mortgage market in 2007-08. While Mr. Carter’s tenure saw gas shortages, double-digit inflation (11 percent), high unemployment (7-8 percent) and skyrocketing interest rates (15 percent), at the minimum Carter had the courage to address what he, quite rightly, saw as a coming crisis of American profligacy.

On July 15, 1979, President Carter committed political suicide by telling the American people to pursue “the path of common purpose and the restoration of American values.”

At the very least, Carter’s address revealed that he had something of a Burkean cast of mind; unlike Reagan, he was no revolutionary. Carter urged his fellow countrymen to tend their own garden, rather than find satisfaction in hectoring other nations to be more like America. Self-righteous exhortations like “tear down this wall”; “evil empire”; “this aggression will not stand”; and “dead or alive” were and remain anathema to more thoughtful statesmen.

Instead of bombast, Carter’s speech tapped into a rich, Western intellectual tradition that has its roots in an anti-Enlightenment philosophy. Carter—whether he knew it or not—was attempting (unsuccessfully, as it were) to reintroduce a venerable strain of Western thought with regard to the ultimate ends of self-government. Not so with Obama.

In 1905, the British economist and philosopher John Maynard Keynes wrote an essay on Edmund Burke in which he noted, “His goods are all in the present—peace and quiet, friendship and affections, family life and those small acts of charity whereby one individual may sometimes help his fellows.” If the much-maligned “malaise speech” is anything to go by, the same could be said of our 39th President.

No doubt Carter often showed terrible political judgment. He was preachy, hectoring and sanctimonious. But he performed better than his critics would have it. He worked hard. He tried to practice humility. He reached out to other leaders. Camp David was no accident. He set out the course for a new path in the Middle East. His successors did not follow it.

In retrospect, he chalked up some substantial accomplishments and limned a different way for thinking about America’s relations with the rest of the world. Would that Obama could find it within himself to provide something similar.