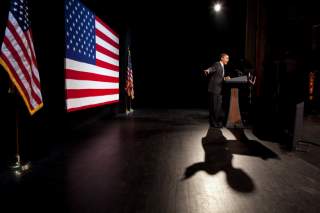 I present these musing under the rubric, “Requiem for the American Republic.” I do so with a profound sadness at the destruction wreaked upon our civic system through the decades-long phenomenon of uncontrolled immigration. In presenting his new policy of granting illegal immigrants legal status through executive action, President Obama said he did so in part because of “who we are as Americans.” Who we are is a nation of laws. Our government has ignored the law for a generation or more in allowing law-breaking immigrants to enter the country. Now the president doubles down on that assault on American law by promulgating an unconstitutional executive order.

Inevitably, those who are unconcerned about the flow of illegal immigrants—either through humanitarian impulses or because they see a political realignment in the making (or both)—can’t perceive why anybody would view the president’s action as the least bit malign.

But this is a brazen assault on the separation of powers doctrine of our Constitution. When the president says his action is “just like [what] law enforcement does every day,” he heralds the arrival in distilled form of Orwell’s “Newspeak.”  Newspeak is a corrosive force, as Orwell made clear, because it contributes to the slow erosion of verities, such as the fundamental elements of the American Creed.

In allowing this flow of illegal immigrants into our country through misfeasance and nonfeasance for the past thirty years (since the last amnesty), our political leaders have driven a wedge through the nation. We now have over 11 million such people in our midst, struggling to make their way through society while grappling with pressures and adversities imposed by their illegal status. This situation is untenable, of course. The president is correct when he says, “Mass deportation would be both impossible and contrary to our character.”

But that isn’t the issue. The issue is whether any effort to craft a reasonable pathway to legal status or citizenship for America’s illegal immigrants will also include provisions designed to protect our borders into the future. Most Americans know that a nation that can’t control its borders is a nation whose very definition is under assault. That’s the trade-off: protect the borders first, then deal with the 11.5 million illegals.

Obama argues that all this fuss could have been avoided if the Republican-controlled House had embraced the bill passed by the Democrat-controlled Senate during the current Congress. But many House members, all duly elected by constituencies back home and answerable to those voters, felt that the bill didn’t sufficiently embrace the trade-off. Not enough border security in exchange for the pathway to legal status.

But there’s another factor here that seldom gets serious attention, in part because left-leaning participants in the debate have sought to delegitimize their opponents’ arguments on it. President Obama hinted at this factor when he said, “I know some worry immigration will change the very fabric of who we are, or take our jobs, or stick it to middle-class families at a time when they already feel they’ve gotten a raw deal for over a decade.”

Leave aside the economic factors enumerated (the threat to jobs or the feeling of middle-class families that they have gotten a raw deal) and focus for a moment on the concern that uncontrolled immigration could “change the very fabric of who we are.” The late Harvard political scientist Samuel P. Huntington explored this phenomenon in his 2004 study, “Who Are We? The Challenges to America’s National Identity.” He said America’s identity, over its history, had been composed at various times of  four elements—ethnic, racial, cultural and political. Over the decades, the ethnic and racial components of the nation’s identity have been cast aside. The country no longer defined itself in these terms. That left the cultural and political components.

America’s traditional culture has been what Huntington calls “Anglo-Protestant.” He explains this by posing a question:

One has only to ask: Would America be the America it is today if it in the seventeenth and eighteenth centuries had been settled not by British Protestants, but by French, Spanish or Portuguese Catholics? The answer is no. It would not be America; it would be Quebec, Mexico or Brazil.

In 1789, John Jay identified six central elements of what Americans had in common—ancestry, language, religion, principles of government, manners and customs and war experience. Of these, common ancestry was the first to go, as more and more immigrants came from countries other than Britain. Over the decades, there was an erosion in some of the others. For example, the religious component in Jay’s day would have been Protestantism; that later was broadened to Christianity. But generally, these cultural norms persisted throughout much of the twentieth century. As Will Kymlicka wrote in 1995, prior to the 1960s, immigrants “were expected to shed their distinctive heritage and assimilate entirely to existing cultural norms.”

That began to change toward the end of the twentieth century, and the single largest factor was immigration. Hence, it isn’t surprising that there should be an underlying concern on the part of many Americans about the impact of immigration—particularly uncontrolled illegal immigration—on the cultural norms of the country. Such concerns are dismissed as illegitimate by many pro-immigration forces in the country.

If the cultural component erodes entirely, as it seems to be doing, then America’s single remaining element of common identity will be the American Creed—principles of governance such as liberty, equality, democracy, individualism, human rights, the rule of law and private property. Huntington raises the question whether mere creed is sufficient to hold a nation together over extended periods of time.

In any event, the fate of America’s cultural identity is not a matter of mere frivolous concern, as many liberals argue. It is fundamental, which is why it unleashes strong emotions in many parts of the country. And these emotions are heightened by the phenomenon of more recent immigrants being increasingly reluctant to shed their own distinctive elements of heritage and increasingly inclined to shun the concept of assimilation.

All of this makes the immigration issue one of the most emotional and threatening issues to appear on the American scene in many decades. Given that, it isn’t an issue with which to be trifled. It is too serious, too delicate, too closely tied to the American identity.

And yet that is what President Obama has done. He has trivialized this most emotional of issues facing the American polity by circumventing the structures of American democracy in favor of a unilateral solution, or partial solution. In doing so, he not only has assaulted the American cultural identity, as others have been doing for some time, but he also has assaulted the country’s identity of creed—the delicately balanced structures of governance designed to preserve the hallowed principles of liberty, rule of law, justice and fair opportunity.