The Battle for Taiwan Is a Diversion for America and China 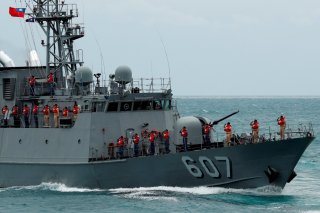 Several years ago, the Chinese Communist Party’s (CCP) leadership decided that the United States and its leadership of the international community is a threat to its survival. Therefore, Beijing seeks to displace the United States and has been executing a campaign to systematically undermine U.S. power and influence. Within this context, an attempt to forcibly change the status of Taiwan, a de facto U.S. partner, appears to be an important battle over primacy in the Pacific. However, even if one deems primacy to be of value, it is not in the interest of the United States to militarily defend Taiwan. In fact, an invasion of Taiwan is a tactical and strategic diversion, which will devour any great power that joins the fray, including the People’s Republic of China (PRC).

For an individual with many personal and professional contacts in Taiwan, this was not an easy conclusion to reach. However, employment of the U.S. military must be based on an objective weighing of U.S. interests. Moreover, this conclusion should not be taken to minimize the peril of an invasion for the Taiwanese. The sovereign state of Taiwan has ruled itself as an independent entity since 1949, irrespective of U.S. and PRC declarations to the contrary. Its people have built a dynamic economy and vibrant civic life. An invasion would cause significant harm to both, even though the invasion is likely to fail in the long run.

In fact, any PRC victory would be chimeric, as Beijing finds itself an occupying power attempting to control a hostile populace, who have been taught the hazards of living under CCP rule by watching seventy years of its reign, including the Tiananmen Massacre and the Hong Kong crackdowns of 2014 and 2019. Taiwanese know the threat posed by PRC rule and will make it difficult for them to govern. Taiwanese activists of the Sunflower movement proved they were willing to take to the streets when they was their freedom threatened, and recent polling suggests Taiwanese are willing to fight.

The PRC will also suffer economically. Although the CCP has long declared its willingness to endure economic pain to ensure Taiwanese submission, it now faces more than disruption of trade. Russia’s invasion of Ukraine has galvanized international public opinion and turned the paper tiger of ineffective government-implemented economic sanctions into a grass-roots force with bite. An already tottering PRC economy would have difficulty weathering such costs, straining the CCP’s ability to legitimize its continued rule.

It has been argued that U.S. credibility will be damaged if it does not defend an ally. However, the United States has no security guarantee to Taiwan—the mutual defense treaty with the Republic of China (Taiwan) was abrogated in 1979—and has purposefully avoided promises of support. Moreover, the United States has no obligation to defend another country because it exercises liberal representative governance. While the United States benefits from the trade and interaction spurred on by the proliferation of open, liberal states, there is a difference between benefiting from a situation and its existence obligating U.S. lives and treasure.

Should a war break out across the Taiwan Strait, U.S. citizens will certainly witness temporary economic disturbances. The cost of many goods will rise as supply chains are disrupted and shipping costs increase for goods transiting the South China Sea. However, an altered economic situation does not in itself constitute a threat to the rights of U.S. citizens. Prices could rise for any number of reasons; none would warrant intervention by the U.S. government, military or otherwise.

More ominously, should an invasion be successful it would expand the PRC’s geostrategic reach, extend its defenses into the western Pacific, and provide a port (Suao) with immediate access to deep water for its submarines. However, none of this prevents the United States from defending its citizens or using its military in the Western Pacific. By contrast, entering the war absent a direct threat to U.S. interests will sacrifice the lives and property of U.S. citizens to the needs of another state. Moreover, it will divert U.S. resources from preparing to defend U.S. interests while reinforcing the CCP’s perception that the Taiwanese want to unify, but the United States and its running dogs will not allow it. Instead, Beijing and its subjects should be forced to see that Taiwan does not desire to join them.

Although fighting is not in the United States’ interest, making the war more difficult for the PRC is. Consequently, the United States should assist Taiwan in preparing to deter or defeat a PRC invasion. In the meantime, America should pursue a positive, values-directed foreign policy, rather than ceding the intellectual and operational initiative by reacting to every instance of PRC misinformation or misbehavior. To this end, Washington’s foreign policy should forget the regime in Beijing and focus on building partnerships with purpose among Indo-Pacific states that are pro-freedom and pro-business. The goal is to shape a region where like-minded partners trade freely and disputes are resolved peacefully.

A cross-strait war does not directly support U.S. interests and should not be fought by U.S. forces. Doing so would overstep the government’s mandate to defend U.S. citizens and unnecessarily embroil the United States in an expensive and draining affair. To do so would divert resources and attention away from the important task of shaping a Free and Open Indo-Pacific region, which will produce greater long-term benefits for the United States, Taiwan, and the region. Instead, the United States should support Taiwan with increased arms sales and training, while highlighting the moral contemptibility of the PRC’s threat of force. This will serve to deter the PRC or, if Beijing is foolish enough to invade Taiwan, embroil them in a costly adventure that will damage the CCP’s image and threaten its position. Ultimately, the United States, Taiwan, the region, and Chinese subjects will be more secure if Taiwan is the sword the CCP dies on.

Scott McDonald is a retired US Marine Corps China specialist, a Non-resident Research Fellow at the Asia-Pacific Center for Security Studies (APCSS), and Ph.D. Candidate at The Fletcher School of Tufts University. He has taught at APCSS, Tufts University, and Wellesley College.  He is co-editor and chapter author of The Future of the United States-Australia Alliance. All opinions expressed in this article are his own and do not reflect the views of any institution or the Department of Defense or the US government. This essay is a runner-up in the 2022 The National Interest/John Quincy Adams Society Student Foreign Policy Essay Contest.