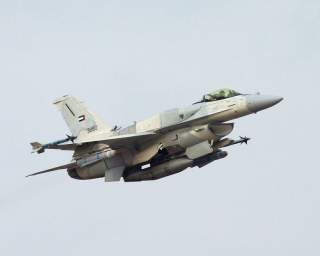 While the United States tries to enlist the support of key Middle Eastern and European allies in its fight against the Islamic State of Iraq and al-Sham (ISIS), at least two Arab countries and France have their gazes set elsewhere—on Libya.

Internally fractured, Libya has two opposing parliaments in Tripoli and the eastern city of Tobruk, and at least two armed formations claim the mantle of the country’s national army. In loose terms, it is also the latest battleground of a bitter regional competition that pits Saudi Arabia, the United Arab Emirates (UAE), and Egypt against Turkey, Qatar and even Sudan—both Qatar and Sudan have been accused of delivering weapons and ammunition to Islamist rebels in Tripoli. The former supports the elected House of Representatives in Tobruk and retired Libyan general Khalifa Haftar, whose Operation Dignity aims to “cleanse” Libya of Islamists in general and the Muslim Brotherhood in particular, while the latter has historically close to ties to a range of Islamists throughout the country and the former General National Congress in Tripoli.

The reality is that Libya’s claim to sovereignty is tenuous, which is why the recent Egypt-UAE airstrikes should have been expected. And as it steadily slides toward civil war, further and perhaps more overt acts of intervention are likely. In fact, on August 13, the Haftar-aligned House of Representatives opened the doors to such an eventuality, calling on the international community to intervene “immediately to ensure that civilians are protected.” Libya’s ambassador to Egypt, Mohamed Jibril, reportedly said that Tripoli might countenance foreign intervention “since Libya is unable to protect its institutions, its airports, and natural resources, especially the oilfields.” Haftar, in an interview with Egyptian daily al-Masry al-Youm, openly supported an Egyptian strike “even if it is in Libyan territory.”

For weeks leading up to the joint Egyptian-Emirati strikes in August, there was consistent talk on how Egypt might be pushed to intervene on behalf of Haftar, whom Cairo has long been rumored to support. In fact, as far back as April—one month after Sisi visited the UAE—there were reports that Mohammed bin Zayed Al Nahyan, the Crown Prince of Abu Dhabi, supported the idea of U.S. and Arab forces intervening militarily in Libya.

From Cairo’s perspective, Libya has spawned various security challenges over the past year. In January, an Islamist militia kidnapped five Egyptian diplomats in Libya’s capital. The following month, extremists were suspected of killing seven Egyptian Coptic Christians on the beach in Benghazi, just one of many attacks against this vulnerable community in post-Qadhafi Libya. And just this past August, an Egyptian was executed in a soccer stadium in the extremist-controlled eastern city of Derna—the first public execution in Libya since Qadhafi’s ouster. The situation for Egyptian laborers in Libya, whose remittances are important for the Egyptian economy, has become so precarious that thousands have fled the country. Although Sisi has denied carrying out any military action in Libya, given political Islamist and hardline revolutionaries’ march on the capital, the Egyptians needed to act quickly. And the UAE was a capable and trusted partner.

The UAE has been attempting to enhance its overall military capabilities, and over the next three years, it is expected to spend up to $12.9 billion annually on defense. In 2013 alone, it signed defense contracts worth $1.4 billion. The UAE maintains one of the most advanced air forces in the Arab world, and in 2011, it contributed small but symbolic air assets to NATO’s aerial campaign in Libya. It is the only country with Block 60 F-16s, the advanced fighter jet whose combat radius is roughly the distance between Cairo and Tripoli.

In recent months, the Egyptians and Emiratis have deepened their bilateral military ties as a part of a new strategy by Egypt to shore up its Arab military alliances. In March, the two militaries held the Zayed 1 exercise in the UAE, and in June, they participated in the Khalifa 1 exercise off the coast of Egypt. The former was the largest ever joint exercise between the two countries, and according to reports, the two militaries worked on joint aerial operations, perhaps paving the way for the airstrikes in Tripoli.

It is fairly easy to envision what a more pronounced Egyptian intervention in Libya might entail. On August 27, days after denying playing a part in the Libyan airstrikes, the Egyptian military held a mammoth military exercise in the west, which Cairo views as its newest military front. This show of force, dubbed Goliath 7, included elements of the mechanized infantry, armored units and artillery, air and air-defense forces, and Egypt’s new rapid deployment force (RDF). While the timing and size of Goliath 7 is noteworthy, perhaps more consequential is the participation of the RDF. Sisi created it as one of his last moves as defense minister. Various Egyptian officials, including Sisi himself, have hinted that Egypt has a right to secure its border with Libya and reduce the flow of terrorism across its borders through military means; the RDF is perfectly suited to lead a more concerted military effort in nearby Libya, should Egypt step up its involvement.

Algeria, which was initially thought to have carried out the August airstrikes, has also steadily strengthened its military posture and defense budget in light of the growing chaos in Libya. Fearful of a repeat of the 2013 Al Qaeda-linked attack against the In Amenas gas facility, the perpetrators of which had allegedly come from Libya, Algerian president Abdelaziz Bouteflika’s government has closed the 600-mile border with Libya. It has also declared nearly twenty closed military zones along the border, stepped up patrols, increased aerial surveillance and deployed S-125 surface-to-air missile systems in response to unverified reports that eleven civilian aircraft are unaccounted for from Tripoli International Airport. Algeria also has a vested interest in Tunisia’s stability, which is inextricably linked to events in Libya, and the two countries have recently increased their joint security efforts.

Like Egypt, Algeria has come out squarely against any intervention in Libya. But in light of the fact that Sisi and Bouteflika recently discussed boosting military cooperation—the two countries have reportedly established a direct line of communication regarding Libya—and Egypt’s purported role in the Tripoli air raids, some Libyans fear that their country will be divided into spheres of operations and influence for the neighbors. In fact, since August, rebels aligned with Operation Dawn have repeatedly accused Egypt and the UAE of carrying out more attacks, most recently in the city of Gharyan.

Among Western countries, meanwhile, France has been the most vocal on the devolving situation in Libya. Jean-Yves Le Drian, the French defense minister, has insisted on numerous occasions that action is needed to counter the “terrorist threat” there, and in the past week, Le Drian and the French chief of the defense staff visited Cairo and Algiers (as well as Abu Dhabi) to discuss the latest developments. France has already intervened once before in response to post-Qadhafi fallout: it quelled the Al Qaeda-allied Tuareg insurgency in northern Mali in 2012. Now it is calling on Egypt and Algeria to play a prominent part in any new effort in North Africa.

Although both Egypt and Algeria claim to be averse to interventions abroad, they have both demonstrated their willingness to act if necessary. After the attempted kidnapping of its ambassador in Tripoli this past May, Algiers reportedly dispatched elite military elements to evacuate him, the embassy staff, and their families. So as Libya’s steep descent continues, it will increase the pressure on these two countries to shape events next door, despite their public predilections not to do so and ostensible preference for dialogue. And as the impulse to intervene grows, they may be forced to move beyond saber rattling and take more sustained action.

Gilad Wenig is a research associate at The Washington Institute for Near East Policy.

Andrew Engel, a former research assistant at The Washington Institute, currently works as an Africa analyst. He traveled across Libya after its official liberation and recently received his master's degree in security studies from Georgetown University.