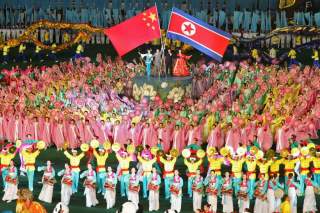 This month in Beijing, Defense Secretary Chuck Hagel asked China’s leader Xi Jinping to do more to disarm North Korea. In February, Secretary of State John Kerry, when he was in the Chinese capital, goaded his counterparts on the same topic. President Obama, while meeting Xi in The Hague during the Nuclear Security Summit in March, discussed the denuclearization of the North.

The Chinese are getting a little peeved by all this recent attention. Beijing’s ambassador to the United States in the middle of this month was unhappy about Washington leaning on his country. “You are giving us a mission impossible,” Cui Tiankai said to an audience in the American capital.

A decade ago, China chose not to use its considerable influence on the North. Now, from all appearances, it doesn’t have much of it. That’s probably why Ambassador Cui complains about receiving impossible missions from Americans.

Cui certainly remembers what happened in December. Then, Kim Jong-un, the young North Korean ruler, had his uncle, Jang Song Thaek, executed. China not only lost its most influential contact in Pyongyang when Jang died in a hail of large-caliber rounds, but it also found itself demonized by the regime as it explained the harsh sentence.

In detailing Jang’s crimes, the official Korean Central News Agency on December 13 made two references to the People’s Republic of China: his selling of “coal and other precious underground resources at random” and his “selling off the land of the Rason economic and trade zone to a foreign country for a period of five decades.” And the charge of Jang being “bribed by enemies” is undoubtedly a reference to the Chinese as well.

Chinese officials genuinely appeared surprised by Jang’s purge and execution, and that is an indication of how much access and influence they have lost in Pyongyang in recent years. When Kim Il-sung and Mao Zedong both ruled, the two states professed to be—and often were—lips-and-teeth close. Then, both leaders were communist, Confucian, Chinese-speaking, and chubby. No wonder diplomacy was conducted on a leader-to-leader basis.

Subsequent generations of rulers on both sides of the border have drifted apart, however, and the execution of Jang signals a rupture. Kim Jong-un had given Jang Song Thaek nearly free rein to handle relations with Beijing. This almost-complete delegation meant that in late 2013, Kim essentially cut himself off from his biggest benefactor when he killed his uncle.

If he had stopped there, relations with Beijing could have been easily repaired. Kim, however, continued his “reign of terror” and is now systematically rooting out Jang’s nationwide patronage network. As the young leader does so, he is eliminating underlings who had handled China matters for Uncle Jang.

While Kim takes down Jang’s friends, he is trying to rebuild his lifeline to the Chinese capital. For instance, he sent Kim Ki-sok to Beijing and Shenzhen in February looking for Chinese money. The young leader even seems to have begun rehabilitating some of Jang’s allies because of their China expertise or knowledge. There are reports that Kim has reinstated two such officials. For instance, the cloud over Ji Jae-ryong, considered a “linking pin” between Jang and China, has been lifted, apparently because he is needed to represent the Kim regime in Beijing.

It is no secret why the North Koreans need China. Chinese cash—in the form of outright grants as well as the proceeds of trade and investment—keep the regime afloat. Yet Kim Jong-un’s actions hardly reflect the growing dependency. The young dictator, after all, felt confident enough to eliminate most of his officials dealing with China and he undertook actions—long-range missile tests, a third nuclear detonation, an abrogation of the Korean War armistice, to name just a few of them—that appeared to have genuinely upset Beijing.

Chinese officials have to be asking themselves why their policies, despite everything, have apparently failed to command the obedience and respect of their destitute neighbor. Since the death of Kim Jong-il in December 2011, the balance of power has been tipping in favor of the weaker party. There are several reasons explaining the seemingly paradoxical loss of China’s clout at a time when the North increasingly depends on Chinese money.

First, Chinese authorities, as a practical matter, do not control cash flowing to the North. Many of China’s investments are large-scale and need formal approval from Pyongyang, giving North Korean officials a high degree of control over them. Moreover, the North Koreans have figured out that China is making many of its investments for strategic purposes, like those at the port of Rason, where the Tumen River empties into the Sea of Japan—what Koreans call the East Sea—and where China has no direct access. The North Koreans, knowing that Beijing must have what only they possess, call the tune. Finally, Beijing has lost control of many of the investment flows into the North because now much of the Chinese money is small-scale and so exits China under the noses of its regulators.

The Chinese have apparently made a decision to support the Kimist state with trade and investment, whatever it does or doesn’t do to displease them. Despite Pyongyang’s especially provocative behavior in 2013, for example, the Chinese continued aid, trade, and investment, and the Kim regime certainly took notice, realizing that Beijing had essentially delinked economic relations from diplomacy. So China’s patience—what some may call an indulgent attitude—works against Chinese influence.

The second reason China is losing pull is that pro–North Korean elements are gaining power in Beijing. By now it is almost certain that Kim has realized that in recent years the Chinese military has gained sway in Beijing and that this trend means he need not worry too much about China’s civilian officials, many of whom detest him and his family.

The apparent ascendance of China’s People’s Liberation Army (PLA) profoundly affects ties between Beijing and Pyongyang because the PLA is given deference on matters involving the Korean peninsula due to the heavy losses suffered in the Korean War. Chinese military officers are known to have views favoring the regime in Pyongyang, and it is no surprise that they do. The ties between Chinese and North Korean officers are forged in blood, held together by shared perceptions, and reinforced by business dealings.

It appears, therefore, the ascension of the military in Communist Party political circles, especially during the recent leadership transition to Xi Jinping, has given Kim Jong-un immunity—or stronger immunity—in China. This immunity tends to reduce Beijing’s influence. It means, for one thing, that Kim has the initiative and that Chinese foreign policy has taken on a more passive tone, a tone of acquiescence even. Acquiescence, by its nature, represents a loss of influence.

Third, a frustrated Washington is taking China out of the game. At the beginning of this century, Beijing was becoming the center of peninsular diplomacy with the start of the six-party talks, which took place in the Chinese capital. China’s diplomats at first assumed that prominent role with gusto, mediating, cajoling, and at times threatening the five other parties, especially North Korea and the United States. That, of course, gave China’s diplomats great leverage in their dealings with, among others, their Pyongyang counterparts.

The special role for the Chinese did not last, however, because Beijing did not produce results. So the six-party process essentially disappeared. The Obama foreign policy team, faced with the failure of China to broker an enduring solution, essentially cut out the Chinese by directly negotiating the Leap Day deal of 2012. The arrangement did not survive two months, but China did not regain its position at the center of global efforts to deal with Pyongyang.

It is true that American officials still troop to Beijing to talk about North Korea, as Secretaries Hagel and Kerry did this year, but their efforts are going nowhere. So China’s influence is not recovering. It is natural for Beijing to try to restart the discussions that would restore its prominence—and its leverage over Pyongyang—but its efforts look half-hearted, perhaps because Chinese diplomats understand that they have missed the moment to put their stamp on the peninsula. In China’s case, repeated failure to move the Kim regime toward disarmament has led to a general loss of influence.

Fourth, the rise of Korean nationalism diminishes the standing of outsiders. Nationalism seems on the upswing in the North as the regime seeks to bolster faltering legitimacy. In the South, it may not be as evident today as it was during the administrations of Kim Dae-jung and Roh Moo-hyun, but it remains the dominant force on the peninsula, always present and always strong. How could it be otherwise in a land colonized for four decades and then divided into two to this day?

Nationalism, of course, is not good for Chinese influence, as China has often been perceived as the enemy of Korea. Koreans know their boundary with the Chinese has moved hundreds of miles in both directions over the course of centuries, and there are now ethnic Koreans in the People’s Republic of China, the result of past Chinese conquests. It is, therefore, likely that the South Koreans will once again openly compete with Beijing for influence in Pyongyang. And when Seoul does that, China’s power in North Korea will surely decline precipitously.