Behind Trump's New Executive Order: A Clash of Worldviews 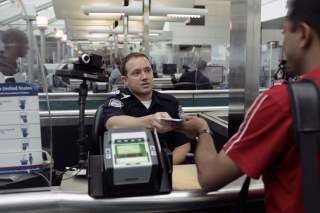 Some so-called norms in presidential politics deserve to be violated. One of these is the priority placed on the “first 100 days.” Even an administration that picks up smoothly where the last one left off would be better advised to implement new policies on a timetable that makes sense for the policies themselves—not within an arbitrary hundred days. With an administration that truly is a break from the past, such as Donald Trump’s, it’s all the more important to set the clock by the policies, not the other way around.

President Trump has now signed a new executive order restricting travel from six Muslim-majority countries. Iraq, which was included in the earlier “travel ban” in January, is omitted this time, at the request of the Defense and State Departments. The countries affected by the new order are Syria, Yemen, Sudan, Somalia, Libya and Iran. Except for Iran, they are all the sites of ongoing insurgencies or civil wars, every one of which is being fought in the name of Islam. The vaunted travel ban has never been a “Muslim ban”—it never applied to Saudi Arabia, for example, or to Indonesia, the largest Muslim country in the world. But the Trump administration has not been coy, as past administrations have been, about acknowledging the role that a murderous interpretation of Islam plays in motivating terrorist groups. (Iran is included, according to the language of the order, because, along with Syria and Sudan, it is “designated by the Secretary of State as a state sponsor of terrorism.”)

The revised executive order makes clear that visitors who hold green cards or who already have approved visas are free to travel from the affected countries, as are refugees who have already been granted asylum in the United States. Criteria for granting waivers are also made explicit; the guidelines cover, among others, infants and young children, those in need of urgent medical care, foreign nationals who have worked for the United States government, and even certain business travelers. Even under the January order, such waivers could have been granted, and in many cases they were. Now, however, there can be no confusion. The ninety-day moratorium on issuing new visas to visitors from these countries—which is what this “ban” actually is—is aimed at curtailing general travel while the Trump administration examines and revises the vetting procedures put in place under earlier presidents.

President Trump and his strategists are absolutely serious about tightening border and immigration controls, both with respect to mass immigration and in particular where migrants from hotspots of radicalism are concerned. As the text of the order explains, “Recent history shows that some of those who have entered the United States through our immigration system have proved to be threats to our national security. Since 2001, hundreds of persons born abroad have been convicted of terrorism-related crimes in the United States.” President Trump is open about prioritizing security concerns over humanitarian impulses, also noting in the order that “the Attorney General has reported to me that more than 300 persons who entered the United States as refugees are currently the subjects of counterterrorism investigations by the Federal Bureau of Investigation.”

The American Civil Liberties Union has already indicated that it will again sue to stop implementation of the order. The furore kicked off by the earlier ban was not really about legal arguments, however. The outrage against the travel moratorium, on the streets and in the press, was the result of a clash of worldviews. On the side of the administration’s critics, symbolic expressions of liberal values—not only humanitarian compassion, but more importantly a benign views of non-Western peoples and religions—take precedence over marginal security concerns. The administration and its supporters do not believe those security concerns are marginal at all, but they also do not accept the moral presuppositions of liberal globalism: they do not think that enlightened consumerism is deep down the true faith of all humanity. Other cultures and other religions have very different values from those of the West, and to change one’s faith and culture is no trivial thing—it’s not like buying a pair of shoes.

This is not “ethnonationalism,” but it seems like ethnonationalism to liberal Americans who are unaccustomed to thinking of other people’s cultures and values as anything other than expressions of personal taste. These liberals are more alarmed by the phantom fascism of Trump partisans at home than they are by the illiberalism that characterizes so much of the Islamic world (including its exclaves in the suburbs of France), because the Right at home is apostate and heretical: those abroad who have never known the gospel of liberalism are merely benighted; those who have heard the good word of John Rawls or John F. Kennedy but reject it are truly damned.

There are good-faith prudential and humanitarian arguments to be made about the travel order: just how much of a security risk is posed by migrants and refugees from zones of insurgency and terrorism is a reasonable question, as is the question of how much risk American citizens can or should accept. And partisans of different worldviews and philosophies do everyone a favor when they openly argue for what they believe. The trouble with the attacks on Trump’s travel order, however, as with so many of the attacks on the Trump administration in general, is that the administration’s opponents do not accept that there can be legitimate differences over the liberal worldview itself. The adherents of that worldview, by and large, have ceased to believe in politics, where such fundamental questions can be argued out. Instead, they wish to have a benign administrative power, whether Republican or Democrat, implement the policies that liberals in both party know to be right. When that does not happen, the liberals do not argue their case politically; they take to the streets or they attack the legitimacy of the government itself—which is only legitimate in their eyes so long as it does what they want, what their values demand.

The clash over President Trump’s immigration order has been an instructive moment. It shows both an administration that is serious in trying to set U.S. policy on a different footing from that of George W. Bush or Barack Obama, and one whose haste and inexperience grinds the gears of government. More importantly, however, this episode has shown how liberals demand fealty to their ideals even when they lose elections. This is a delusional project on the part of liberals, and the sooner it is recognized as such, the better for American politics. Like the hundred-day presidential timetable, it’s a spurious norm that does no good.