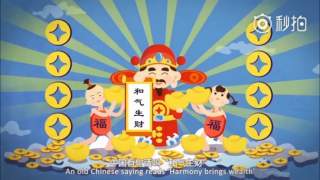 Ahead of an imminent ruling by an international tribunal in The Hague over a case brought by Manila concerning China’s claims to the South China Sea, state-owned China Central Television (CCTV) ran a video on June 21 to highlight Beijing’s argument. The video (sanctioned by the Chinese Central Propaganda Department, or Central Publicity Department in English) was shared by CCTV on Weibo, China’s widely popular microblogging site.

The video seemingly attempts to rally domestic support in advance of the ruling from The Hague, and follows a fairly unsuccessful attempt to rally international support for their maritime territorial claims under a self-proclaimed nine-dash line, or “cow’s tongue.” Through the use of English subtitles, this latest effort at propaganda is not only determined to convince its citizens, but others in the English-speaking world, that its claims to 90 percent of the South China Sea are based on historical facts and deserve respect.

The cartoon video starts off by appealing to Chinese wallets and purses: “Do you want to buy the most fashionable cloth [sic]? Or electronic devices with the state-of-the-art technology?” This economic concern is then linked to politics, as the availability of these goods relies on security in the high seas, “You’d better pray for the peace and safety of the ocean. That’s right, I’m talking about the South China Sea!”

The video uses an historical approach to make its case, as the video claims China was the first to discover and name the Nansha islands (Spratly in English, Trường Sa in Vietnamese and Kapuluan ng Kalayaan in Tagalog). The case is then made that during the Ming and Qing dynasties, China “affirmed the jurisdiction of its sovereignty”—without detailing the specifics.

The narrative proceeds to convince the viewer of Beijing’s good intentions: “China has made various efforts in an attempt to better ensure the safety and freedom of this shipping route. Specifically, China constructed plenty of civil facilities and infrastructures on the South China Sea islands.” No mention is made that these civil facilities and infrastructure can also be used for military purposes; nor is there mention of the surface-to-air missiles placed on Woody Island.

Of course, to be a true piece of propaganda, certain hard-to-digest facts need not be mentioned, and it helps if the presentation is slick and cartoonish, given the short attention spans everyone seems to have these days. Indeed, tens of thousands of Weibo users have viewed the clip, commenting favorably, and pleading, “If you don’t share this, you’re not Chinese.” However, another popular comment referred to China’s historical claims as “lies.”

Unfortunately, through the use of the video, the Chinese leadership has set up its citizens for a major disappointment, as the international court in The Hague is widely expected to rule in Manila’s favor. Beijing also expects to lose, having stated that it will not abide by the court ruling as it has no jurisdiction over the territorial spat with China’s littoral nations.

As we see in the video, there is an old Chinese saying—“harmony brings wealth”—encouraging a “harmonious and healthy relationship between business pals.” A ruling against Beijing could go some way toward damaging economic ties between China and other nations, especially during China’s current economic downturn.

Lastly, given China’s historical turmoil, Beijing has long sought a harmonious populace. Yet by building nationalist sentiment among its citizenry, Beijing has created an angry and dangerous segment of the population that will refuse to acknowledge any international court ruling. Moreover, Beijing may be pressed by its nationalistic citizens to “save face” by retaliating against the ruling in a show of strength against the Philippines or another littoral nation that claims maritime territory. Maybe Beijing should have given more thought to another Chinese saying by Mao Zedong, which states, “A single spark can start a prairie fire.”