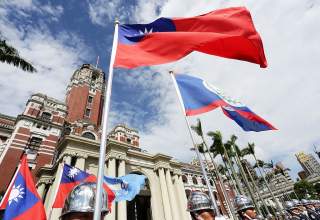 As Donald Trump prepares to become the forty-fifth president of the United States, relations between Washington and Taipei appear on the upswing. A phone call between the two world leaders in early December set a precedent for dignified protocol between the two democracies and key security partners.

Since Tsai Ing-wen was elected president, however, Beijing has ratcheted up political pressure on Taiwan’s international space by attempting to limit the democratically elected leader’s contact with foreign leaders and peeling off the nation’s remaining diplomatic allies. The small African nation of São Tomé and Príncipe flipped on December 20, and this week Nigeria announced that it was demoting ties with Taiwan. Taiwan now has twenty-one diplomatic allies, compared to the more than 170 that recognize the People’s Republic of China.

President Tsai is now making her way through Latin America. This is the second overseas trip that she has taken since she became president of the island nation-state; both trips focused on the same region. Her first overseas trip, in June 2016, was to Panama, which—according to leaked U.S. diplomatic cables—had eagerly wished to establish diplomatic relations with the PRC since 2008, but was apparently told by Chinese diplomats to “remain calm.”

Beijing’s assault on Taiwan’s international space is nothing new. Instead, it represents the latest in a series of escalatory steps in enhanced pressure tactics by the PRC that have included economic threats, military exercises and a pattern of diplomatic coercion that marks a return to the old playbook that Beijing used during the previous Democratic Progressive Party (DPP) government (2000–08).

In 2007, when Costa Rica broke ties with Taiwan after establishing diplomatic relations with Beijing, then president Óscar Arias said the switch was based on “an act of elemental realism.” In other words: money. Over the course of eight years between 2000–08, Beijing bought off nine countries that had diplomatic ties with Taiwan, including Macedonia, Liberia, Dominica, Vanuatu, Grenada, Senegal, Chad and Malawi.

Beijing’s most recent salvos appears to be an attempt to bait the Tsai government into engaging in checkbook diplomacy, in which the two sides offered foreign aid in exchange for diplomatic recognition. Beijing’s desired effect would be to delegitimize the Taiwan government and lower the confidence of the U.S. government on the ruling party’s ability to maintain stable cross-Strait relations. If so, the Tsai administration is not taking the bait. In response to questions about the diplomatic switch by São Tomé, Taiwan’s Foreign Minister David Lee stated, “Taiwan is unwilling to play money games.”

During the Ma Ying-jeou administration (2008–16), Taipei and Beijing reached a diplomatic détente. Taipei did not gain any new diplomatic allies, but as a result of the so-called “diplomatic truce,” Beijing reportedly refused offers of official recognition from four countries with diplomatic relations with Taiwan: Paraguay, the Dominican Republic, Panama, and Gambia. In the absence of a definitive and imminent resolution in the long-standing cross-Strait stalemate, it was probably only a matter of time before smaller nations would be captured by Arias’s so-called “elemental realism.”

The Dominican Republic, another diplomatic ally of Taiwan that is reportedly on the fence, has been courting Beijing since as early as 2013. That year, Economy Minister Temístocles Montás visited Beijing touting a talk on “Prospects for cooperation in the Caribbean Region” at the China Institute of Contemporary International Relations, a think tank affiliated with the PRC’s Ministry of State Security.

According to Jorge Guajardo, Mexico’s former ambassador to China, Beijing’s attempt to establish diplomatic ties with the Dominican Republic is “a shot across the bow from China saying, ‘We won’t go quietly on the Taiwan issue, and we can get allies in other parts of the world that used to be in your sphere.’” Interestingly, the former ambassador added that he “doesn’t think the Dominican Republic would even be considering switching its allegiance from the Republic of China’s government in Taipei over the People’s Republic of China’s in Beijing if Trump wasn’t pulling back from Latin America.” Yet, his assertion belies Santo Domingo’s long-standing efforts to forge closer ties with the PRC, as suggested by the former economic minister’s visits, the leaked diplomatic cables and a series of “unofficial” visits by senior officials that occurred between 2013 and 2015.

After President-elect Trump broke with old conventions and spoke with President Tsai over the phone in early December 2016, the international community’s eyes were on Beijing to see how it would respond. While it would be analytically convenient to characterize Beijing’s actions simply as a response to the Trump-Tsai phone call—which Beijing blames on Tsai’s “petty trick”—this overly simplistic assertion belies the PRC’s longstanding Taiwan policy, which has remained obstinately unchanged since 1981.

Indeed, Beijing was already engaging in a full-court diplomatic press on Taiwan before Tsai even gave her inaugural speech, in which she laid out the basis of her cross-Strait policies and pledges to maintain the “status quo,” and involved a blitzkrieg of extraditions of Taiwan nationals to the PRC. In each of these instances, Beijing asserted that the extradition of Taiwan nationals to China is in accordance with its “one China” principle and implied that any country with a “one China” policy must therefore recognize PRC sovereignty over Taiwan and its people.

Despite Beijing’s ever-growing pressure, U.S.-Taiwan relations appear to be on a positive trajectory. Part of it has to do with Tsai’s low-key approach, some of it with President-elect Trump’s unconventional ways, and most of it because of Beijing’s penchant for shooting itself in its own foot by acting either too aggressively, too prematurely, or both. An example of Beijing’s overzealousness is Gambia. Although Gambia broke diplomatic ties with Taiwan in 2013, Beijing only normalized relations with Banjul in March 2016—before Tsai was even inaugurated and laid out her cross-Strait policy. This was done arguably to use as a diplomatic card against Taiwan.

Furthermore, Beijing diplomats’ predilection for rhetorical flourish was on clear display by the PRC consul general in Houston’s attempt to equate the phone call and meeting with the democratically elected of Taiwan as somehow conferring de jure independence on Taiwan: “For U.S. leaders in administration and legislature, not to make any contact with Taiwan leaders nor send any implication of support of ‘Taiwan Independence’ are in the interests of China, the U.S. and the international community.” The continued emphasis on “Taiwan independence,” however, belies Beijing’s long-standing strategy to impose its definition of “one China” and subjugate Taiwan under the PRC, which is counter to the United States’ “one China” policy.

When sent the letter to not meet with the leader of Taiwan, Sen. Ted Cruz, a former Supreme Court law clerk and 2016 Republican presidential candidate, sounded a defiant tone: “The People’s Republic of China needs to understand that in America we make decisions about meeting with visitors for ourselves.” Senator Cruz added, “This is not about the PRC. This is about the U.S. relationship with Taiwan, an ally we are legally bound to defend. The Chinese do not give us veto power over those with whom they meet. We will continue to meet with anyone, including the Taiwanese, as we see fit.”

Stronger ties between the United States and Taiwan are now more important than ever as Beijing reverts to its old ways. The PRC’s relentless efforts to curtail Taiwan’s international space by curtailing Tsai’s transit stops and buying off Taiwan’s diplomatic allies serve as important reminders of Beijing’s long-standing strategy against Taiwan. With her low-key and measured approach, Tsai has shown that she is a dependable partner of the United States, and the cool-headed leader that Beijing keeps screaming she is not.

As President Tsai prepares for her routine transit stop back to Taiwan through San Francisco, senior U.S. leaders should not allow Beijing to dictate U.S. policy, and meet or at least have contact with the democratically elected leader and major ally of the United States.

Russell Hsiao is the Executive Director of the Global Taiwan Institute, a 501(c)(3) think tank in Washington, DC, dedicated to Taiwan policy research.