Belarus’ Protests Are Bound To Fail 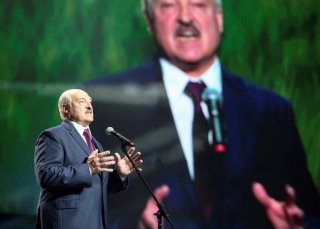 “If our demands are not met by October 25, the entire country will peacefully take the streets with the People’s Ultimatum,” Tikhanovskaya said in a statement. “And on October 26, a national strike of all enterprises, the blocking of all roads, and a collapse in sales at state stores will begin.”

But does this effort have any chance of succeeding? Over the past month, the National Interest interviewed dozens of protestors and activists across Belarus, including several in the days following Tikhanovskaya’s ultimatum. They told us that a new general strike is unlikely to happen.

Many explained that the opposition faces an uphill battle, since a growing number of Belarusians are afraid of finding themselves on the receiving end of the government’s violent response. At the same time, some warned that workers, whose support is imperative for a national strike, are gradually losing faith in the protest movement.

A young labor activist from Minsk, who asked to be identified as Jackir for safety reasons, predicted that few workers would heed Tikhanovskaya’s call for a nationwide strike, arguing that the former presidential candidate lacked the economic program necessary to rally them.

“[Tikhanovskaya]’s a temporary ally, but she’s far from the people,” he said. “She doesn’t want to increase wages or improve people’s livelihood, just give them freedom. We can collaborate with people like her, but definitely not believe in them, or go to the end with them.”

Mass protests erupted in Belarus following a widely disputed presidential election on August 9th, which Lukashenko claimed to have won with 80 percent of the vote. Hundreds of thousands of Belarusians have taken to the streets every week over the past two months to call for new elections. They were soon accompanied by workers at thirty major Belarusian enterprises, accounting for 27 percent of the country’s GDP, who declared a nationwide strike until Lukashenko stepped down.

Yet Lukashenko has managed to hold off this revolutionary wave for now, despite simultaneously facing a worsening economy and new Western sanctions. The nationwide strike gradually died out, while Belarusian security forces have cracked down on protestors, arresting or exiling most of the opposition’s leaders.

Although demonstrations in Minsk continue to attract large turnouts each week, the authorities have proven more successful in stifling protests outside of the capital.

In the southwestern city of Brest, law enforcement dispersed protesters with the military’s help, torturing and even killing some of them, according to a local activist and IT specialist who asked to be identified as Vasily. “We were finding bodies in the river and in the woods,” he told the National Interest.

“When they arrest you, they bring you into a garage with 20 to 30 cops," Vasily recounted. "You walk through them and each one hits you, some with a knee, some with a baton, some with a fist. When you pass out, they throw you into a human pile, and if someone starts screaming, they run up to the pile and beat everyone up.”

Protestors in the western town of Grodno encountered a similar response from the authorities. Irina, a local sales representative, said that the police had “stomped [protests] out at the root” early on by pepper-spraying and arresting many demonstrators. “In Grodno, strikers were detained, anyone who supported the strikers was also detained,” she added. “Now Grodno is [quiet].”

Belarusian authorities show no sign of easing up their tactics anytime soon. Recently, the Ministry of Internal Affairs authorized police to use lethal force against demonstrators, and the Prosecutor General threatened to separate the children of protestors from their parents on national television.

Meanwhile, many workers are deterred from joining new strikes against the government by the prospect of losing not only their jobs, but also their state-provided housing, explained Jackir, the labor activist from Minsk. “[The authorities] completely cut off your oxygen,” he said. “Finding a job becomes very hard because more than 40 percent of workplaces are state controlled.”

Lukashenko’s heavy-handed response to the protests against his rule provoked an outcry from the West. Earlier this month, the European Union imposed sanctions against forty Belarusian officials accused of rigging August’s presidential election and then participating in the subsequent crackdown. That sanctions list was expanded to include Lukashenko himself earlier this week.

Russia, on the other hand, has stood by its longtime ally. In August, President Vladimir Putin announced that Russia had formed a law enforcement reserve that would be deployed to Belarus on Minsk’s behalf “if necessary.” More recently, Moscow placed Tikhanovskaya on a wanted list.

No less significantly, Russia has provided Belarus with financial relief at a time when Lukashenko’s government finds itself largely cut off from international capital markets. Last month, Putin announced that Russia had approved a $1.5 billion loan to Belarus, the bulk of which will be used to refinance the country’s existing debt to Moscow. Earlier this week, the Russian-led Eurasian Fund for Stabilization and Development agreed to grant Minsk a ten-year $500 million loan.

Having provided a boost to Lukashenko, Russia is now looking to manage the transition process. Konstantin Zatulin, deputy chairman of the Russian State Duma’s committee for post-Soviet affairs, told the National Interest that the time had come for Russia to step in as a mediator in the conflict and “start dictating its terms” to both sides.

“Russia obviously does not want to choose the President of Belarus for them, but we understand the current situation has reached a certain dead end,” he said.

Zatulin said that while Moscow wanted to prevent the “radicalization” of the Belarusian opposition, it would also press Lukashenko to amend the constitution and eventually hold new elections. At the same time, Zatulin emphasized that Russia had no intention of jointly coordinating the transition process with the European Union, with many in Moscow still carrying bitter memories from the West’s mediation efforts during the 2013-14 mass protests in Ukraine.

Can Putin broker a grand deal between Lukashenko and the opposition? Some appear skeptical, such as Stanislav, a medical student from Brest, who said, “The demand for violence in society had grown. Some people have already prepared for [violence], even though they held out earlier.” It’s therefore unsurprising that the village house of the Minsk riot police chief was set on fire four days ago.

However, Tikhanovskaya’s attempts to direct the protest face weary workers who are not only afraid for their livelihoods, but are losing hope in the opposition figurehead.

Anton, a social activist from Minsk thinks that “[at this point] people are inspired by each other, not by these leaders.” He noted that there were already similar ultimatums from opposition groups in the past, but the strikes didn’t quite work out, so he doesn’t have “a lot of hope” for Tikhanovskaya’s strike. “I hope I am wrong,” he added.

Dimitri Alexander Simes is a Robert Novak Journalism Fellow at the Fund for American Studies.

David Saveliev is a master's student at the University of Oxford, specializing in protest politics in the former USSR.