Belarus Is Trying to Weave a New National Identity 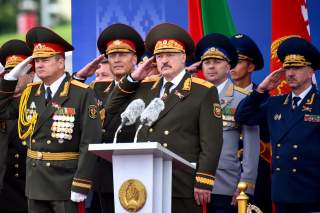 On June 22, 2018, Belarusian president Alexander Lukashenko delivered a characteristically stern address to his body of state officials. “We are at the front” Lukashenko declared to his audience, warning them that a failure to improve performance in the conduct of their duties would not merely be placing their jobs at risk but the very independence of Belarus. “If we do withstand in the next years, we will have to become part of some other state, or others will wipe their feet on us” he continued, “God forbid, there will be a war unleashed in Belarus, like in Ukraine.”

Although Lukashenko deployed the ominous language of wartime, his anger was directed not at personnel from Belarus’s security apparatus but rather a group of local officials tasked with improving the performance of their region’s embattled agricultural sector. Even here, far from the domain of armored divisions or ’hybrid warfare,’ the shadow of a Crimean scenario looms large in the official discourse of Belarusian sovereignty.

In the years after the Maidan revolution and Russia's annexation of Crimea, the prevailing official narrative of Belarusian statehood has become that of precarious tranquility. The Belarusian government has aimed to project an image of a harmonious and stable society. It has cast itself as a net provider of security in a region and world increasingly unwound by the dual forces of domestic upheaval and great power competition.

To make this new ideological narrative into a reality the Belarusian state has deployed a characteristic mixture of adaptation, accommodation and coercion. In a bid to bolster patriotism and reinforce the public’s allegiance to independent Belarusian statehood, the government has implemented tactical adjustments to its ideological and cultural policies in a process scholars of Belarus have dubbed ‘Soft-Belarusianization.’ This process of rehabilitating—appropriating and promoting distinctive symbols and historical narratives of Belarusian nationhood that were once censured—has created an uneasy detente between some elements of the traditional opposition and the state authorities, while likewise serving to isolate further those who do not participate.

In the realm of foreign policy, cognizance of the strategic perils posed by an over-reliance on Russian goodwill has led Belarus to diversify its international engagements; cautiously working to repair its long-strained relationship with the European Union, doggedly courting closer economic and political collaboration with a rising China and preaching a ’pragmatic, multi-vector’ model of Belarusian foreign policy.

Whatever the sincere concerns of the Belarusian state about Russian revanchism, the impetus behind these policy changes also contains a corresponding cynicism. The prospect of war and disorder of war serves as an effective tool for badgering unsatisfactory bureaucrats, attracting the attention of concerned Western governments and enforcing public acquiescence to the political status quo in equal measure.

Nevertheless, the country's altered international environment and the pressures from a widening ideological umbrella of state policy may come to define the future of Belarusian identity. The destructive war across the border may prove to be a catalytic moment, accelerating the process by which traditionally conflicting narratives of Belarusian statehood and national identity converge. This new, singular national concept is built on recognizable and broadly agreeable themes of peace, stability and the dual embrace and appreciation of both Eastern and Western European cultural influence.

The tumultuous experience of neighboring Ukraine influences Belarus' effort to homogenize the different interpretations of Belarusian history and statehood into a unifying ideology. After all, deep social cleavages over issues of historical memory and cultural lineage helped to form the basis of a deeply polarized Ukrainian political system.

Although significantly less profound and more lopsided than those in Ukraine, the most significant divisions in Belarusian politics are similar. They also come from conflicting interpretations over the worth and legacy of the Soviet experience and whether a project of nation-building or civic state-building should take priority in the ongoing construction of an independent Belarus. At the heart of this perceived crisis of identity lies two divergent visions of the country's past and future. The first vision prizes a close cultural kinship to the Russian world and civic appreciation for Soviet institutions. The second vision focuses on the more distant tradition of the medieval Principality of Polotsk, its successor the Polish-Lithuanian Commonwealth of the 1500s–1700s and the nationalist Belarusian People's Republic (BNR) of 1918–1919.

In the years before Lukashenko's ascension to power, and his consolidation of power in the election of 1994 and referendums of 1996, the state and a significant majority of the population distinctly favored the first model. This meant a Belarusian statehood grounded in Soviet mythology and generous social guarantees, while adherence to nationalist narratives of Belarusian statehood primarily became the domain of opposition-minded parties and fell under the legal disfavor of the authorities and their coercive apparatus.

Lukashenko himself, although clearly a believer in a broadly conceptualized statism, nevertheless proved himself over the years to be something of an ideological chameleon. He proved capable of adeptly adapting his message in response to changes in the public mood and has long refused to build a formalized party structure that might tie him too closely to any particular policy platform. Although this fungible ideology long proved an asset in allowing Lukashenko relatively undiluted freedom of movement in the political space, the events in Ukraine in 2014 starkly exposed the vulnerabilities inherent in the country’s perceived lack of a unifying set of national principles.

In the first decades of its independence, politics in Ukraine were characterized by a cyclical exchange of power between political blocs broadly aligned around competing, and frequently antagonistic, visions of national identity and evaluations of the country's traumatic history. So long as Ukraine's foreign policy remained predicated on roughly equal engagement and partnership with both Russia and the West, the latent disruptive potential of these internal schisms was mostly contained. However, that all changed with Viktor Yanukovych's abrupt about-face on the impending Ukraine-European Association Agreement in 2014. The explosive combination of Ukraine's strategic position and contentious internal politics suddenly became clear to the world.

For the Belarusian state, the revolutionary potential of the Maidan Square protests was itself a significant cause for concern but equally so was Russia's dramatic response. Moscow's invasion redressed perceived historical wrongs through the annexation of Crimea. Russia also exploited conflicts over Ukrainian historical memory to form the ideological justification for the sponsorship and eventual rescue of the separatist proto-states in Donetsk and Luhansk. These events were evidence of a frightening and unpredictable new phase of Russia's relationship with its near abroad. Belarus fears both of a Russian response to a Belarusian Maidan and the militant potential of domestic adherents of reactionary Pro-Russian irredentism. As a result, the Belarusian state required a new ideological framing that would serve to mollify the country's cultural and political divides, and likewise simultaneously reinforce its sovereign legitimacy without inviting substantial Russian blowback. It found its answer in resuscitating an old concept from the early days of Belarusian independence—neutrality.

A foreign-policy orientation structured around neutral multilateralism was enshrined as a principle in the Belarusian constitution, but in practice, it was largely superseded by the difficulties of building a closer political and economic relationship with neighboring Russia. Instead, the principle was primarily deployed as a tactical tool when the state sought to extract favorable terms of negotiation by playing to the fears and desires of both Eastern and Western capitals. However for a country endangered by its internal divisions, rhetorically embracing neutrality now offered potential domestic, as well as international, dividends for the state.

The state's ideological turn and integration of neutrality into a master narrative of Belarusian identity are best exemplified by its approach to the hundredth anniversary of the foundation of the Belarusian People's Republic. BNR was established in 1918 under the suzerainty of the Imperial German Army and was one of the many doomed nation-state projects that arose during the spasmodic collapse of the Tsarist Empire.

Although the BNR would vanish from the world stage nearly as rapidly as it had appeared, its territories ultimately subsumed by the BSSR and newly independent Poland, it survived in memory as an inspiration to nationalist circles. For instance, in the first two decades of Lukashenko’s presidency, official ideology in Belarus was overwhelmingly negative in its portrayal of the BNR. This included characterizing it as an illegitimate German puppet-state and mostly removing its symbols and heroes, often associated with the nationalist political opposition, from public life.

Yet for the hundredth anniversary of its foundation, the state pursued a cautious reversal of policy in its approach to the BNR. For the first time, Lukashenko’s government lent its sanction to a celebratory concert in Minsk, patronizing an array of small cultural events throughout the country and televising a discussion of its historical legacy hosted by none other than Lukashenko himself. Although the significance of the state allowing these events has garnered extensive coverage, relatively less has been written about how the state’s framing of the BNR’s legacy relates to its contemporary foreign policy.

Lukashenko’s comments at the televised discussion about the BNR are highly demonstrative in this respect. In their desperation to build an independent Belarus, Lukashenko described the founders of the BNR as running “from under one boot in the East to the boot of the Kaiser in the West.” He argued the BNR’s dependence on German support would prove not only insufficient to maintain its sovereignty but also generated strategic blowback from the embattled Bolsheviks to the East. Those Bolsheviks, who feared the loss of Belarusian territory to rival actors, acted to accelerate the BNR’s demise.