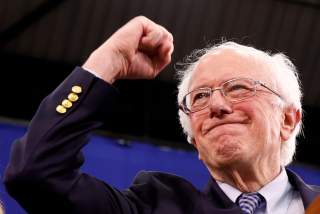 Bernie Sanders believes in American power—and he might get a chance to wield it soon.

No one seems to be able to stop the Vermont senator, who has a clear path to the Democratic nomination for president after winning New Hampshire’s primary election on Tuesday night. Democratic Party insiders have attacked Sanders’s record of past foreign policy dissent as a “liability” but few have grappled with how a future President Sanders might respond to crises around the world from inside the Oval Office.

Foreign policy advisor Matt Duss is the brains behind Sanders’s effort to end the Saudi-led war in Yemen, which is the senator’s most ambitious foreign policy initiative since his unsuccessful run for president in 2016. Duss told the National Interest about his view of international politics—a view that dives into power politics and the looming struggle with China head-on.

“Countries have their own interests and we expect countries to pursue those interests,” Duss said. “Our goal is to find ways and identify areas of common interest with as many other countries as we can. And where there are differences on issues of importance to us, we will make a bigger effort to find ways to bridge them.”

The first steps of a Sanders administration would be made toward rejoining the Paris Agreement to fight climate change and the 2015 “nuclear deal” between Iran and six world powers. Sanders would also try to bring together the United States with its Latin American neighbors in a “hemispheric summit,” and sit down rival powers in the Middle East to work out a “regional modus vivendi.”

But he also did not shy away from America’s clash of interests with China.

Sanders is a longtime critic of the idea that trade would liberalize China, and Duss pointed to the “atrocious” campaign to assimilate Uyghurs and other Muslim minorities in Xinjiang as an example of how this theory has failed.

Duss cautioned against rushing into a “new Cold War” but he also warned that any new arrangement with China has to be “designed to advance human rights, including protecting labor and the right to organize, and environmental protections.”

“We will be clear about what our goals are with China," he said.

Duss also slammed “the Trump administration’s hardline ‘all or nothing’ approach” to North Korea even though Sanders has said he would continue the “personal diplomacy” that current President Donald Trump began with North Korean leader Kim Jong-un.

The Trump administration is demanding that North Korea give up its nuclear arsenal upfront as part of any arms control deal.

“We need to start a process for sustained talks with the North Koreans and to be willing to offer limited sanctions relief in return for verifiable steps that constrain their nuclear and missile programs, including putting them under inspections,” Duss said.

“There's strong support in South Korea for ending the conflict, having better relations with North Korea, and reuniting families. We should be supporting the reconciliation process between North and South Korea, not being an obstacle to it,” he continued. “The way to achieve real security on the Korean Peninsula is to finally declare the end of the Korean war, and help to advance inter-Korean cooperation."

A Sanders administration would take a similar approach to the Middle East—encourage the local powers to work out their problems. The goal would be to withdraw all U.S. forces from Iraq, Afghanistan, and Syria by the end of Sanders’s first term “in a way that contributes to stability rather than bringing about greater insecurity,” according to Duss.

“You will see a more focused and assertive effort to work with partners in the region and the international community more broadly,” he said. “We need to work in support of talks between the Saudi and Iranian governments.”

Sanders, who volunteered on a collective farm in Israel as part of a Jewish youth organization in the 1960s, has also called for a U.S. effort towards “resolving the Israeli-Palestinian conflict” by creating an independent Palestinian state.

His administration would engage with the “political constituencies amongst both peoples—Palestinians and Israelis—who genuinely want peace, who genuinely want an end to [Israel’s] occupation” of the Palestinian Territories, Duss said. “Our policy would be to empower those constituencies, to work with them, to work with leaders who share those goals.”

Duss added that a Sanders administration could even make efforts towards resolving the Turkish-Kurdish conflict: “I think we do have an interest in helping to ensure that the Kurds in Syria are protected. How we move forward will be determined by realistically assessing what tools we have to create that outcome, what are some of the risks we might encounter, and how we can minimize these risks.”

But the most urgent goal in the Middle East would be to end the current crisis with Iran. Trump attacked an international 2015 nuclear arms control agreement with Iran and replaced it with a campaign of economic sanctions aimed at putting “maximum pressure” on the Islamic Republic. Since then, the United States and Iran have come to the brink of war several times.

“Despite claiming to want another deal with Iran, the Trump administration and their hardline allies have been openly working to prevent any future administration from getting a deal,” Duss said. “But in the same way that this whole morass of sanctions has been built up by the executive branch, our next executive can start to dismantle it.”

“The Sanders administration will come into office having pledged to pursue diplomacy with Iran and will, therefore, have a big political mandate to follow through on it,” he said. “That's what we'll do.”