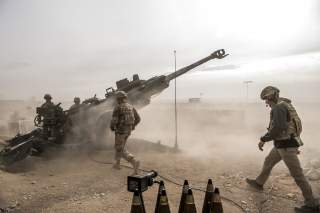 Beto O’Rourke recently pitched the idea of a war tax, one of the more iconoclastic proposals of the 2020 Democratic primary. According to his proposal, households that make more than $200,000 would pay $1,000 a year, those making less than $3,000 would pay $25, and the revenues would go toward veterans’ health care.

Noah Berlatsky at NBC Think immediately labeled it “the most radical antiwar policy” of the 2020 Democrats. The war tax would give individuals skin in the game and upend the public apathy that has contributed to perpetual war.

Adam Weinstein at the New Republic had the exact opposite take. He vilified the proposal as “classic democratic militarism,” in fact doubling down on the vitriol by commenting that “in the annals of terrible American militaristic policy proposals, few are sillier and less punk than self-identified Fugazi fan Beto O’Rourke’s de facto patriotism tax.” Worse, the notion that people will oppose war more when they pay for it, he argued, is “empirically wrong” and that “there's nothing progressive about distilling war's ravages down to a half-baked, Adam Smith–style exercise in taxpayer burden-sharing.” A related critique on Twitter observed that the proposal was tantamount to a tax of “non-participants in our imperial ventures to fund war crimes.”

How can the proposal be seen as both antiwar and a case of democratic militarism? Answering that question requires taking a step back and thinking about the principles that underlie a war tax to be able to evaluate the merits of this proposal.

The premise of democratic theory is that democracies have fought shorter and lower cost wars because they pass along the costs of war to the voting public. With visible costs, the public scrutinizes the wars more closely and pressures leaders to bring an end to wars, or not start wars, that do not warrant their fiscal sacrifice. The “Adam Smith-style” aspect of war taxes was, as Smith wrote centuries ago, “every new tax is immediately felt more or less by the people. It occasions always some murmur, and meets with some opposition.” People notice tax increases, and tie war taxes with a war, and condition their support accordingly. There is actually empirical evidence to support the intuition. Survey experiments conducted both in the United States and the United Kingdom have shown that support for war, conditional on it being financed by taxes rather than debt, declines between about 8–12 percent. Indeed, this is the part that could, as Berlatsky suggested, have “radical potential to change the political calculus around foreign intervention.” Leaders looking to maintain support for the war and for their own tenure in office, have incentives to heed public opinion.

But the idea of war taxes should not be dismissed by progressives as neoliberal, capitalistic claptraps. At the outset of World War II, progressive economist John Maynard Keynes wrote How to Pay for the War: A Radical Plan for the Chancellor of the Exchequer, and offered his proposal for a progressive war tax. He made an unabashedly normative case for progressive taxation—steeply higher tax rates as income increased—as a way “to snatch from the exigency of war positive social improvements.” The move followed the precedent from several previous wars including World War I and the Civil War in which taxes increased commensurate with income. As Scheve and Stasavage show, countries involved in World War I mobilization reached for progressive taxation as a way “to more fairly distribute the burden for the war effort.” Since the burden of war was concentrated disproportionately on those deployed to the front, the burden of finance should be distributed among those who could pay at home.

In the last decade or so, several members of Congress have proposed war taxes with these antiwar, progressive objectives in mind. In 2009, former Democrat Rep. David Obey cosponsored a Share the Sacrifice Act intended to “end the practice of paying for the war in Afghanistan with borrowed money,” stating that “the only people who’ve paid any price for our military involvement in Iraq and Afghanistan are our military families. We believe that if this war is to be fought, it’s only fair that everyone shares the burden. That’s why we are offering legislation to impose a graduated surtax so that the cost of the war is not borrowed.”

The subtext of the proposal was distinctly antiwar. Draw attention to the cost of war, and maybe the public would sour on them. Except that politicians quickly sour because the whole reason why there’s a theoretical connection between fiscal sacrifice and the conduct of war is that these taxes are politically unpopular and ultimately toxic nonstarters.

So far, the proposal is not only intuitively but empirically sound as an anti-war policy. Why then the charges of silly democratic militarism? Taxes are ultimately a game of distributional politics, with winners and losers. By making the winners of the policy the uniformed military, O’Rourke’s proposal ensures that the uniformed military is the beneficiary, which would be a debacle for civil-military relations. It lionizes the military caste at the expense of the civilians, exacerbating the continuing chasm between civilians and military members rather than bringing the two groups together.

Weinstein concludes that instead of war taxes, we should “simply end wars.” However, the status quo of ongoing war since 2001 suggests that the idea of just ending wars is easier said than done. Even having the debate about how to pay for wars, how, and what consequence is at least a start, but doing nothing here is actually doing something—allowing the wars to continue without meaningful engagement from the public and accountability from the government.

Sarah E. Kreps is a Professor of Government at Cornell University. She Tweets at @Sekreps.