Beware China: America Fights Back in the South China Sea 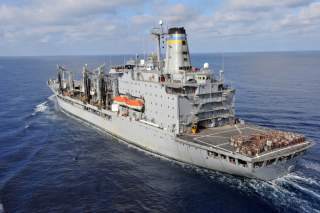 In recent years, China’s inventive engineering feats have allowed it to create more than 3,200 acres of new land in the South China Sea. The result has been to heighten tensions and allow Chinese forces to more easily project military power across the region.

Beijing’s moves have prompted Washington to counter Chinese assertiveness by forging a new strategic alignment in the region—one in which China dominates the South China Sea from the north, the United States and its partners do so from the east and west, and the states of continental Southeast Asia remain neutral or lean toward Beijing in the intensifying U.S.-China strategic competition. This alignment will further U.S. goals: to continue to mount a forward defense, to keep the seas and skies free, and to promote prosperity and the spread of democracy.

This new strategic map of Southeast Asia actually began to take shape during the Bush administration, which initially launched the effort to move beyond America’s traditional hub-and-spokes alliance model in the Asia-Pacific. But the new map’s contours truly began to crystallize earlier this year, when the Philippines’ Supreme Court ruled as constitutional a new defense agreement with the United States. Thanks to the Enhanced Defense Cooperation Agreement (EDCA), American power projection capabilities will be regularly present in the Philippines for the first time since the early 1990s.

During the George W. Bush administration, U.S. forces in the Philippines were focused primarily on aiding the Philippine military in its counterterror fight. Now, the two militaries will increasingly exercise and train across a broad spectrum of military operations, from the low end to the high. Importantly, American access to four airbases (with potentially more to be made available at a later date)—especially those on Luzon and Palawan—will make U.S. air power “resident” in Southeast Asia.

This access will allow for more frequent, more sustained flights over the South China Sea, including over the disputed Spratly Islands and Scarborough Shoal. Importantly, the Air Force’s presence on Luzon, perhaps to be followed by regular naval rotations in Subic Bay, will put the United States in a better position to quickly seal up the Luzon Strait, which links the South China Sea to the Philippine Sea and the wider Pacific Ocean.

The U.S. military’s enhanced ability to loiter in and over the South China Sea, moreover, will facilitate more effective efforts to track Chinese submarines sailing from the PLAN’s underground naval base on Hainan island. Navy P-8s are now regularly deploying to Singapore and, although without regular access, they have conducted patrols from Malaysia as well. American littoral combat ships are rotating through Singapore, at the South China Sea’s western extremis, and the city-state has also quietly built the only Asian port outside of Yokohama at which an American aircraft carrier can dock. The USS John C. Stennis tied up there for a few days in April.

Even if Beijing’s island-building campaign succeeds in turning the South China Sea into a Chinese lake, it will be one in which Chinese forces are constantly monitored and from which they can only depart with implicit American acquiescence.

Then again, China may see its efforts in the South China Sea blunted. The Obama administration’s decision to lift the decades-old arms embargo on Vietnam is instrumental here. In the near term, this could lead to sales of intelligence, surveillance and reconnaissance equipment as well as patrol boats to allow Hanoi to better keep an eye on goings-on in the western South China Sea. Over the longer term, American defense contractors may have their sights set on sales of fighter aircraft and attack helicopters. Vietnam already flies modern Russian fighter jets and is expecting delivery this year of its sixth and final Kilo-class submarine—submarines so quiet that the U.S. Navy refers to them as “black holes.” If the Chinese Navy wants to have its way in the South China Sea, it will have to dedicate resources to tracking those subs, a task with which the PLAN has limited experience.

When China moved a massive oilrig, the Haiyang Shiyou 981, into Vietnam’s exclusive economic zone in 2014, Vietnam had limited options to respond, at either the low end or the high. With a maturing coast guard, navy and air force, Vietnam will become an increasingly prickly foe. Beijing may not find it quite as easy to run roughshod over Hanoi in the coming years.

The lifting of the arms embargo also opens the door to other forms of U.S.-Vietnam security cooperation. A new arrangement for U.S. naval access to Cam Ranh Bay may well be in the offing. Hanoi will move cautiously and such access may be limited to the purposes of logistical support for the time being. But if China continues to play its cards wrong and if the United States proves itself a dependable partner, American warships could one day regularly operate out of Cam Ranh Bay, the strategically located port-of-call, for the first time since the Vietnam War.

Such access would complement the renewed U.S. presence in the Philippines; facilitate a regular American presence in the western part of the South China Sea; enable the United States to more easily defend—or seal up—the Malacca Strait; and, it should be noted, put American forces within striking distance of major Chinese bases on Hainan, including port facilities that host China’s ballistic missile submarines.

Less sexy but no less important is a forthcoming arrangement by which Vietnam will allow the United States military to preposition supplies and equipment in Da Nang on the central coast. Talks are focused on articles that are relevant to disaster relief, but the agreement’s eventual parameters could expand as the U.S.-Vietnam security relationship matures.

Should those ties continue to expand, moreover, the United States may find that it has greater flexibility in dealing with a vexing regional ally: Thailand. The U.S.-Thai relationship has suffered since the 2006 coup that overthrew Thaksin Shinawatra and especially since the latest coup, which saw the military take control in 2014 and stubbornly cling to power.

Thailand, of course, has been an important security partner for the United States. “The strategic value of the alliance remains high,” according to the Congressional Research Service:

*** “U.S. access to Thailand’s military facilities, particularly the strategically located and well-equipped Utapao airbase, is considered invaluable. Utapao has been suggested as a permanent Southeast Asian Humanitarian Assistance and Disaster Relief (HADR) hub. It can receive large aircraft (including C-17s and C-130s); it is close to a deep seaport; and it has infrastructure capable of handling command and control systems. The U.S. military used Utapao for refueling efforts during operations in Iraq and Afghanistan in the 2000s, as well as for multinational relief efforts after the 2004 Indian Ocean tsunami and April 2015 Nepal earthquake.”

The U.S.-Thai alliance has also served as a platform for important training exercises. The annual Cobra Gold exercise is Asia’s largest multilateral military exercise. Walter Lohman has described Cobra Gold as “an achievement that has proved useful for military missions, such as joint patrols of vital sea lanes, and noncombat missions, such as disaster relief following the 2004 Indian Ocean tsunami and the 2008 Cyclone Nargis in Burma.”

Unfortunately, the allies now lack a shared strategic outlook, thus reducing the impetus to overcome recent bilateral political hurdles. In particular, Thailand has a much more benign outlook on China’s rise and on its activities in the South China Sea, and although suggestions that Bangkok would dump Washington for Beijing are certainly overstated, Thai elites are hesitant to be drawn into what they see as a U.S. effort to contain the kingdom’s largest trade partner.

Ironically, the United States is drawing closer to communist Vietnam, in which human rights are serially abused, while growing apart from a major Vietnam War ally, largely due to concerns over democratic backsliding. Expanding U.S. access to Vietnamese facilities as described above could eventually render access to Thai facilities somewhat redundant, further weakening the institutional support for the alliance in the United States.

That redundancy will grant the United States flexibility in a couple of ways. First, the United States should feel more confident to pressure the junta on human rights concerns. Such pressure should focus on concrete, near-term objectives, such as putting a stop to “reeducation” of regime critics.

Second, the United States should feel comfortable adopting a patient approach in pushing a return to full democracy in Thailand. That should, of course, remain the goal, but Washington must recognize that Thailand is in the midst of a decade-long political crisis, which is unlikely to be resolved until after King Bhumibol’s passing and the royal succession is completed. Even then, the country’s division between royalists and red-shirts will likely endure. The Thai people are lurching towards a new political arrangement, a process that Thais have to see through for themselves. The United States needs to maintain a difficult balancing act, supporting the democratic aspirations of the Thai people while remaining a security and economic partner of choice for the elites and armed forces.