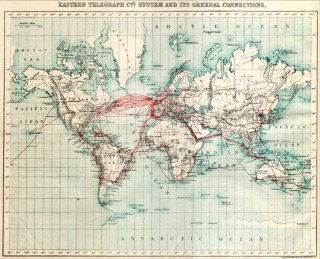 However, late seventeenth-century Britain’s advanced banking and taxation system meant that it could afford to build a navy and merchant fleet that would dominate the world’s oceans and provide the financial support to continental allies that would time and again defeat French attempts to dominate Europe. During the nineteenth century, this same financial prowess helped Britain maintain a significant naval advantage over its French, German, and American rivals while its adoption of free trade vastly expanded its commercial activity around the world. By World War I, British merchant ships accounted for half the tonnage of the world’s merchant fleets, four times as much as Germany and ten times that of the United States. To maintain its dominance in global trade, Britain constructed a global network of ports and harbors that the whole world would soon come to depend on, particularly after the switch from sail to coal-burning steam engines. By the turn of the twentieth century, 80 percent of the world’s ships would burn British coal, widely recognized as the best in the world. In the mid-1800s, Britain would also lead a telecommunications revolution as it laid the undersea telegraph cables connecting the world. By World War I, the Earth’s navies and merchant fleets were powered by British coal supplied by British bases and communicated using British telegraph cables.

Ironically, Britain would play a key role in America’s rise; British support was essential for a U.S. victory in the Spanish–American War, which marked America’s emergence as a world power. London warned off the French and Germans from entering the conflict in support of Spain, and then allowed the United States to use its imperial network to supply U.S. naval forces.

Following the destruction of the USS Maine in Havana Harbor, then-Assistant Secretary of Navy Theodore Roosevelt ordered Commodore George Dewey to take the Asiatic Squadron to Hong Kong where it would refuel its reserves with as much British coal as possible. However, when the squadron reached Hong Kong, all of the city’s stores of coal had been purchased by European navies concerned that war might break out over China. Low on both coal and ammunition, Dewey needed to contact Washington to arrange for their delivery.

The only means possible was through Britain’s cable network. Though knowing war with Spain was imminent, British authorities ignored neutrality laws and allowed Dewey to contact Washington, which then purchased a British collier to supply Dewey with coal and sent another ship with the needed munitions. Britain, as Japan did, could have closed its harbors to Dewey’s ships, refused his use of its telegraph lines, and declined to sell the needed coal to power Dewey’s ships. Dewey would have been stuck in Asia helpless, and the Battle of Manila Bay might never have happened.

Whatever relative decline Britain’s rivals might have enjoyed was tempered by the realization that they traded, deployed their naval power, and communicated across the world only with Britain’s blessing. It would take far more than uneven economic growth rates to topple Britain’s global dominance. In fact, it took two world wars to exhaust the nation financially and force the United States to fully mobilize its resources to defeat the Third Reich. Britain began World War II a world power and finished nearly bankrupt, with its survival dependent on American largess in the form of Lend-Lease and later the Marshall Plan.

TODAY, AMERICA enjoys even greater military and institutional advantages than did Great Britain a century before. America’s global military networks, power projection capabilities, and financial strengths are far beyond those of any of its current rivals, including China. America also has powerful, decades-long alliances with European and Asian powers that Britain never possessed, nor China can match. Furthermore, the global extent of America’s cultural penetration is unprecedented in history: nearly every corner of the globe is influenced by American social, cultural, and political ideals. These social and cultural networks weren’t built overnight, but were the result of decades of American efforts begun decades before it could even contemplate supplanting British power. Indeed, when Henry Luce first coined the term “American Century” in 1941, it was not a statement about America’s future, but a reflection on the growth and spread of American influence over the previous seventy years.

With its rapid economic growth and increasing presence around the world, China has elicited concerns in the United States via its many international initiatives, including its Belt and Road Initiative, the promotion of Huawei’s 5G cellular system, and an undersea cable program. Nevertheless, given the entrenched power of the United States and the enormous effort required to overthrow a dominant power, it is wholly premature, short of a devastating major event, to claim that we are witnessing the end of America’s global dominance. This is especially true as Chinese growth forecasts are dropping significantly; prior to the COVID-19 pandemic, the financial news service Morningstar predicted a then-unheard-of 3 percent level of growth. Now, after a months-long economic shutdown, many analysts believe China’s economy to have sunk to depression-era levels.

The pandemic only fuels controversy over Chinese statistics making predictions that China will one day control 40 percent of the global economy—such views seem exceedingly far-fetched. As it stands now, U.S. GDP remains significantly ahead of China’s, even factoring in GDP reductions due to the effects of COVID-19. Clearly, the nation that recovers most effectively from the crisis will have a greater claim to world leadership. That Nazi Germany and Imperial Japan recovered from the Great Depression faster than their democratic rivals convinced nations around the world of the superiority of their model. So far, the Chinese government has failed to exploit what would seem an insurmountable advantage: the incompetence of the Trump administration. China’s international response to the crisis has mixed contempt (in the form of worthless medical aid) with bullying (as when China threatened Australia and the European Union to halt efforts to study the virus’s origin), resulting in growing calls in the United States, Europe, and Asia to decouple from China, defeating what hopes they might have had of replacing the United States as the world’s leader.

These failures only compound one of China’s longstanding foreign policy dilemmas: That it offers no vision of a new global order that appeals to anyone other than corrupt autocrats. In contrast, by the late nineteenth century, America’s political, economic, and cultural ideals had so penetrated the world that many felt the world was becoming “Americanized.”

There can be no doubting that America’s international standing has been undermined by ill-considered wars and the deadly failures of Trump’s pandemic response. However, the intrinsic strength of the United States will, like that of Britain a century ago, enable America to retain its dominance. Like Britain, it will require a far more dramatic series of shocks than what it has recently experienced for Washington to lose its central position in the international system.

Gregory Mitrovich is a Research Scholar at the Saltzman Institute of War and Peace Studies at Columbia University. His current book project is entitled Uncommon Challenger: The Epic Story of the Rise of the United States from the War of 1812 to the Second World War.