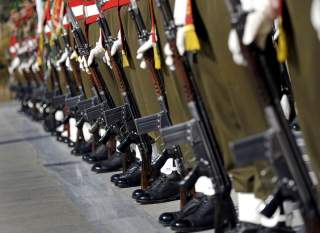 In the Arabic language, the word inqilab means “coup.” But as a loan word incorporated into Urdu, the official language of Pakistan, it means “revolution.” And so it is quite fitting that some of the most vocal voices calling for inqilab or revolution today in Pakistan are in actuality inviting a military takeover.

On Thursday, the Pakistan Army’s commitment to democracy in Pakistan may face a major test when up to a million protesters representing nearly half a dozen political parties (most of whom have little to no presence in parliament) attempt to march onto Islamabad and hold a sit-in there till the government’s fall. To stifle the protesters, the civilian government in Islamabad, led by Prime Minister Nawaz Sharif, who heads the majority faction of the Pakistan Muslim League (PML-N), has imposed section 144 of the Criminal Procedure Code in Islamabad, prohibiting public gatherings in the capital. Sharif has also handed over security of some of the city’s sensitive installations to the army, which could be part of a series of moves by the prime minister to compel the army to take his side publicly, though one report states that the transfer of security was done at the army’s request.

It appears that both sides in this intracivilian dispute are, to varying degrees, attempting to reel the army in. One major faction of the opposition to Sharif, the Pakistani Tehreek-e Insaf (PTI) party, led by ex-cricket star Imran Khan, seeks electoral reforms, a full recount of last May’s polls (which he alleges were rigged), and the resignation of the Sharif government. Khan’s August 14 march on Islamabad is a ploy to induce early elections—something that the current government might only agree to if the army is forced to intervene amid chaos. The second major opposition faction, the Pakistan Awami Tehreek (PAT), led by Allama Tahir-ul-Qadri, a Pakistani-Canadian religious cleric, has called for a full-scale “revolution” against Sharif and Pakistan’s ruling class. With zero parliamentary seats and a small, albeit devoted, public following, PAT’s goal appears to be to create enough trouble to force an old-fashioned army coup.

Unintentionally, the PML-N has aided PAT in pushing Pakistan toward turmoil that could create a political entry point for the army. Prime Minister Sharif has adopted a “divide and rule” strategy toward PAT and PTI, ignoring the former and seeking dialogue with the latter. The approach had been working till the Punjab provincial government, run by Nawaz’s brother, brutally crushed a PAT protest in Lahore in mid-July. Over a dozen PAT activists, including innocent women, were killed by the provincial police and a goon tied to the ruling party. The carnage in Lahore heavily damaged the PML-N’s credibility and breathed life into the movement of Qadri, a political zero who failed in his efforts to dislodge the previous government last year, giving him legitimate grievances to be aired on talk shows and in meetings with politicians.

While both PAT and PTI share an animus toward the present government, they are also competitors, whose anticorruption and antisystemic messages and target audiences are similar. Moreover, PAT and PTI differ in their commitment to democracy. PAT has no future in a democratic system; it seeks a nonpartisan caretaker setup to cleanse and fix Pakistan. Whereas PTI might have supported such a measure in the past, it is now more committed to electoral democracy after a strong showing in last year’s elections. It is the third-largest party in the National Assembly and governs one of Pakistan’s four provinces.

But PTI is also a maximalist party, whose sixty-one-year-old leader is as impatient as his youthful support base. It wants to rule at the center and appears unwilling to wait three-and-a-half years for another shot. To win at the national level, PTI must bring the Sharifs down in Punjab, their political base and home to over 50 percent of its directly elected National Assembly seats. As a result, PTI is focusing its current agitation in the Punjab province and is pushing for fresh polls with greater safeguards against voter fraud.

Imran Khan is his own man. He wants his party to form the next government after free and fair elections. And so he’s tried to maintain some distance between himself and the rabble-rouser Qadri. But the PAT leader unilaterally decided on Sunday that he will merge his August 14 rally with Khan’s. The net effect will be much larger protests on August 14 and more trouble for the PML-N. But there is also risk that Khan may lose control over the situation. With the entry of irreconcilable forces from PAT into his protests, Khan might be forced to take a harder line with Sharif. Khan’s young supporters bought into a movement they thought would control all of Pakistan and bring tabdeeli (change) and inqilab. They have neither the acumen for, nor interest in the niceties of political compromise and gradual change, which they dismiss as muk-muka or underhanded deals.

The elephant in the room, of course, is the army. Officially, it has maintained a professional distance from the political mess. Many allege, without much proof, that it has been pulling the strings behind the antigovernment campaign of Khan and Qadri.

Civil-military relations in Pakistan have been tense since late last year. The army opposes the Sharif government’s decision to try former military ruler Pervez Musharraf. It has been discomfited by the PML-N’s push for rapprochement with India. And it has regarded the government’s pursuit of negotiations with the Pakistani Taliban (prior to the start of military operations in June) as appeasement. Tensions between the Sharif government and the army boiled over in the spring when—in the wake of a war of words fought by cabinet ministers and pro-army commentators—television news anchor Hamid Mir, a vocal critic of the army, was shot by unidentified assailants. Mir’s network, GEO News, blamed the attempted killing on the Inter-Services Intelligence (ISI), and the civilian government was forced to suspend the channel, with which it had been closely allied.

Presumably, bad blood between the civilian government and the military remains. But there is no indication that the army seeks to directly rule Pakistan. It is overwhelmed with countering the Taliban insurgency; and much of its foreign aid is contingent upon the presence of a democratic government.

There are, however, softer coup options for the army. A violent clash in Islamabad provides it with the opportunity to intervene by either forcing the government to resign or mediating a settlement between the warring civilian factions. In the latter scenario, the current army chief, Gen. Raheel Sharif, would be showered with praise in the Pakistani media. He could obtain the requisite leverage over the weakened prime minister to push his own national-security policy, and at the same time, build his public image, should he have dreams of praetorian rule down the road.

It is in Pakistan’s interest to ensure that a military intervention, hard or soft, never takes place. The PML-N government has fallen short of expectations. But it is no abysmal failure. And there are no grounds for its dismissal. Unlike the previous government, there have been no major corruption cases. The PML-N has the confidence of many key foreign partners, including the Chinese, who are keen to push forward up to $40 billion in energy and infrastructure investments. The Karachi Stock Exchange, prior to this week’s crash, had continued to establish new record highs, with its main index, the KSE-100, surging over 40 percent in a little over a year. On Monday, the KSE-100 dropped nearly 5 percent, due to the ongoing instability and in spite of solid earnings reports from publicly traded companies included in the index.

Reforming Pakistan, a nation of 190 million people, is a long project that requires continued democratic rule and political reform. Last year’s general elections—which were largely free and fair—marked the first transition of power from one democratically elected government. But if the current government falls and PTI comes to power, Pakistan will be locked into another cycle of political instability, with the PML-N pursuing vengeance against PTI.

If the PML-N has learned from its mistakes earlier this summer, it will refrain from using violence against peaceful protesters this week; open up a line of communication with Imran Khan; and agree to fast-track electoral reforms, perhaps including a wider electoral recount. Prime Minister Sharif’s announcement on Tuesday of a commission composed of three Supreme Court justices to review last year’s polls is a step in the right direction. But the obstinate Khan has said that the commission would be acceptable only if Prime Minister Sharif resigns. Prime Minister Sharif can emerge from this round unscathed if his government does not obstruct peaceful protest, maintains the support of other major political parties, and makes a good-faith effort to address Khan’s concerns.

Above all, the Sharif government must seize the initiative and prove to Pakistan’s many democracy skeptics that civil, democratic rule can work in Pakistan. Parliament, including its dormant committees, needs to become the central forum in which government officials are held accountable and policy issues are debated. As it stands, parliamentary attendance rates and committee-activity levels are dismally low. Yet Pakistan’s parliamentarians have no problem showing up in Islamabad television studios to appear on nightly talk shows on the country’s twenty-plus news channels.