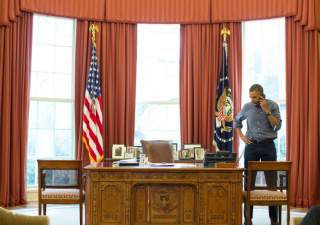 Earlier this month, while in Berlin to mark the 25th anniversary of the fall of the Berlin Wall, Henry Kissinger sat down for an interview with Der Spiegel. Among other things, Kissinger decried a possible new Cold War: “I think a resumption of the Cold War would be a historic tragedy. If a conflict is avoidable, on a basis reflecting morality and security, one should try to avoid it.” Also in Berlin to mark the occasion was Mikhail Gorbachev, who warned that “the world is on the brink of a new Cold War…some say it has already begun.”

That the United States is now engaged in a fresh Cold War should not really be in doubt. That decision was announced not in a major presidential address, as it should have been, but rather stealthily—via a report by Peter Baker in the New York Times in April. It was then that the administration first revealed its intention to isolate Russia.

There are of course some obvious differences between the first Cold War and today’s—the most obvious being that Putin’s Russia does not command suzerainty over Eastern Europe. Instead, much of it belongs to NATO.

That, in a sense, is the good news. Putin’s Russia is not the Soviet Union and pretending that a reconstituted Red Army will be rolling through the Fulda Gap at any moment isn’t going to make it any more likely to happen. But what’s missing, I think, is a vigorous debate about how to approach Putin’s Kremlin. This is anomalous, or at least very different from the previous Cold War.

For in the four decades preceding the fall of the Berlin Wall, there existed a considerable range of views as to how to carry out American-Soviet relations. Roughly speaking, at any time during the first Cold War, you could find intellectuals, pundits and policy makers on the Right who were what I would call “hawkish hawks,” like John Foster Dulles and Paul Nitze, and “dovish hawks” who were pro-détente Republicans, like Kissinger and Nelson Rockefeller. On the Left, again, roughly speaking, you had “hawkish doves,” like Dean Acheson and McGeorge Bundy, and “dovish doves,” like Ted Kennedy and Walter Mondale. This taxonomy isn’t perfect, but it does capture the fact that there were multifarious views about how to approach the Russia problem.

Aside from that, there were also organized lobbies like the pro-detente American Committee for East-West Accord arrayed against groups like the Committee on the Present Danger, which was formed in the 1970s to challenge the Nixon-Kissinger detente with the Soviet Union. Nitze and others said that it amounted to a policy of appeasement. What was needed was peace through strength—a sentiment that Ronald Reagan championed in 1976, when he challenged Gerald Ford for the Republican nomination, and in 1980, when he unseated Jimmy Carter. The intensity of the debates of yesteryear was a reflection of the seriousness of the challenge the United States faced.

Nothing like this, I’m afraid, exists in Washington today. One reason the hawks tend to enjoy a stranglehold on foreign policy may have to do with the decline of what was formerly known as Cold War liberalism. Early on, intellectuals in America, like Sidney Hook, and in Europe, Raymond Aron, recognized that Western institutions had to be vigorously defended against the degradations of Stalinism. Cold War liberalism was, in essence, defensive. So, too, hard as it is to believe today, was the original iteration of neoconservatism. Former Cold War liberals in good standing began to embrace conservatism not out of a desire to spread “democracy” to all corners of the globe, but rather out of disgust with the tactics of the soixante-huitard.

To get a sense of just how deeply offensive some Cold War liberals found the politics, to say nothing of the behavior, of their “baby boom” students, consider the following passage from Saul Bellow’s 1970 novel Mr. Sammler’s Planet:

These poor kids may have resolved to stink together in defiance of a corrupt tradition built on neurosis and falsehood, but Mr. Sammler thought that an unforeseen result was loss of femininity, of self-esteem. In their revulsion from authority they would respect no persons. Not even themselves.

Neoconservative polemics in praise of the American empire only came later. Yet the transformation of many Cold War liberals into what are today’s most alarmist anti-Russia hawks is perhaps one of the more troubling of the post-1989 legacies.

How did this happen? Part of the answer lies with the triumph of the Democratic Leadership Council in the early 1990s. Though not widely remarked upon today, the Clinton-Gore-Liebermann “centrists” colluded to, in effect, gut the Democratic Party’s dovish wing. Bill Clinton—in embracing the Manicheanism of the coldest of the Republican cold warriors—cleared the way for today’s bipartisan Cold War consensus.

No doubt, like much that he did, Clinton’s evisceration of the McGovern wing of his party was likely the result of a purely political calculus. It may have seemed like a good idea at the time. But Mr. Clinton has much to answer for; not that we should expect him to do so. Why start now?

In the meantime, America’s governing institutions continue to ossify. In lieu of seeing to the health of their own country—plagued as it is by a collapsing infrastructure, unimaginable inner-city violence and a general collapse of decorum aided and abetted by, among other things, the Facebook juggernaut—our governing elites are focusing on muscle-flexing abroad.

James Carden is a Contributing Editor at The National Interest.