Beware the Tides of War with Iran 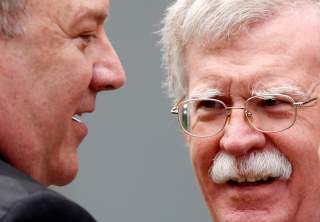 Most wars begin with the swirling tides of “war talk,” as war advocates seek to inure the public to the notion that an armed conflict is possible, desirable, and justifiable—if not inevitable.

America is in the throes of it right now. Those in Washington who have devoted their careers to pushing regime change in Tehran whatever the cost are exerting their influence and demonstrating considerable savvy to “normalize” the idea. The American people are being told that because Iran is an inherently hostile and destabilizing menace, war with Iran is a reasonable course of action.

Is it reasonable, however, to launch a “preventive” war with a country like Iran when the United States has other policy options at its disposal? As important, is it reasonable for a nation that has sacrificed so much money, lives, and resources in the Middle East for close to a generation to start another war—particularly given the recent track record of American military intervention?

U.S. presidents since Harry Truman have shown how destructive and irresponsible the decision to go to war can be when it’s made unilaterally. Plunging the nation into war without the full, open, and honest national debate the Constitution mandates, is not only a violation of what the founders prescribed but a reckless choice that usually produces unforeseen outcomes. Too many presidents have considered themselves wiser than the constitutional structure the founders created. And each, arguably, has felt the consequences.

The president will cite his Article II powers to defend and protect the American people from threats foreign and domestic as more than enough before engaging in a warlike action. Congress over the years has too frequently accepted this interpretation with barely a question asked. Too many lawmakers have bought into the notion that they are back-up players to the president’s star power. Others have chosen to duck and weave from a serious debate for political expediency; why, after all, vote on the most serious question a nation can ever make when you can stay in the background and opine from the sidelines?

America’s founding generation would be rolling in their graves. After all, the Constitution grants the Congress with the power to declare war—not the president.

As the Vietnam War was closing, the legislative branch attempted to rebalance the system by passing into law the 1973 War Powers Resolution. The law allows the president to commit U.S. troops in combat for up to ninety days, at which time the president must get congressional approval for further action either through an authorization for use of military force or a declaration of war. If such authority is not given, then our law requires U.S. troops to withdraw from the conflict.

The justification for the War Powers Resolution was the perceived necessity, in these modern times, of providing the president with the ability to respond immediately to a crisis. The law sought to enable fast action but deprive the president of unilateral and unlimited war-making power associated with kings and monarchs.

The founders understood that war is serious business and should not be started with shortcuts. A decision to enter a nation into war was too weighty a responsibility to be entrusted to one person; if the country was to go to war, then the entire nation should be involved in the deliberations. This is exactly what a war declaration was supposed to achieve.

There does not appear to be an instance where any U.S. president has actually abided by the War Powers law. Once U.S. troops are in, they’re in until the president pulls them out. Congress has never shown the constitutional integrity or sheer guts to force the issue.

And here we go again, with U.S. military forces barreling towards another conflict in the Middle East—some of the very same war hawks (notable for having avoided service in combat themselves) maneuvering the president toward trouble.

There is no need to start shooting at Iran. Indeed, if you thought the war in Iraq was a difficult slog, then a war with Iran would be infinitely harder.

The United States should instead be using all of its diplomatic power to reduce tension before a minor miscalculation turns into a major conflagration. Rather than suspecting that Iran wants to get into a fight, Washington should listen to the words of senior Iranian officials like the Supreme Leader, who hopes to avoid a conflict.

The Washington foreign-policy elite will make the case that Iranis an implacable adversary that wants regional hegemony; that its nuclear weapons development is an imminent threat and that the current crop of rulers in Tehran cannot be reasoned with. Other people will comment that the maximum pressure campaign against Iran’s economy is not working well enough or fast enough, and that more aggressive options may be necessary.

All or some of that may be true. But none of it justifies the American people tolerating their president’s carting them off to yet another foolhardy war against an “enemy” that can be dealt with through less coercive means.

If the administration doesn’t get smart, then Americans may experience the same sorry process that is no more thought through than the strategic tour de force that has brought them the wars in Iraq and Afghanistan.

Maj. Gen. Jeffrey E. Phillips retired from the U.S. Army with thirty-seven years of service; he now directs a Washington-based not-for-profit that supports the military’s reserves and National Guard. Daniel R. DePetris (@DanDePetris) is a columnist at the Washington Examiner and the American Conservative. All views expressed are the authors’ alone.