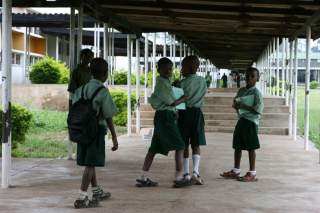 The recent kidnapping of schoolgirls in Nigeria by the Islamist militant group Boko Haram is putting the spotlight on the problem of human trafficking in Nigeria, a scourge that has existed for some time and reaches far beyond Boko Haram. Nigeria is currently ranked as a “Tier 2” country by the U.S. State Department’s Office of Trafficking in Persons (TIP), which signifies a middle range of success in combating human trafficking but with room for improvement. However, the tier rankings can be imprecise indicators that conflate various concepts, including trafficking severity and policy response, obscuring deeper patterns in trafficking.

To get a clearer picture of the human-trafficking challenges in Nigeria, we analyzed recent reports on the subject to get a better sense of the situation.

As horrific as the kidnapping threat posed by Boko Haram is, human trafficking in Nigeria is far more widespread and has been for some time. In 2012, the Nigerian government and NGOs identified 480 victims of trafficking. Although likely a large undercount of the actual number of victims given frequent under-reporting and the often hidden nature of the crime, this is nearly double the number of girls that were taken by the militants in Borno state. There are also diverse forms of both types of trafficking and victim profiles. Women and girls are trafficked for domestic servitude and sex trafficking, while boys are forced into street vending, domestic service, mining, agriculture and begging.

A Hub for Trafficking

Nigeria is a hub for human trafficking, with victims being trafficked both domestically and outside the country. According to our research, Nigerian victims have been trafficked to 33 countries in recent years. They have been trafficked throughout West Africa to countries such as Ghana and the Central African Republic and, although trafficking of Nigerians to the United States is not especially common, there are extensive human-trafficking flows from Nigeria to Europe. Nigerian human trafficking victims have been reported in 20 European countries, including Spain and Germany, and even countries such as France, which are currently rendering assistance to Nigeria to investigate the missing girls. Additionally, children from Benin, Ghana, and Togo are trafficked into Nigeria and forced to work in industries such as granite mines.

As recently as 2011, Nigeria was actually ranked among the top countries by the U.S. State Department’s TIP report for making serious efforts to address the problem of human trafficking (in the same tier as countries such as Denmark and Canada). Nigeria has a functioning, albeit under-funded, bureaucracy to fight human trafficking in the National Agency for the Prohibition of Trafficking in Persons (NAPTIP). However, Nigeria’s progress may have been exaggerated, and in more recent years, Nigeria has seen policy backsliding, falling from Tier 1 to Tier 2. This is related to only minimal increases in funding, failure to enact stricter penalties against traffickers, and the remaining difficulties of the national police to identify trafficking victims. The public pressure surrounding the Chibok kidnappings could spur the Nigerian government to pursue additional human-trafficking policy initiatives.

Recovering from the trauma associated with being a victim of human trafficking often requires access to medical, psychological and legal services and vocational training. The Nigerian government offers protection services for victims of human trafficking and has funded eight shelters that can provide services for 293 people. However, access to these services may be more limited in the country’s less developed rural areas and additional resources and capacity may be required to provide treatment for any of the girls that are recovered from Boko Haram.

Nigeria’s recent record of arresting and prosecuting human traffickers has been mixed, but it is improving. In 2012, the Nigerian National Police and NAPTIP conducted 117 trafficking investigations and successfully convicted twenty-five traffickers. The Nigerian government has also conducted trainings in collaboration with foreign governments and international organizations. However, the northeast Borno state from which the girls were taken has porous borders with Cameroon and Niger, and it is not clear how well trained the military units or border-patrol officials deployed to the region are in identifying and dealing with cases of human trafficking. Any Boko Haram members involved in the kidnappings and human trafficking that are captured will certainly face intense scrutiny. Still, the Nigerian government may require additional resources and international assistance to efficiently bring them to justice and send a deterrent signal to other would-be traffickers.

In sum, the problem of human trafficking is widespread in Nigeria. While the government has made some progress in addressing the problem, it can still do more to prevent trafficking and protect victims. The Boko Haram kidnappings only underscore this point.

Lauren Jekowsky is an M.A. Associate of the Human Trafficking Center at the Josef Korbel School of International Studies at the University of Denver.

Oliver Kaplan is an assistant professor at the Josef Korbel School of International Studies at the University of Denver where he is the Associate Director of the Human Trafficking Center.