Beyond Bombs, Rockets and Rhetoric: What Is the Endgame for Gaza? 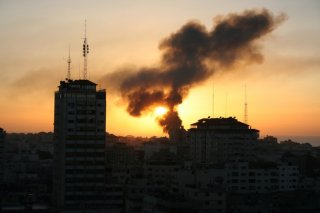 The humanitarian disaster in Gaza is mounting as the conflict drags on and intensifies. The UN OCHA figures show as of July 29, 1,118 Palestinians have been killed—at least 74 percent of them civilians.  Fifty-six Israelis have died—95 percent of them were soldiers and three were civilians.  These figures, tragic as they are, don’t come close to showing the full physical and psychological impact of the last several weeks. Both sides are now on a war footing. Reasoned debate about the future of Gaza and indeed the broader related questions about the future of Palestine is lacking. Seven steps need to be taken to begin to find a solution that can lead to a more lasting and sustainable peace.

An end to military hostilities is critical. However, even if a negotiated ceasefire proves illusive, all sides must stop threatening and killing civilians. This can be done unilaterally. Israel can stop its massive targeting of homes and civilian structures and it can stop deflecting responsibility for collective punishment of a caged-in population with nowhere to run. Hamas and other groups can stop the controversial rocket barrage and putting Palestinian and Israeli civilians at risk. The tragedy is that ultimately, this crisis will end with a negotiated settlement. Why not talk now and avoid the death, injury and displacement of scores more civilians? Leaders in the region and internationally should prepare the ground, keeping in mind the need for intermediaries both sides can accept.

2. Permanently end the siege of Gaza

It is impossible to keep 1.5 million people in Gaza’s virtual jail without expecting the situation sooner or later to erupt. The siege must be lifted. Egypt should normalize the border and Gazans should be allowed to travel in and out of the strip. The list of goods that are not allowed into Gaza should be reexamined and the transit of goods through the Rafah border should be made easier. Increasing economic development and democratic freedom in Gaza is a much better alternative way to address Israeli security concerns. As an urgent humanitarian step, medical and building supplies should be provided immediately to Gaza.

Israel has been trying to derail Fatah-Hamas reconciliation and the recent creation of a unity government, which ironically brought Gaza under central Palestinian control. Support should be given to Palestinian efforts at reconciliation and to increase transparency and good governance. Communication between Palestinian leaders in Ramallah and Gaza should be facilitated, guaranteed and regularized, not restricted.

Through its obstructive actions, Israel has, in effect, ended the alternative represented by Abbas, who supported and believed in negotiations. The reconciliation agreement had regained the moderate Abbas popular support among his people. This bounce was greatly needed after Israel gave Abbas nothing through negotiations, refusing even an American request to freeze building more Jewish settlements in the heart of the West Bank.

Israel’s recent actions have further complicated the tensions surrounding the security cooperation between the Palestinian Authority and Israel. This has driven a further wedge between the people in some areas and the Palestinian Authority, which could in the long term have a rebound effect if Israel is seeking to create disaffection of the people with Hamas. It is not in Israel’s strategic interest to further destabilize the Palestinian street. By ordering the banks in the West Bank not to transfer the salaries to Hamas government employees in Gaza and threatening the banks with sanctions, some say Israel pushed Hamas to react.

Following the kidnappings of three Jewish settlers in the West Bank, Israel widely targeted people connected with Hamas without showing any significant evidence of Hamas direct involvement in the killings. This further goaded Hamas leaders to revive angry rhetoric and actions. Israel’s attempts to bring down Hamas without an alternative are destined to fail. Operation Protective Edge in Gaza is the third military operation by Israel that aims to weaken Hamas. These violent rounds, at irreparable cost to civilians—including children—and infrastructure, have not offered a long-term solution.

4. Save the two-state solution while you still can

Israel’s obstructive stance on reconciliation is pushing many moderate Palestinians to believe the only option now is the one-state solution, which is contrary to the strategic interests of Israel. Israelis should question why their leaders are destroying chances for a two-state solution, which is still the priority of the vast majority of Palestinians, and still considered to be in Israel’s best strategic interests. Thinking it might be possible to separate Gaza from the West Bank and East Jerusalem by pursuing a ‘three-state’ solution, if that is what some Israelis are considering, is not a viable option. Israelis should ask their leaders to honor international law and respect the 1967 borders. Continually expanding settlements contribute to Palestinian fears that they are witnessing an Israeli land grab.

There is a growing consensus among humanitarian organizations that Israel’s current Gaza operation is violating international humanitarian law. These claims demand immediate attention.

The conditions throughout Palestine and Gaza in particular are unsustainable. Basic civil liberties are being denied. Israel’s policy of administrative detention, control of water resources, freedom of movement and the lack of access to medical resources are human rights issues that need to be addressed by the international community.

6. Craft a plan for the reconstruction of Gaza

International inaction has contributed to this current crisis. Influential foreign leaders should visit Gaza to assess humanitarian needs and help define steps for its economic development, including a possible seaport and airport. The EU should implement the European Union Border Assistance Mission in Rafah and look again at its policies regarding settlements. With support, Palestinians could seek recognition in other UN bodies and other international agencies, including the International Criminal Court.

7. Change the narratives to include nuanced positions

Moderate voices need oxygen. Narratives must change to reflect the nuances and plurality of voices in the various communities. President Abbas is a leader with the ability to create peace. Sadly, Israel has now severely weakened him, possibly killing chances for a deal anytime soon. The chair of the Palestinian Legislative Council, Dr. Aziz Dweik has been rearrested, despite his proclaimed support of nonviolence. Now Hamas’ popularity has risen in the occupied territories and among Palestinians in Israel. The option of resistance has become so popular, given the failure of negotiations. Fearing a third Intifada, Abbas and his advisors have shifted. The Jewish community around the world could send stronger signals to Israel to change its policies. The media should explore a more sophisticated understanding of how current events impact the future of Palestine. The last thing Gaza needs is more inflammatory rhetoric, bombs or rockets. Gaza needs a policy.