Biased Mediators: The End of Israeli-Palestinian Peace Talks, and How It Happened 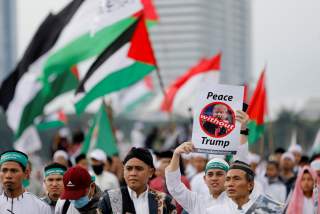 Palestine’s titular president recently declared the end of American mediation once and for all because it is “completely biased toward Israel.” President Donald Trump’s provocation to move the U.S. Embassy from Tel Aviv to Jerusalem clearly forced Palestinians to take bigger stock of America’s exhaustive, if not suffocating, presence as mediator over their fate. Despite never agreeing on much, it seems all Palestinian political factions—at least for now—want to be done with the United States for good. The burden of halting Israeli colonization and enabling Palestinian freedom should now fall to the United Nations and the European Union, which has already begun economic sanctions against Israeli goods made in illegal West Bank settlements. All should join Palestinians in saying “good riddance” to any future American-dominated efforts. The reasons are too many to list here, but the most obvious is owing to the flawed supposition that the United States could in practice succeed in spite of its pro-Israel bias (or as some wrongly believed, because of it).

The scholarly architecture of “biased mediation” was developed in the 1970s by the late Israeli professor Saadia Touval, who argued that mediator bias could be a helpful asset in conflict resolution. The argument is that a party enjoying bias would be prone to take advice from its trusted ally acting as mediator. A biased mediator could also be counted on to offer superior insights into the parties in conflict, who might lack information about each other or suffer from jaundiced eyes. And because the favored party would theoretically try to preserve its special status, it would therefore prove forthcoming. The same would apply for the disfavored party. With three parties in the mix, and a dyadic alliance between biased mediator and its favored party, the isolated and disfavored party will work overtime to be “forthcoming” in hopes it will “drive a wedge” between the two longtime friends—a form of bargaining leverage to generate the compliance of the disfavored, weaker party.

A 2008 obituary for Touval mentioned that his biased mediation theory had influenced Dennis Ross, who led U.S. negotiations on the Arab-Israeli front from 1992 until 2001, and Aaron Miller, who served as Ross’s deputy throughout. Ross would quote from Touval in his 2007 book about “Statecraft” while Miller, taking a more self-critical line, editorialized in 2005 how he felt that Ross and his colleagues (himself included) were less mediator and more “Israel’s lawyer” for their “catering and coordinating with the Israelis at the expense of successful peace negotiations.”

Numerous independent accounts and scholarly works have autopsied the negative influence of Dennis Ross as well as Martin Indyk, the latter who twice served as U.S. ambassador to Israel, on the overall American peace efforts. Both Ross and Indyk co-founded an AIPAC-spinoff think tank and were counted on by President Bill Clinton to lead an effort to “stop pro-Arab bias” among Foggy Bottom diplomats. In all his career, Dennis Ross would broker a single agreement—the 1997 Hebron accords. This was the disastrous deal that disproportionately divided Hebron to favor Israeli settler extremists there with a stranglehold over Palestinian life. Indyk brokered nothing and even had his security clearance suspended, at one point, for among other things allegedly discussing classified national security information in the presence of Israelis. Both Ross and Indyk would also make return appearances under the Obama administration, Ross from 2009–11 (where he meddled in the efforts of Senator Mitchell, a man actually renowned for conflict resolution) and Indyk as lead envoy from 2013–2014 (where Israeli Prime Minister Benjamin Netanyahu marginalized him, at least partly because of Indyk’s longstanding support for Likud’s rival Labour Party).

Following the trajectory of their biased mediation, it is clear a two-state solution was largely snuffed out during their tenures, in no small measure because the sham process they presided over was all procedural process while the stronger Israeli party used the machinations as smokescreen to consolidate facts on the ground through brute force. In the cold light of morning the numbers show how they succeeded: Israeli settlers in the West Bank skyrocketed from 200,000 in 1993 to 600,000 today, despite every U.S. President from Lyndon Johnson to Barack Obama demanding an end to settlement expansion.

This only goes to demonstrate the perverse fallacy of American political ability to “deliver” Israel—which is supposed to be the key benefit a biased mediator brings to the table. In fact, if anything the Arabs today believe the reverse: that only Israel can deliver the Americans. This explains why Saudi Arabia, Egypt and Arab autocracies today work quietly with Israel and its lobby, in part to get a good scorecard with the U.S. Congress—which remains deeply in capture to any given Israeli prime minister. Israel wields this “high-power” over the future welfare of U.S. politicians via its American lobby cutouts, AIPAC and other extreme iterations, which exploit campaign finance laws to preserve hegemony. Contrary to Touval, Palestinians can never realistically hope to “drive a wedge” between the United States and Israel, particularly in the present anti-Muslim political climate, and so will perpetually be ganged up on by the U.S.-Israeli alliance. Palestinians have only themselves to blame for not ending this abusive relationship. They have long known that political declarations at AIPAC each year—bipartisan oaths that there will never be “daylight” between the United States and Israel—were not just political slogans but a symptom of their toxic relationship.

Neither Ross nor Indyk—or anyone advocating biased U.S. meditation—ever answered how pro-Israel bias added any value toward actual peacemaking since the Oslo process started. Far from providing “superior insights” about Palestinians to the Israelis, from the 1990s until today the Israelis nearly always knew and understood Palestinians far better (and vice versa) than their visiting American mediators from Washington. The desire by Israelis to avoid having Ross or Indyk throw up their pro-Israel “spin” even sometimes resulted in both trying to cut deals behind America’s back. That’s not exactly the kind of outcome Touval had in mind—with the United States being more royal than the king by adopting positions considered by Palestinians as “more Israeli than the Israelis.” Despite the United States committing in the Madrid Conference of 1992 to serve as “honest broker” in the talks, later diplomats would brazenly dismiss that aim. Indyk was quoted several times during his tenure saying “evenhandedness” toward Palestinians is “not even in our lexicon.” Despite years of denying his unfair bias toward Israel, Ross was secretly recorded telling a group of American Jews in 2016 that “We don’t need to be advocates for Palestinians. We need to be advocates for Israel.”

And that’s exactly how Ross and Indyk behaved on several occasions, including at the Camp David summit in 2000, were they even believed Israel’s then Prime Minister Ehud Barak had gone “too far” on issues like Jerusalem and the percentage of territory to be returned to Palestinians. They and other pro-Israeli partisans masquerading as “honest brokers”—Jewish-Americans comprised almost the entire U.S. delegation back then—were instead paralyzed by their own internal soul-searching as Jews whereas the Israelis had far more advanced understanding over what would be needed to end the conflict. Rather than encourage these concessions as a good start, Ross and others were quick to hail Barak as heroic and potentially going too far. They were also self-obsessed in 2000 over Barak’s political countermeasures against their interests should Bill Clinton be seen as pushing Israel too far. Not to forget Hillary Clinton was running for Senate in New York that year and Al Gore was in a tight race with George W. Bush. Both promised to be Israel’s new best friend. Palestinians, with almost no political leverage to equalize American bias, were again made victims by this gross power asymmetry.

Which brings me back to President Trump, and his early appointments of Jared Kushner, David Friedman and Jason Greenblatt to lead U.S. mediation. The Trumpian triumvirates have been lifelong supporters for the extreme right wing of Israel, including American charities that send millions to illegal Jewish-only colonies in the West Bank. That much was well documented and even known by Palestinians from the outset. It has recently emerged that Kushner may even be under criminal investigation for violating the Logan Act by trying to scupper the Obama team’s passing of a UN Security Council resolution condemning Israeli settlements one month before Trump took office. Suffice to say that those willing to violate law (Kushner) and subvert U.S. foreign policy and UN Resolutions (Kushner, Friedman and Greenblatt) by supporting Israeli settlements are not just biased—they are agent provocateurs, or “extremist” mediators.

So why did Mahmoud Abbas, president of the Palestinian National Authority, ever dignify the biased diplomatic charade of Kushner, Friedman and Greenblatt to begin with? Because until now actual American currency was more valuable to Abbas and his U.S.-aid dependent Palestinian Authority than having political currency among his own people. That was until Trump transgressed the mother of all redlines on Jerusalem, not just with Palestinians but the entire Arab and Muslim world. In doing so, Trump has forced Abbas to acknowledge the reality that biased American mediation is the poison enabling continued apartheid and Israeli occupation rather than the antidote to it. And for that, Trump should be thanked.