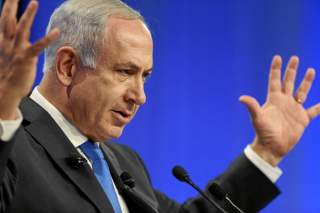 Iran and the six major powers are closer than ever before to reaching an agreement to end the unnecessary crisis over Iran’s nuclear program. When the stakes are this high, sources and credibility matter.

Enter the proverbial boy who cried wolf: Benjamin Netanyahu. Much pomp and circumstance has surrounded the Israeli prime minister’s trip to Washington, but the most important takeaway should now be clear: He is calling for zero uranium enrichment to be allowed on Iranian soil precisely because he knows that it is unachievable – and his real aim is to torpedo the negotiations and fast-track war.

Before departing for Washington on Sunday, Netanyahu, who is running for re-election in Israel’s March 17 election, called his visit a fateful, historic mission” and described himself as “the emissary of all Israelis, even those who disagree with me, of the entire Jewish people.” But Netanyahu’s audacity did not stop at comparing himself to Moses. He went on to use his speeches at AIPAC and the U.S. Congress to continue leaking details of what is in a potential nuclear agreement with Iran – in an effort to get Congress to derail any deal Obama may sign.

The reprehensible nature of Netanyahu’s intervention into an American domestic political debate on matters of war and peace cannot be overstated. His call for zero enrichment would be troubling if it was not insane. Maximalist positions such as the one being pushed by the likes of Netanyahu and his hawkish allies in Congress have been widely acknowledged as unachievable for over a decade. We know from our recent past that pushing for objectives that cannot be achieved is a primary reason why the Iranian nuclear crisis has reached the brink of war in recent years.

The Israeli prime minister knows this too, and that is precisely why he is pursuing such a destructive agenda. Rather than embrace Obama’s quest for peace, he is actively seeking to exert foreign influence over American national security decision-making and revert it back to the George W. Bush years.

Netanyahu remembers all too well how the Bush administration pushed for zero enrichment when it refused Iran’s “grand bargain” proposal in 2003. It clung to that ill-conceived position to torpedo negotiations between the EU and Iran that could have limited Tehran to a few hundred centrifuges. While the U.S. pushed for zero enrichment, it lost real opportunities to stop the growth of Iran’s nuclear program.

Those who accuse Obama of getting a bad deal are the very same people who pushed a policy that resulted in Iran’s rapid centrifuge buildup.

Today, Iran has nearly 20,000 centrifuges. Its nuclear facilities have been fortified to withstand attacks. Perhaps most importantly, Tehran has the knowledge to build nuclear weapons – if it makes the political decision to do so. Thankfully, U.S. intelligence agencies have confirmed since 2003 that Iran has not made such a decision. Rather than acknowledge these realities and negotiate, the Bush administration instead chose sanctions and other forms of pressure that poured gasoline on an already fiery U.S.-Iran conflict. Contrary to Netanyahu’s empty assertions, Iran responded to pressure with pressure – and a cycle of mutual escalation ensued.

President Obama eventually acknowledged that gambling too aggressively on unrealistic objectives such as zero enrichment would likely put America – and Israel – in the worst possible outcome: Choosing between bombing Iran and an Iranian bomb. Obama’s diplomacy with Iran since the election of President Hassan Rouhani has indisputably brought us closer than ever before to verifiably ensuring that Tehran cannot build a nuclear weapon.

That being said, it is due to the likes of Netanyahu and his acolytes in Congress – the type of ideologues who dominated the Bush administration – that today’s nuclear deal with Iran will not have terms as favorable to America as what could have been achieved ten years ago. With that in mind, it is the height of arrogance for such ideologues to peddle their destructive influence with the clear intent of sabotaging Obama’s efforts to build a more peaceful reality.

Sources and credibility matter. Secretary of State Kerry said as much during his Senate testimony when he asserted that Netanyahu has been wrong about Obama’s Iran policy in the past. Israel’s prime minster condemned the interim nuclear deal with Iran when it was signed in November 2013, claiming “Iran got the deal of the century” and the P5+1 had made a
historic mistake.” Later, he begrudgingly admitted that the interim deal helped rather than hurt Israeli interests. Looking ahead, such candor from the Obama administration will be vital to pushing back against opponents like Netanyahu who leak information, lack credibility, and act destructively.

With the truth on its side, the White House can confidently reach a nuclear deal with Iran and sell it to the American people free of spin, based on merit alone: Obama stopped Iran from building a nuclear weapon; kept America out of another war in the Middle East; led a six-country coalition while maintaining unity throughout; and delivered a clear win for American interests.

Senator Dianne Feinstein (D-CA) said Netanyahu’s claim that he represents all Jews is “arrogant.” So too is his blatant intervention into America’s debate over war and peace with Iran. But if you crave war like Netanyahu, it is peace that is an existential threat.