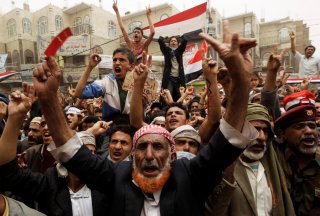 The Biden administration rolled out its first major foreign policy decision by announcing that the United States will halt support for offensive operations in Yemen. Saudi Arabia has heavily relied on U.S. and Western support through the course of the conflict and its ability to continue will be harmed by this announcement. But in order to actually end hostilities in Yemen, more has to be done. Yemen’s absolute devastation needs to be taken into account. For years, Yemen has been, according to the United Nations, the world’s worst humanitarian crisis—an astonishing disclosure considering the state of the world today. Actual death tolls are infrequent and vary. International aid group Save The Children said nearly 50,000 children died in Yemen during 2017 alone. The most recent UN numbers put the dead at 233,000.

Much of this is blamed on a fairly indiscriminate Saudi coalition bombing campaign that was estimated to have targeted civilians roughly a third of the time by 2018. But the biggest problem is what has been called Saudi Arabia’s use of starvation as a weapon that has plunged millions of Yemenis into a prolonged famine. This is why even the disturbing numbers likely understate the extent of the carnage. Assessing the war dead by examining the outcome and collateral damage of kinetic engagements is hard enough, counting individual villagers that have succumbed to famine and malnutrition is a near-impossible task during a conflict. While ceasing participation in war crimes is an end unto itself, there is a dire need for unrestricted humanitarian access, a cessation of hostilities, and a plan to build a viable Yemen. This will not be easy.

First, the United States needs to actually end its participation. President Joe Biden’s address only promised to halt support for “offensive” operations. Needless to say, this is a bit vague. Will the United States only work to protect Saudi Arabia against Houthi rockets? Will it continue resupplying Saudi forces? The use of starvation as a weapon is largely born out of Saudi Arabia halting or slowing arrival ships in Yemen including ones that carry food, fuel, and medicine. They claim this as a defensive measure against arms smuggling. If the United States continues to support this, the worst humanitarian suffering in Yemen is likely still to come. In fact, the top U.S. commander in the Middle East recently made the claim that U.S. support for the Saudi and UAE coalition is already largely “defensive.”

Second, the U.S. mercenaries deployed to Yemen need to go. U.S. mercenary companies have played a role in Saudi and Emirati operations. U.S. espionage and militant mercenaries helping Gulf Cooperation Council (GCC) states are an extremely problematic proposition before one even accounts for how they are facilitating the campaign in Yemen. Whether its Booz-Allen Hamilton contributing to the Royal Saudi Navy in ways that seem to be enhancing their starvation-inducing blockade or American mercenaries carrying out an assassination campaign for the UAE in southern Yemen, these groups operate under the purview of the U.S. Department of Defense and need to be brought to heel.

Third, there is a dire need for a new Security Council resolution. The 2015 resolution (2216) was designed by Saudi Arabia’s Western backers in the outset of the war. It effectively calls for the Houthis to hand over their gains and arms. It basically means that the Houthis and their allies should surrender before their inclusion into the future of Yemen is decided upon by the internationally recognized pro-Saudi Yemeni government whose leader is “universally scorned as a puppet.” The Security Council resolution has served as a barrier to peace in Yemen and needs to be replaced with one that calls for an immediate ceasefire and unrestricted humanitarian access. There are a myriad of issues that the resolution also needs to address such as the unnerving interactions between the coalition forces and al-Qaeda aligned fighters as well as the UAE’s designs on Socotra island.

Fourth, Western countries need to deal with Yemen on its own terms. Constantly framing Yemen as either an extension of their permissive Saudi policy or their combative Iran policy is a path to nowhere. An international contact group can coordinate and also limit the extent to which Iran and Saudi Arabia see Yemen as a battlefield. The Saudis need security assurances and Iran has supported constructive diplomatic talks as even European officials have attested to. They both must limit their involvement in the country.

Fifth, there needs to be a new approach to negotiations to put Yemenis at the center of the dialogue. The Yemen conflict is a complex and multi-sided affair that cannot be settled between Houthis and Saudi proxies. The International Crisis Group, for example, has called for a United Nations lead approach to foster a multiparty settlement and an interim government. Any approach that does not take into account the complex tapestry of Yemeni culture and politics is doomed to fail.

Finally, the issue needs accountability and reflection. It goes without saying that no one should be naive enough to believe that there will be any real accountability here. But Congress and the Biden administration should not be quick to dismiss some kind of soul-searching exercise as to how this happened. The first reason to do this is for the sake of the Yemeni victims. But I’d posit that Washington needs this too.

Without dwelling into a discourse about Just War Theory, it is broadly understood that civilian harm cannot be entirely extricated from war. The amount of civilian harm needs to be understood in the context of the goal being sought and the viability of that goal. If there is no achievable goal, allowing even soldiers to perish is immoral. The international effort to evict the Islamic State from Iraq and Syria caused tremendous human suffering but leaving civilians to languish under such inhuman rule was not a moral alternative. Which brings us to the most maddening question about much of the West’s support for the Saudi and Emirati invasion: Why did they do it and why did they sustain it?

One should not forget that the attitude towards the intervention in Yemen was actually very bullish at the onset. I even witnessed this among some in the diplomatic community at Turtle Bay. The idea was that Saudi Arabia’s Western arms purchases would allow it to replicate many of the same capabilities. Such Western capabilities combined with local Sunni support would make easy work of the Houthis in short order. This would then be a triumphant debut for Saudi Arabia, and for Crown Prince Mohammad bin Salman (MbS), who is likely to rule the country for a generation, as the unquestioned regional ombudsman of the Middle East, rendering timid rival from Doha to Tehran to Ankara. For Saudi Arabia, a decisive victory in Yemen would be in the greater Middle East what the Gulf War was for America globally at the dawn of the unipolar moment. Western countries wanted to be presented positively in this narrative and buy a stake in this new order.

The problem is that his fantasy dissipated quickly. Very early on there seemed to be no real path for the Saudi and Emirati-backed forces to Sanaa and the human toll was escalating. Clearly, having Western arms does not translate to Western capabilities and the capacities of the Houthis were underestimated.

Many have argued that the Obama administration supported the war in Yemen to assuage Riyadh and Abu Dhabi’s concerns of abandonment after the Iran nuclear deal was reached. Even while the United States maintained a large force in the region to protect these countries and had dramatically increased arms sales to them, their insecurity seemed like a bottomless pit—and still does. A theme among arguments made in support of the U.S.-Saudi alliance posits that what is wrong with Saudi Arabia’s foreign (and even domestic) policy comes from insecurity and can only be addressed through U.S. support and reassurances. One could argue that this is consistent with certain canons of the realist school about state behavior but many of the same experts tend to believe the answer to what they find problematic in Iran’s foreign policy is endless confrontation. The point is, by design or default, this became the Obama administration’s foreign policy towards Riyadh.

For the Trump administration too, Yemen was really about confronting Iran and supporting Saudi Arabia. But considering how early in the administration the non-viability of the Saudi campaign was clear, attempting to co-opt the Houthis would have obviously been the more attractive and feasible option—but it was never pursued. There seems to be a sense among some in Western policy circles that Iranian Twelver Shia and Yemen’s Zaidi Shia community whom the Houthis represent are extensions of one another and, therefore, naturally and irrevocably aligned in the great sectarian sorting of the Middle East. If this is true, it is a new reality built by this conflict.

While there has always been some religious exchange, the two communities have been largely estranged over the centuries. For many in the Shia religious establishment and scholarly community in Iran, the Zaidis were a breakaway faction that parted with the branch’s path. For most other Iranians, they are a vague memory from a middle school textbook. According to scholar Mareike Transfeld, in Yemen “until after the 2011 upheavals, the term ‘Shia’ was not used in the Yemeni public to refer to any Yemeni groups or individuals. The Houthis do not follow the Twelver Shia tradition predominant in Iran, but adhere to the Zaidiya, which in practice is closer to Sunni Islam, and had expressed no solidarity with other Shia communities.”