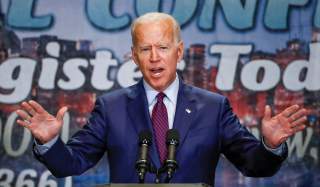 Democratic candidate and former Vice President Joe Biden has been ridiculed for his recent flip-flopping on China, but few have noticed that his original pronouncement actually revealed a disagreement with former President Barack Obama.

Here is what Biden said while campaigning in Iowa in May: “China is going to eat our lunch? Come on, man. . . . They’re not competition for us.”

In New Hampshire, a few weeks later, he reiterated these sentiments: “Our workers are literally three times as productive as workers . . . in Asia.”

In both cases, Biden was characterizing President Donald Trump’s current adversarial approach to China as an overreaction without a strategy. Yet, Biden seems not to recall that back when he was vice president, it was his boss who told everyone that China was going to eat our lunch.

At the beginning of his first term, Obama repeatedly invoked China’s massive, state-directed infrastructure spending to call for more stimulus spending for the U.S. economy. Republicans in Congress who objected were accused of holding back America’s progress vis-à-vis China in the twenty-first century.

Obama was not the only one who felt this way. From New York Times columnist Thomas Friedman to trade union leader Andy Stern, prominent figures on the Left ogled over the Chinese one-party system’s ability to make quick decisions and implement grand plans on everything from building high-speed rail to promoting green energy. Each time, they blamed congressional Republicans for standing in the way of similar massive government undertakings in the United States.

Yet leftwing luminaries never understood that China became the second-largest economy in the world by implementing economic reforms that allowed for more economic freedom, not less, and that even after decades of economic expansion, China’s endemic state intervention continued to impose significant inefficiencies and impeded economic progress.

Where was Biden then? No one remembers him stopping Obama and others from belittling American democratic capitalism to laud a Chinese economic model they barely understood.

A decade later, Biden was eager to express deep faith in the U.S. economy and workers in order to bash Trump’s China policy, but that faith evaporated quickly as he was confronted with backlash.

In light of the broad, bipartisan consensus in Washington that views China as a bad actor in trade, cybersecurity, regional stability, and other issues, Biden was criticized as tone-deaf, if not misguided, for dismissing the strategic threat China posed.

So, he changed his tune.

“We are in a competition with China. We need to get tough with China. They are a serious challenge to us, and in some areas a real threat,” Biden said at a campaign event in Iowa a couple of weeks ago.

Biden’s flip-flop on China is similar to Hillary Clinton’s flip-flop on the Trans-Pacific Partnership in the 2016 presidential election. As Obama’s secretary of state, she supported the twelve-nation free trade pact. Yet facing intense opposition in the Democratic primaries from Sen. Bernie Sanders of Vermont, who opposed TPP, Clinton said no to TPP.

From a policy standpoint, it is not unreasonable to argue that confrontation with China on multiple fronts brings grave risks. It was also not unreasonable to argue back in 2016 that TPP, which brought together America’s friends, allies, and partners on both sides of the Pacific and left out China, was the economic component of America’s strategy to counter China’s rise.

The electorate does not appear to favor Biden’s position today, just as it did not favor Clinton’s position in 2016. Yet running for public office not just about saying whatever it takes to get elected; it is also about persuasion through leadership.

In 2016, Clinton had trouble connecting with and convincing enough Americans to vote for her. On the China issue, as well as on other issues, Biden today increasingly looks like a politician who will talk out of both sides of his mouth, or who might not actually know what he is talking about.

Even more important, the difference between Obama fawning all over Chinese authoritarian chic when he was in office and Trump’s China policy today is that Obama exhorted Americans to emulate China while Trump is unabashedly leading a trade war and other efforts to beat China.

It is not clear that Biden knows the difference.

Ying Ma is the author of "Chinese Girl in the Ghetto," which was released in audiobook in 2018. During the 2016 election, she served as the deputy director of the Committee for American Sovereignty, a pro-Trump super PAC, and the deputy policy director and deputy communications director of the Ben Carson presidential campaign. Follow her on Twitter: @GZtoGhetto.